The son of Nigerian immigrants. The title of this Texas rapper's major label debut, Brandon Banks (RCA, 2019), is his father's alias—the name listed in a federal case that led to his incarceration. Turning a troubled past around—his teenage years without a father and days running with the Crips—this MC's stark storytelling chronicles a rise from abject poverty to critical acclaim. "I don't do any fabricated-ass shit. Everything I'm talking about in my raps is real." Underground legend, Maxo Kream keeps it real. At 191 Toole. Backed by Q Da Fool and REY... Hip-hop/gangsta rap/horrorcore artist Chris Rouleau's adopted stage persona is that of a reincarnated gang member killed in the late 1980s. Out on the Forever Dead And Dirty Tour catch Blaze Ya Dead Homie at House of Bards. A.X.E. and Boonbox are up first...

Akin to a piping hot bowl of spicy pozole rojo—Mexican soul food—that soothes, helping to remedy malaise, The Carnivaleros offer up a rambunctious "Danceroo" to get the hangover started right. At Monterey Court...

Genre hopping, Mexi-Americana singer-songwriters FebboFuentes perform for the betterment of the human soul. In the tasting room at Sand-Reckoner...

Joined by a rotating cast of Tucson's best pickers—tracing back the roots of country music, from the Appalachian Mountains to the flats of Bakersfield—Freddy Parish's monthly residency continues. Dry 'n' Dusty at Exo Bar...

Influenced by afrobeats, dancehall and UK funky, this rising London-based producer's vibrant and melodic tracks fuse together syncopated rhythms from around the world. This edition of El Tambó features Mina. Resident DJs Sonido Tambó spin sides into the night. On the plaza at Hotel Congress...

Smog City indie poppers Raised on TV despondently drag themselves off the couch to bring the Road Dogs Tour to Sky Bar...

Guitarist/lap steel player Joe Novelli (Orkesta Mendoza, The Cloud Walls, Nive and the Deer Children) is known to perform a genre-jumping hybrid of fuzzed out soul-rock, noir-folk, dirty-country and punk-blues, to form a lush musical palette. At Hotel McCoy...

Pelt, Tongs and Soda Sun promise to fill the rapidly cooling night air with diversity. At The Boxyard...

While attending college, recording on his laptop, this young hip-hop artist caught the attention of Bombcity Records, which released his first mixtape, Songs For Debutantes, in 2008. Out of Oklahoma, Jabee is at Thunder Canyon Brewstillery. Sharing the stage with Cash Lansky, Jaca Zulu and Topnax & FonZ. Runt hosts...

With songs about "Stripper Poles" and "Cherry Pop Tarts," Funky Bonz have been "Making It Funky" since 1993. At Saint Charles Tavern...

Jazz saxophonist Autumn Dominguez leads her trio. On the patio at Bacio Italiano...

Multi-instrumentalist Amo "Chip" Dabney joins Rockers Uptown for a night of reggae with an occasional hip-hop twist. At Chicago Bar... 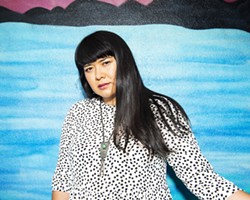 Influenced by alt-rock and Native American traditional music, Katherine Paul grew up on a reservation in Washington state. On her 2018 release, At The Party With My Brown Friends, this Swinomish/Iñupiaq singer-songwriter finds her power as a radical indigenous queer feminist. Black Belt Eagle Scout tells her heart's dreams at Club Congress. Hikes provide support...

This Russian-American band performs a mishmash of funk, surf, rockabilly, reggae, disco and traditional Russian music. "Let's get drunk and funk" being their motto, Igor & The Red Elvises get freaky at 191 Toole...

Flying like an eagle, Miller Time: A Tribute to Steve Miller swings into town. At the Rialto Theatre. "Take The Money and Run"...

The ukulele-driven, gypsy-inspired, whimsical indie-pop of Little Cloud create a microcosm of bitter-sweetness inside a glass of wine. In the Sand-Reckoner tasting room...

They play as if the fate of their very souls were held in the balance. That look of intense passion—along with the same rush of exhilaration they must have felt when jamming these songs out for the very first time—is the reason why this band of veterans continues to draw an audience. The mighty Greyhound Soul return to Che's Lounge...

Driving down a lonesome highway, the sun setting behind a ridge, singer-songwriter June West travels with her Fender guitar, a beat machine and a repertoire of songs that draw inspiration from soul, country, blues and rock 'n' roll. She performs with "Angels in Disguise," Sadgalnina—a 21-year-old R&B singer—and THEM&i, both a part of Ojalá Systems. At Exo Bar...

The Iron Maidens pay tribute to the music of, you guessed it, Iron Maiden. At EncoreTucson. Locals Drop D and Flying Half Full add to the lineup...

Acclaimed guitarist Sharon Isbin in cahoots with the mighty Tucson Symphony Orchestra perform a program featuring works for guitar and orchestra by Wagner, Corigliano and Rachmaninoff. Conductor Case Scaglione is at the podium. At the Tucson Convention Center...

Electronically looping together snippets of funk, rap, jazz and R&B with humor, Mik and the Funky Brunch perform at La Cocina...

All Bets Are On, Volume 39: Nico Mannion and Arizona Host San Jose State/New Mexico State, Pac-12 Superlatives and Picks of the Dragon