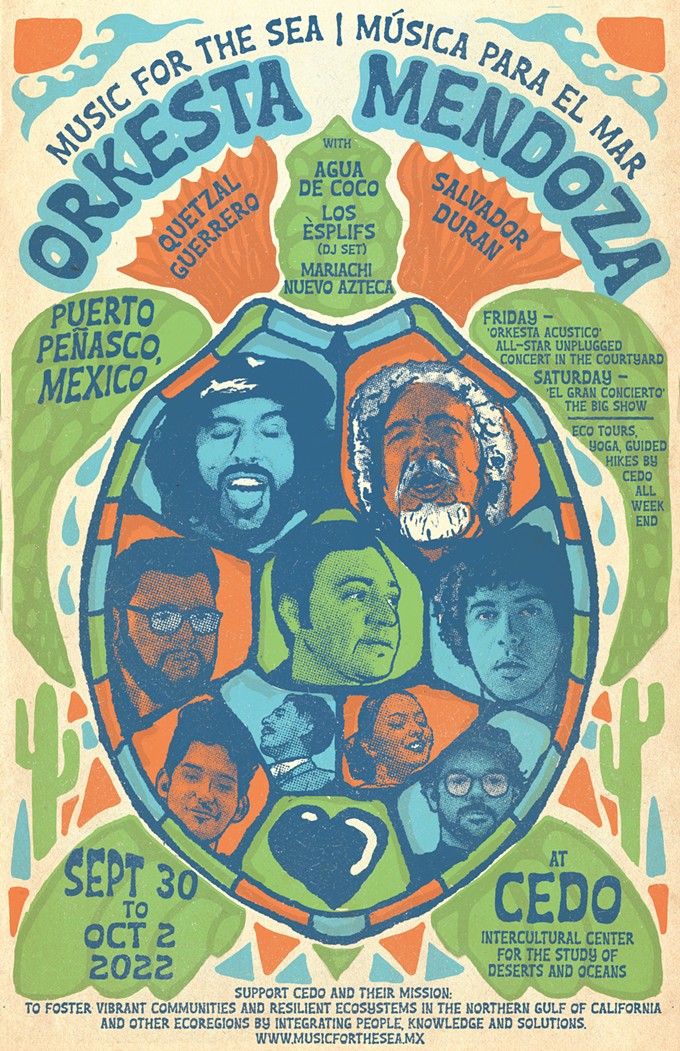 If you like sand, cerveza and Sergio Mendoza, you'll want to be in Rocky Point at the end of September.

The festival will take place over three nights from Sept. 30 to Oct. 2 at CEDO in Rocky Point, aka Puerto Peñasco. The beachside fishing village and tourist town is a four-hour drive from Tucson and Phoenix.

"I'm honored to be part of this bill along with friends from Tucson," Mendoza said in a Facebook post announcing the show.

CEDO—which stands for Centro Intercultural de Estudios de Desiertos y Océanos, or the Intercultural Center for the Study of Deserts and Oceans—has been in operation for more than 40 years. Legions of researchers, students and visitors have passed past the iconic whale skeleton in front of its location in the dunes of housing development Las Conchas to learn more about the delicate ecosystem where the desert meets the sea. A gifted dancer, her body undulated across the stage. 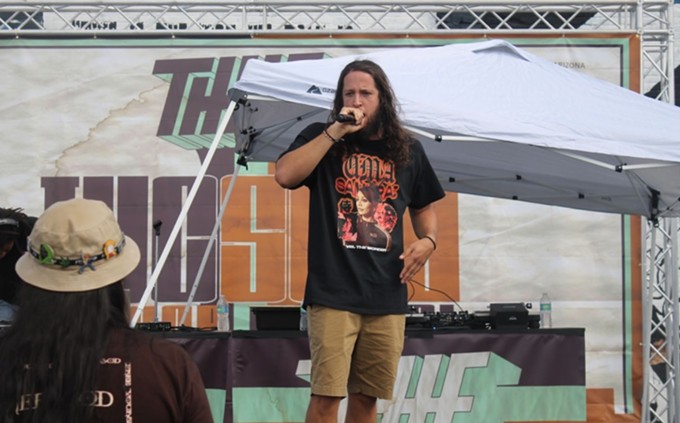 The Tucson Hip Hop Festival returned after a two-year hiatus on March 19 and 20. The two-day event began with a celebration of talent in a block party at 191 Toole, and the second day held educational seminars at the University of Arizona Poetry Center.

“I heard the event was coming back after COVID-19 and I just wanted to come here with the whole community and just have a good time,” local breakdancer Vortex said.

The four elements of hip-hop were showcased and discussed throughout the weekend: break dancing, deejaying, rapping, and graffiti. Artists at the festival were encouraged to push themselves to their limits, with various contests and battles.

“[Graffiti is] the only form of art where the artist never has to touch the surface,” local graffiti artist Yeroh said. “You can be as creative as you want and there’s no limitation for what you can do except for creativity.”

The elements share a common theme of accessibility and freedom, as they stem from hip-hop’s roots in the urban parts of the East Coast, with art being cultivated from whatever resources were available to the creators.

“Hip-hop is both music and culture seated in Black folks’ history and ways of moving through the world presently,” said UA Africana Studies professor Erika Gault. “The more that we understand [hip-hop] and its present concerns then the more we can understand it historically too.”

Gault was among the panelists who spoke during the second day of the event. Discussions included a chronicle of religion, cultural diversity and justice in hip-hop, a conversation on how to cross the urban world as a graffiti artist, a Q&A session with successful music industry figures on what it takes to make it and much more.

“Anybody that I know that is successful, the number one story that they all talk about is just not giving up,” said Juan Fleischer, Nogales native and producer and music engineer for Atlantic Records and Artist Partner Group. “There’s just a lot of stories of the struggle, and the cards can totally be against you, but successful music people turn those cards to make it positive for them.”

Despite much of the community rejoicing at the festival’s return, some attendees also pointed out that there could be room for improvement.

“I think it was fun but it definitely needed more people, more vendors and better space,” attendee Myana Hibbert said. “But this is the first year after [COVID-19] and being closed down so I’ll give them a break.”

But attendees, artists, and panelists alike hope that this is only the beginning for the festival’s return, one they feel Tucson needs.

“A lot of ways when we think about hip-hop we think more about the East Coast, and more recently the West Coast, but never the Southwest,” Gault said. “So the kind of connections and communities that are right here in Tucson and the surrounding areas is really important to showcase.” 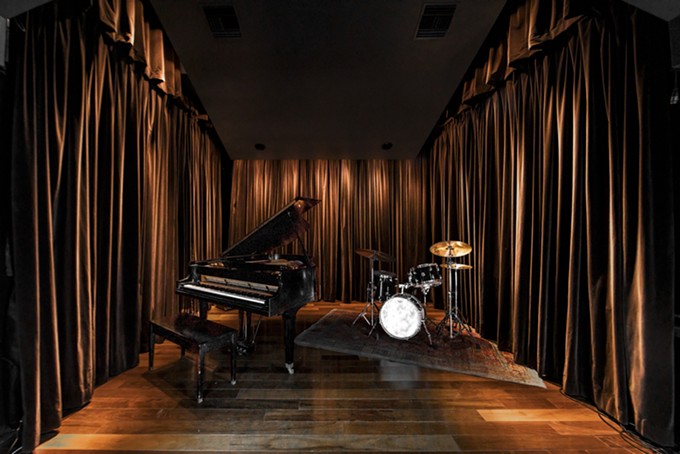 Over the last 100 years or so, Hotel Congress has survived structural fires, seen prohibition come come and go, and hosted everyone from U.S. senators to John Dillinger and his criminal gang. Now, a new addition to the historic landmark fuses a New York night club with a borderlands mezcal bar. After a long absence — since early 2020 when the specter of pandemia intervened, forcing the cancellation of live performances worldwide — the Jerusalem Quartet performed at the Leo Rich Theater this past Wednesday, Oct. 27.

The faint plucking of strings, tuning up backstage, prompted a still the audience held, as they waited in reverence for this internationally acclaimed string quartet to take to the stage.

Once seated, first violinist Alexander Pavlovsky led the charge headlong into Joseph Haydn’s String Quartet in F Minor, Op. 20 No. 5, considered to be among Haydn's most intense quartets due to its dark, brooding, and occasionally violent mood.

Esteemed British musicologist Sir Donald Tovey opined that it is “the most nearly tragic work Haydn ever wrote; its first movement being of astonishing depth of thought." The Jerusalem Quartet navigated the piece’s nuanced and well-articulated profundities with aplomb.

The work was composed in 1772, during a period in which Haydn was kapellmeister at Eszterháza. Dubbed the "Hungarian Versailles," the palace was beset by a "vexatious, penetrating north wind.” While ensconced in the prince’s court, Haydn suffered from bouts of depression and illness—conditions masterfully expressed in Opus 20 by the members of Jerusalem Quartet: Sergei Bresler (second violinist), Ori Kam (violist), Kyril Zlotnikov (cellist) and Pavlovsky.

Said to have defined the nature of the string quartet, the interplay between instruments in Haydn’s composition — that poet Johann Wolfgang von Goethe likened to "four rational people conversing” — was personified. 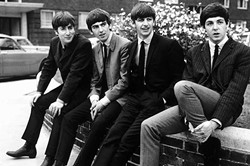 Four years ago, Liverpool, England, the city that begat the Beatles, commissioned renowned choreographer Mark Morris to create a dance that would honor the 50th anniversary of Sgt. Pepper’s Lonely Hearts Club Band, one of the Beatles' most influential albums.

Two years ago, the Mark Morris Dance Group was touring the U.S. with the piece, dubbed Pepperland.

A tribute to the Beatles, the 70-minute dance was a jazzy explosion of color, with innovative modern dance moves and plenty of music, including six Beatles songs. The Washington Post found the dance ravishing.

“Pepperland is an ecstatic and provocative Beatles tribute,’’ dance writer Sarah L. Kaufman declared, “and like no land you’ve been to before.”

Regrettably, that dancing Beatle land did not come to Tucson that year. Because in the midst of all the praise, Pepperland went dark. COVID had descended and the tour shut down. Tucson would have to wait.

Like every other choreographer, Morris spent much of the past year and a half stuck in the studio, but he used the time to experiment with new ways to dance.

Instead of leading some of the nation’s best modern dancers across America’s stages, he put them in dance videos, filmed in lonely New York apartments, with the performers dancing solo. The online videos were a hit, and bit by bit, the troupe ventured carefully back into the world. During the past month, the ever-innovative Morris debuted new works created during the pandemic time. The dancers performed them outdoors in different parts of the Big Apple.