The folks at cannabis-themed Cheba Hut are hosting "Smoke Out Injustice Day" at their new Tucson location, 446 N. Campbell Ave.

Given that far too many people remain behind bars thanks to cannabis offenses, this seems like a tasty way to help in the effort to end incarceration for smoking weed. 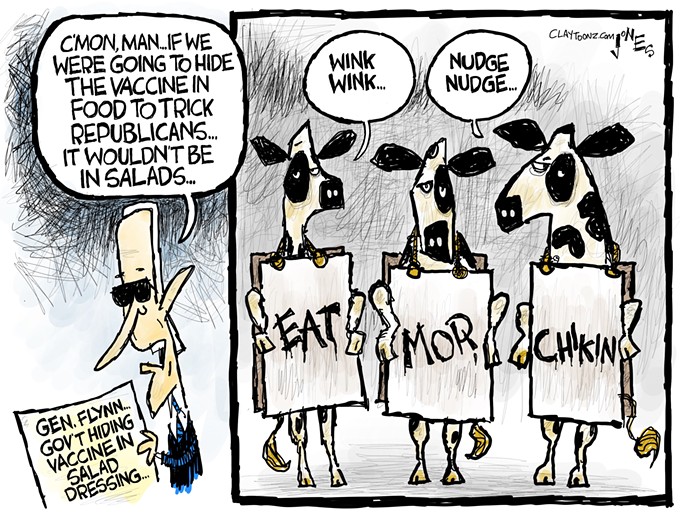 Thanks to some amateur bakers from Arizona, we can get free donuts on Friday in honor of National Donut Day.

Braxton B., 12, from Queen Creek, one the kids’ category with his Italian-inspired Kinder Joy Donut. It's filled with buttercream, topped with chocolate hazelnut spread and covered with crushed wafer cookies.

Heather Hirsch from Phoenix won the grown-up category with a Greek-inspired Baklava Donut made with cinnamon, dipped in a honey glaze and topped with chopped pistachios.

Mesa resident Kristine Pearce, who works at the Bashas’ supermarket at Baseline and Crismon Roads, won the member/employee category. Her Peruvian-inspired Delirium Donut is filled with Bavarian cream, topped with chocolate icing, sprinkled with crushed pecans and drizzled with caramel.

The winning donuts will be available for purchase starting Friday. Bashas' will give customers six free donuts when they purchase a dozen.

Bashas’ will donate 10% of its donut sales on June 4 to the Salvation Army, which established National Donut Day in June 1938 to honor volunteers who served the sweet treats to soldiers on the frontlines.

In addition to being named Bashas’ Official Donut Ambassadors for 2021, Braxton, Heather and Kristine will each receive one dozen donuts every month for a year, and $500 worth of prizes including a Bashas’ grocery gift card and baking/cooking gadgets.

Zio Peppe will open its dining room and patio on Tuesday, allowing customers to dine on the premises.

While guests have been able to enjoy Zio Peppe, 6502 E. Tanque Verde Road, for takeout and delivery since it reopened earlier this month, “We really want people to come see the space; we couldn't be happier with how it came together,” said Chef/Owner Devon Sanner in a news release.

“We’re thrilled to be able to invite our guests to join us and experience Zio Peppe in person,” he said. “We’ll continue offering takeout and delivery for guests who would like to enjoy our food at home, but we’re elated in anticipation of a well-seated, convivial dining room.”

"The centerpiece of the Zio Peppe space is a unique gas and wood-fired oven with a rotating stone hearth, which tells me that pizza is a central part of their story. And several of the Neapolitan-style pizzas symbolize the Sonoran-Italian connection," wrote Tucson Weekly Chow writer Matt Russell.

Zio Peppe’s menu showcases a confluence of Italian-American and Sonoran cuisines, reflecting the chefs’ love of comfort classics as well as the regional flavors and ingredients of their native Tucson. Characteristic of this Italian and Sonoran synergy is the Fettuccine Alfredorado, which Chef/Owner Mat Cable cites as being among their most popular dishes.

“We’ve got pizzas that are unique; you could only get this in Tucson,” Cable said, referring to the Prickly Pickle, with its pepperoncini-brined cholla buds, nopalitos, and red onion escabeche.

On Tuesday, eegee's will open a new prototype location in South Tucson that will feature an “eegee-only” drive-thru window. The new location is at the Landing shopping area, 4765 S. Landing Center Dr., near Interstate 19 and Irvington Road.

The new 2,200 square-foot space will feature a full drive-thru with a walk-up order window and garage doors to allow for an indoor/outdoor experience.

For Tuesday's grand opening from 4 to 6 p.m., eegee’s is inviting the public to enjoy food and drinks (including new items) and stock up on the greatly coveted eegee's swag.

“We’re so excited to bring our menu to the residents of South Tucson,” says CEO Ron Petty. “This area has seen tremendous growth and we felt it was the perfect place to debut our new prototype. And while our look and feel has evolved over time, our classic menu items and the service we provide remains the same.”

The Rio Nuevo board advanced three projects in an effort to recovery after the COVID pandemic:

Now that COVID-19 cases are trending downward across Pima County —and the governor has removed business occupancy restrictions—Hotel Congress is looking to celebrate St. Patrick's Day.

"We are not idiots. A traditional green beer and Irish whiskey-drenched bacchanalia is not an appropriate option, but maybe—just maybe— we do a little more than a "tip o' the hat" to St. Patrick's Day," according to a recent Hotel Congress release.

The hotel's Cup Cafe will begin serving traditional Irish fares like corned beef and cabbage, Guinness beef stew and Irish cream cupcakes until 3 p.m. Wednesday. Then the party kicks into full swing at 5 p.m. on the hotel's plaza as the Plaza Eats food truck serves up all your Irish food favorites, Irish coffee, Irish whiskey flights, along with specials on Guinness pints and Jameson shots.

DJ PC Party will be holding down the ones-and-twos, complimentary party favors will be handed out to partygoers and the evening is set to crescendo with the Great Guinness Toast at 10 p.m.