Views from Tucson, Issue 2 Captures the City with Lo-fi Nostalgia

Smartphones may take sharp pictures, but there's nothing quite like analog film. Kikie Wilkins, local film photographer, uses his film cameras loaded with new and expired film to capture ordinary and candid moments in Tucson. His new zine, Views from Tucson, Issue 2 is out now.

The photos in Issue 2 are all taken using his Kodak Brownie Hawkeye box camera. He described the camera as being meant for the amateur photographer "who was more interested in taking pictures of the family vacation or a child's birthday party."

"I decided to use the Hawkeye to take these photographs as a personal challenge to see what results could obtain from such a basic camera."

The combination of Wilkins' use of the Hawkeye and old film creates a sun bleached, dreamy image. The colors drift into dusty pastels and feel like they're from a different time. He photographs familiar landmarks, old cars, images of childhood.

This issue features views of the flooded Rillito river at the Camino de la Tierra crossing, the downtown jazz fiesta, some cars of Tucson and neighborhood views in a self-published book. The 44-page issue is printed in high quality color and black & white on gloss paper.

All Bets Are On: On the WCWS, Arizona Basketball and Devonaire Doutrive's Departure

An Evening with Two-Door Hatchback 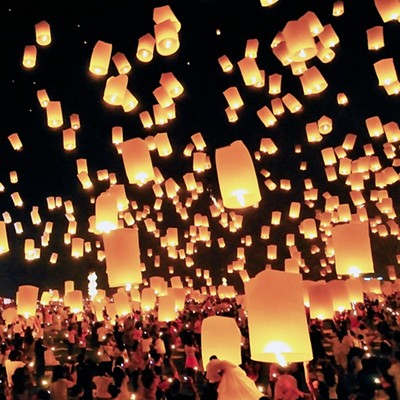