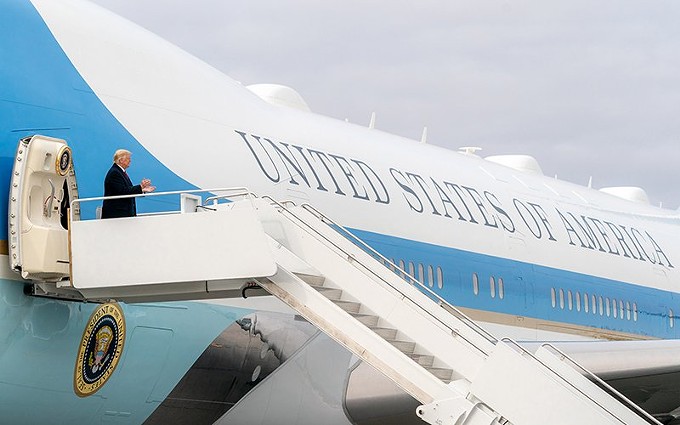 Shealah Craighead, The White House
President Donald Trump gets off Air Force One in New Hampshire on Sunday, one of a score of campaign trips he has made on the presidential plane within the last week alone. Government watchdog groups say it is extremely difficult to find out how much of the cost of such trips are paid for the campaign and how much of the bill is footed by taxpayers.


WASHINGTON – When Air Force One touches down in Arizona for President Donald Trump’s campaign visits to Bullhead City and Goodyear on Wednesday, it will be at least the 20th campaign stop for the jet in the past eight days.

Who pays for those trips? You do. Maybe. Or maybe the Trump campaign does. Or a little bit of both. Government watchdog groups say they have not been able to get a full accounting of the expenses related to the president’s use of Air Force One, despite years of trying.

“This is just a matter of good government transparency,” said Demian Brady, director of research for the National Taxpayers Union Foundation. “We should be able to have access to how our taxpayer dollars are being spent.”

The NTUF did learn Tuesday that the latest cost of operating the president’s plane has risen to $176,393 per hour, up from $142,380 per flight hour in 2017, the last time the Air Force reported the amount. An Air Force spokesperson confirmed the higher amount in an email Tuesday.

The NTUF is not the only group clamoring to get information on the costs of the president’s trips. The conservative group Judicial Watch took the administration of then-President Barack Obama to court to try to learn the costs associated with his travel, and it has continued that practice – with limited success – with the Trump administration.

“I have sent requests to the Air Force seeking how much the RNC (Republican National Committee) reimburses for campaign travel,” said Justin McCarthy, a Judicial Watch research associate, in an email this week. “Unfortunately, I have not been successful in obtaining any information.”

Taxpayers are on the hook for fuel, hotels, food and the costs of Secret Service protection when the president travels on official business. But campaigns are supposed to reimburse the government at a rate comparable to a standard charter flight when a “government conveyance” is used to travel to a campaign event.

The trick is determining what’s official and what’s not. Since some of President Trump’s travel combines official and campaign visits, it becomes difficult to determine what portion should be covered by the government and what portion needs to be reimbursed by the president’s political party. So far, not much, according to what watchdogs have been able to find out.

“Since 2017, the president’s campaign has reimbursed approximately $1.4 million to the Department of Treasury for air travel,” Brady said. “I would assume that the bulk of the reimbursable portion is related to the use of Air Force One non-presidential official business.”

But Air Force One is just part of the costs of any presidential travel.

Besides the plane, whose costs primarily cover fuel, there are also security costs for the Secret Service to ensure the safety of the president before and during his visit. Those costs can include rental cars, housing, and food that a security team would incur in the days leading up to the president’s arrival.

When Sen. John Barrasso, R-Wyo., asked the Government Accountability Office to report on costs related to Obama’s trips to Illinois and Florida from Feb. 15-18, 2013, the GAO put the cost of Defense Department and Department of Homeland Security support services at $3.6 million. Excluded from that amount were certain classified Pentagon costs, and the salaries and benefits of civilian and military personnel traveling with the president.

“The GAO report is significant because it represents the first time since 2000 that the government watchdog agency has reported on presidential travel costs,” the NTUF said on its website.

Judicial Watch reported in September 2018 that it had counted more than $17.2 million in Secret Service expenses associated with Trump’s travel to that point, information it said it got through a series of lawsuit and Freedom of Information Act requests.

“Usually, this information will only become available if the Government Accountability Office looks into it, and that will be much later after the fact to get a full accounting,” Brady said.

And it’s not just the president whose travel expenses are hard to uncover.

Delaney Marsco, legal counsel for the Campaign Legal Center, said her organization has made several attempts to learn to costs associated with air travel for senior members of Trump’s Cabinet with mixed results.

“One of the issues with these records is that they’re not made available as a matter of course, despite repeated representations from GSA that they would be,” Marsco said.

And Brady said it does not appear to be getting any easier to get the information.

“In the past, their (Air Force) public affairs office has responded via email and given that information,” on costs associated with Air Force One, Brady said. “But over the last couple of years, they have not been so quick to get back to me.”

Brady said the issue should not be about partisan politics.