The terrorists only completed two of those objectives. Heroically, and at the cost of their lives and all those aboard, several of the passengers of Flight 93 foiled the last part of that wicked plan over a field of Stony Creek Township, where a memorial to their bravery now stands.

Trump incited a mob of 'patriotic' Americans into attacking our Capitol, demonstrating that American democracy is not sacred, safe, nor stable. Demonstrating to the world that even our democracy — the oldest in the world — is, in fact, undeniably fragile and vulnerable.

Trump did what the 9/11 terrorists could not. Trump drove a stake into the heart of Americans' own confidence in the stability and durability of our democracy.

Trump's uniquely evil twist is that he used American patriots to carry out that attack.

And Trump also used the exact same method as the plotters and planners of Al Qaeda: lies.

Al Qaeda's lies were, at least, founded in some actual facts. America did, in fact, meddle in middle eastern wars for years, arming the combatants and intensifying the carnage. America did, in fact, station our troops on the soil of the "Holy Land" of Saudi Arabia for a time. Al Qaeda used these facts to fashion a web of lies so convincing, enraging, and monstrous to devout Muslims and Arab patriots that they gave their own lives in attempt to wound America.

On 1/6 Trump used absurd and patently 'alternative facts' to fashion a web of lies so enraging and monstrous to devout Christians and American 'patriots' that one of them, Ashli Babbitt, lost her life in a reckless bid to "save" America by "stopping the steal". It's a tragedy, and bitterly ironic, that all that she and her compatriots accomplished was to complete the mission of the 9/11 hijackers, who were stopped by the sacrifices of patriots.

To make the actions of Trump's mob on 1/6 anything other than an act of terrorism by the President, you must believe that he and they were pursing a just cause to save American democracy. If they were not righteously preserving the will of America's voters, these 'patriots' were merely the dupes of a terrorist plot by the President of the United States against our democracy.

But Trump's claim that the election was stolen is a farrago of patent lies, absurdities, and conspiracy theories. All of it can be easily and thoroughly discredited given even the most basic understanding of elections procedures, law, and politics. But that will be done thoroughly and repeatedly by others elsewhere. Let's just look briefly at where the lies become so absurd and transparent that they become a black hole of bullshit: Georgia.

Trump's claim of a stolen election in Georgia requires that the Governor and Secretary of State of Georgia, both Trump-supporting Republicans, MUST be in on the "steal". You have to believe that Governor Brian Kemp — whom Democrats despise for immorally striking black Democrats from the election rolls just prior to his contest against Stacy Abrams in 2018 — and Republican Secretary Brad Raffensperger, are part of a conspiracy to hand the Presidency illegally to Democrat Joe Biden. You have to believe that these partisan Republicans have maintained this fiction through multiple audits and hand-counts of the actual physical ballots, and multiple lawsuits, to which the Republican Attorney General Chris Carr signed his name, stating that there was no fraud or misconduct in this election. That means that dozens, if not hundreds, of state employees and Republican Party officials overseeing the election also have to be in on the plot.

I suppose all of that is POSSIBLE, but, my Republican countrymen, ask yourself, which is a vastly more likelyexplanation: that all these Republicans would plot against their own party and country, or that Trump is simply lying to preserve his power? You can believe that these Republicans are honest elected officials standing up for the rule of law, truth and democracy against Trump's lies, or you can believe Trump absurd lies. You can't believe both.

Of course, most of you do know Trump is lying, as he has done continuously, provably, and outrageously throughout his presidency.

I know that it is gratifying to at least pretend to believe Trump's lies when doing so "owns" the Dems and the media. But now, it is YOU who are being owned.

Owned into attacking your own democracy. Owned into betraying the institutions that have made America great. Owned into becoming domestic terrorists who can accomplish what Al Qaeda could not.

My countrymen, you have a choice - one you can no longer postpone or avoid - between American democracy and Trump's lies. And you MUST chose. Know that on your choice the fate of the American democratic experiment depends.

I beg you: don't let Trump's terrorist attack on our democracy destroy the target Al Qaeda could not. Don't make Trump America's Putin.

Trump must be removed from office and banned from public life by impeachment, and prosecuted for any and all crimes he can be proven to have committed in open court. Anything short of this legitimates a terrorist attack on America by its own President, and heralds the end of the American Republic.

UA Returns to Class; Campus will be COVID-19 Vaccination Hub 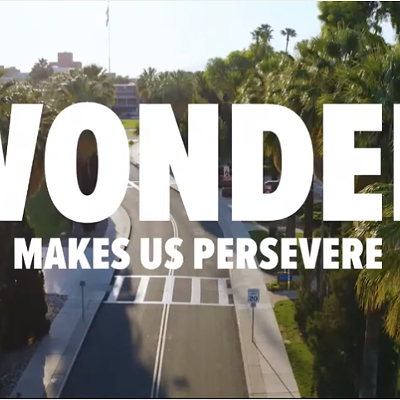