In a press release sent out today by Tucson Unified School District's media staffer Cara Rene, TUSD Superintendent John Pedicone asks for civility when it comes to Mexican American studies. Tucson Freedom Summer must have been tough on the beleaguered school district, but I'm not sure if the healing Pedicone calls for can easily begin with a press release.

Attorney and TUSD parent Jana Happel spoke at the last school board meeting, and perfectly explained what could have been done to prevent the district from the national embarrassment it continues to face in how it went about "moving forward" by dismantling the classes, banning books and not renewing the MAS director's contract—when the district's deseg plan gave the district an out all along.

Happel's comments at the board meeting (see video above) is a shoulda, so what happens now? Being more transparent would be a start. The development of a multicultural curriculum was supposed to include public input. That hasn't happened yet. Perhaps it's an acknowledgement that like MAS supporters, TUSD is playing a waiting game, too — waiting for the special master to unveil a new desegregation plan and waiting for a U.S. District Court judge to help determine if the anti-Mexican American studies law is unconstitutional.

Until a decision on any front comes forward, I suspect TUSD will have to face more actions in front of the admin building and inside during board meetings. If healing is something that the district cares about, starting by asking Chicanos and pro-MAS supporters to be "civil" is a huge fail.

Here's a slide show of the latest action that took place Tuesday, July 31, outside the Tucson Convention Center when TUSD staff and educators gathered inside for the Back to School Assembly. TUSD staffers waiting in line as they checked in had to go in front of the pro-MAS action outside TCC. A few wore scowls on their faces, while other joined the chants, left the line to hug students and fellow educators, and flashed smiles at the students dressed in zoot suit-era costumes. 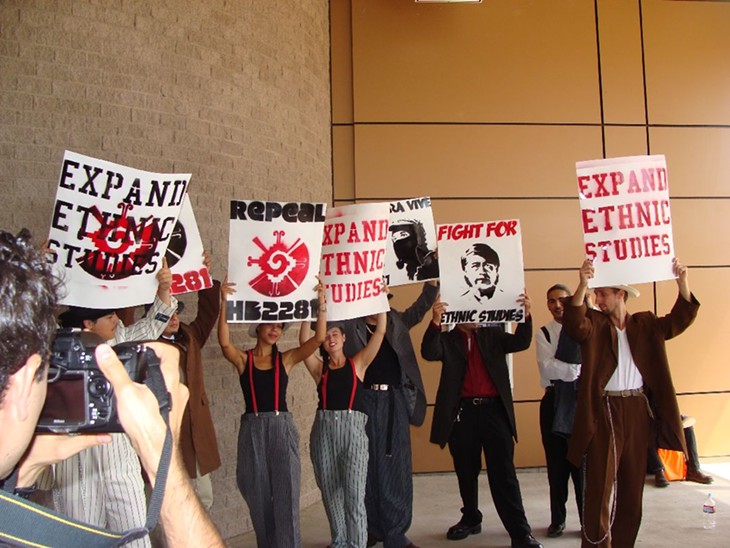 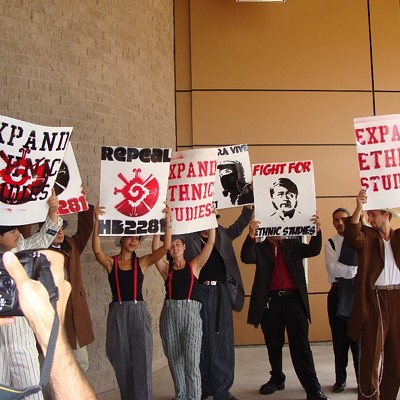 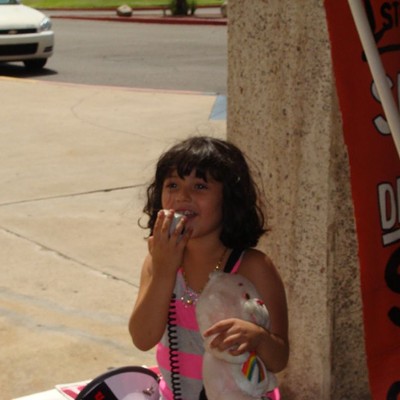 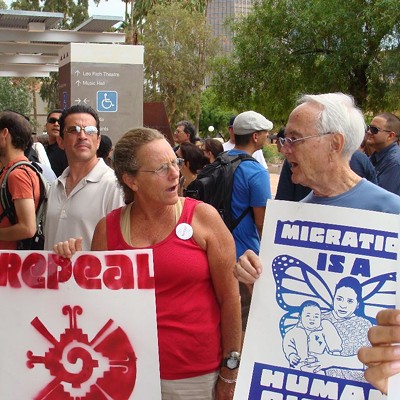 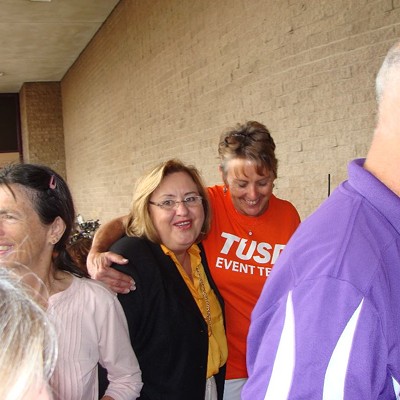 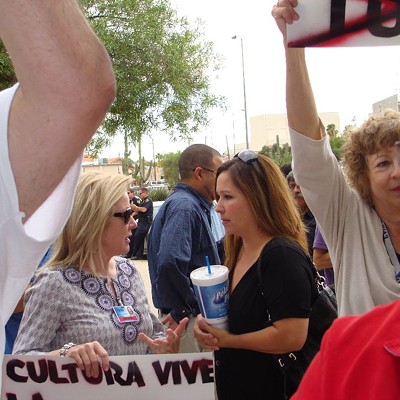 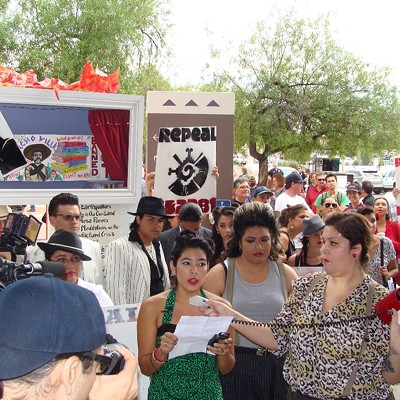 Since the TUSD Governing Board voted in January to comply with the State of Arizona requirement to discontinue the classes or lose $15 million in funding, there has been a troubling escalation of harsh words and actions against and in support of the decision.

Such extreme actions have included death threats to TUSD students, community members and board members, a smoke bomb incident at a public meeting, and visits to the homes of board members with the intent to intimidate.

“Such extreme acts of aggression cannot be tolerated,” says TUSD Superintendent Dr. John Pedicone. “Steps must be taken in order for the community to begin healing. To move toward that goal, we must first establish temperance in the tone of conversation and certainly in the actions taking place since this decision was made.”

District leadership joins with community members who have asked for civility and an end to the extreme tactics and threats being used by some as a course for change.

Sheriff Joe to Rolling Stone: "Controversy—Well, It Hasn't Hurt Me in 50 Years"