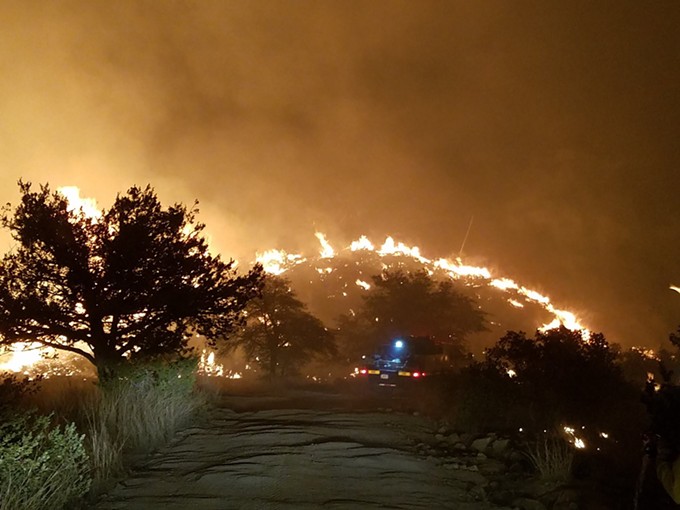 Courtesy Burro FIre Info Facebook Page
It's the end of the world as we know it...

We’ll hit 100 degrees here in the Phoenix area any day now, though Tucson already beat us to it.

And as we get a bit grouchy about the rising temperatures (while simultaneously happy about less traffic and fewer tourists clogging our favorite spots), our state enters its climate calamity season.

Wildfire season started early and could be worse than normal. As of Wednesday, three active wildfires are burning throughout the state, the Republic’s map of the disasters shows. Even if we get much-needed rain — unlike 2020 — it’s not all good news: Rain can lead to devastating floods and mudslides in areas burned by fire.

Our decades-long drought and overallocation of water from the Colorado River system is also quickly moving to the foreground for farmers who can’t grow what they’ve been growing for decades. The best the West can do at this point is stave off the inevitable.

The second-largest man-made reservoir in the US has dropped to unthinkable lows amid the West's climate change-driven megadrought. A pair of before and after photos at Lake Powell, located near the Utah-Arizona border, illustrates this transformation. https://t.co/C8JaFaG4SL pic.twitter.com/b7RL7nr3BM

Meanwhile, Arizona’s foresight with groundwater management in some parts of the state decades ago isn’t helping the communities where wells are running dry these days. Just ask residents of Rio Verde Foothills or Pine-Strawberry or Willcox.

We read stories from all around the state every day to compile this newsletter, and there’s a daily stream of links about all of these problems. There’s a clear theme – the threats of climate change are here. But there’s not a whole lot of action.

In recent years, Republican elected officials have acknowledged the threats of wildfires and water supply by putting money toward the problem. Last year, it was $100 million for wildfire management and suppression. This year, it’s a potential $1 billion water package over three years, though that prospect is looking increasingly shaky as lawmakers dawdle.

The night after a major Arizona wildfire sparked, something unusual happened. And experts say climate change is to blame. https://t.co/6yexSZ4SHi.

But still, as reporter Emily Delaney wrote in the Arizona Mirror, the state hasn’t addressed climate change this year. We’d expand that considerably: The state hasn’t addressed climate change at all, not that we can recall. Not as climate heavyweights convene in Arizona to talk about the problem. Not as protesters gather at the Capitol to push for federal and state legislation.


And when cities try to enact their own environmental policies, the state slaps back — or the cities don’t even enforce the laws they put on the books.

At best, Arizona’s leaders occasionally get behind big pushes for money to address the consequences of climate change. They almost never address, or even acknowledge, the root causes.


Take this year’s water proposal, for example: It’s a splashy amount of money that looks toward a future water supply, but the details are hazy. It’s unclear if a proposed water desalination plant that accounts for the bulk of the funding is even feasible. And a major policy provision of that package, creating a statewide water board, isn’t going to solve our problems.

And many of our state leaders would rather squirrel that excess $5.3 billion away in a “skinny budget” than try to address the problems wrought by rising temperatures and decades of inaction.

Our newsroom budget is skinny, too, and we probably already used this joke before, so you know we mean it. Click below to get our news in your inbox every day or become a paying subscriber.

Something ain’t right at Phoenix PD: The protester depicted on Phoenix Police Department’s “good night left nut” challenge coin was interviewed by the U.S. Department of Justice in its ongoing civil rights investigation into Phoenix Police practices, ABC15’s Dave Biscobing reports. Meanwhile, the Phoenix New Times rounds up three new state investigations into misconduct by Phoenix Police Department officers, including one cop who got drunk in Las Vegas and warned three bouncers he could take them all, then claimed he had “jurisdiction over the whole West Coast.”

Speaking of crime: Crime victims and their supporters rallied at the state Capitol yesterday to urge lawmakers to pass House Bill 2594, which would establish a new fund for “trauma recovery centers,” University of Arizona Don Bolles fellow Gloria Gomez reports in the Arizona Mirror. In other states, the centers provide mental health care and legal assistance to victims of crime.

Something ain't right with Paul: U.S. Rep. and Arizona embarrassment Paul Gosar tweeted a meme that was celebrated by white supremacists and neo-nazis on Holocaust rememberance day. The tweet claimed the U.S. could easily deport “6 million (people) each year” which, totally coincidentally we’re sure, is the number of Jews murdered in the Holocaust. Gosar deleted it after the Arizona Mirror’s Jerod MacDonald-Evoy asked about it.

“‘A 9mm round is $0.49,’ one user on Gab wrote, while one Twitter user wrote ‘#DayOfThePlane,’ a reference to the white supremacist book the Turner Diaries in which white supremacist rebels take over California and engage in mass lynchings. The book was an inspiration for Oklahoma City bomber Timothy McVeigh,” MacDonald-Evoy writes.

Too cold, too hot, just right: Lawmakers rolled back some of the strict restrictions they put on prescription opioids back in 2018 after people who suffer chronic pain became unable to get pain meds that they need, the Republic’s Christina van Waasbergen writes.

We should talk about Brno: The Republic’s conservative columnist Robert Robb sided mostly with Secretary of State Katie Hobbs against Attorney General Mark Brnovich in their ongoing legal dustup over the elections procedures manual, also known as the “elections bible.” Robb argued that while Hobbs arguably tried to sneak in a provision or two that didn’t belong, Brnovich’s refusal to sign off on it despite her capitulation on several provisions, and his new demands for additional provisions, goes beyond the scope of his role in reviewing the document.

Who let Ron Watkins on TV?: Last night’s Arizona Citizens Clean Elections debate in the GOP primary for Congressional District 2 was, as expected, a doozy, as Ron Watkins, the probable founder of the QAnon conspiracy, took the stage and claimed, among other bizarre claims, that Russia invaded Ukraine because Joe Biden shutdown the Keystone Pipeline. (He later acknowledged that wasn’t true.) The two other Republican candidates who showed up, state Rep. Walt Blackman and Andy Yates, looked pretty electable by comparison.

Way to quit!: Republic columnist Elvia Diaz offered props to former Maricopa County Attorney candidate and Governor’s Office lawyer Anni Foster for her graceful exit from the race after Rachel Mitchell won the appointment, saying that “we’ve reached a point of vitriol, egotism and self-serving in today’s politics that anything sensible is commendable.”

Seek and you shall find: The Flinn Foundation has put increased emphasis on finding Latino students to apply for its prestigious and competitive merit-based scholarship worth $130,000, and it’s working. Of this year’s group of 23 students who won the scholarships, nine are Latino, the Republic’s Daniel Gonzalez writes.

Candidates are dropping like flies: Two Republicans running in the competitive Legislative District 2 House race got booted from the ballot yesterday, the Yellow Sheet Report reports. Reynold Ramsey and Neil Desanti both came up short during petition challenges, leaving just three Republicans to vie for the two spots. Rep. Judy Schweibert is the only Democrat running for the House in LD2, despite it being a competitive district. Meanwhile, Surprise City Councilman Roland Winters was kicked off the ballot after coming up 12 signatures short, the Republic’s Taylor Seely reports. He has served on the council since 2014.

Hit the road: Democratic U.S. Sen. Mark Kelly returned from his first trip abroad, a nine-day excursion through Europe and Asia and told the Republic’s Yvonne Wingett Sanchez that the tour renewed his vigor to ensure Russia loses its war in Ukraine.

Were they good seats though?: A former longtime Phoenix Suns employee scammed roughly a half-million dollars from the team by stealing around 3,000 tickets and selling them, the Phoenix New Times reports. He pleaded guilty and may get probation or a few years in prison.

No food to eat: Additional pandemic-era federal food stamp benefits are running out for about 350,000 Arizonans, who will have to survive on much less help, AZFamily reports. Meanwhile, food banks are starting to feel the squeeze.

“[The letter] says my food stamps were going to be cut from $230 to $20 a month,” Robert Parker, a retired heavy equipment operator from Payson, told the station. “Which, with today’s inflation, leaves me kind of in a pickle.”

Gov. Doug Ducey signed a bill that will collect data on instances of hate crimes based on antisemitism as a way to track a rise in such crimes.

The strike-everything amendment to House Bill 2675, sponsored by Republican Rep. Leo Biasiucci, also includes a definition of antisemitism, codifying the definition used by the International Holocaust Remembrance Alliance and the U.S. Department of State. This definition helps law enforcement agencies determine if a crime stemmed from antisemitism.

Ducey pointed to reports from the Anti-Defamation League that showed a record number of antisemitic incidents nationwide, including in Arizona.

Republic columnist Laurie Roberts contrasted Ducey’s signing the bill with his financial support for Arizona Sen. Wendy Rogers, whose antisemitism played a role in her eventual censure by her colleagues.

“Ducey, meanwhile, waxes on about the evils of antisemitism, unwilling to address the antisemitic elephant in the room,” Roberts writes.

Good on Republic columnist Bill Goodykoontz for eliciting this adorable response from actor Alex Winter aka "Ted" Theodore Logan from “Bill and Ted’s Excellent Adventure” on the closing of the Tempe Circle K where strange things were afoot in the epic time-travel movie.

“All we are…” the actor tweeted to Goodykoontz, a nod to this: 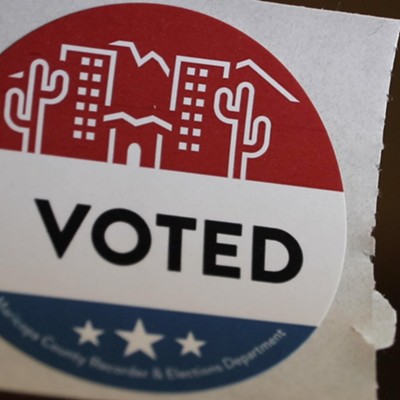