WASHINGTON – Despite gains in some areas, Arizona continued to rank among the worst states in the nation for education, according to the latest version of a national report that measures children’s well-being across several areas.

The 2021 Kids Count report said Arizona was 47th overall in education, down one spot from 46th a year earlier, evidence that “we’re not doing a very good job in Arizona,” experts said.

David Lujan, president and CEO of Children’s Action Alliance, said the low ranking “stems from the lack of investments we’ve seen in education, not only K-12 education but early childhood education, going back for more than 20 years now.”

“We’re seeing the ramifications of that in things like large class sizes, the lack of full-day kindergarten in every school district, and teacher shortages,” Lujan said. “Those things matter when it comes to being able to provide a quality education for students.”

Overall, Arizona improved slightly, going from 42nd place in last year’s report to 40th in the latest report. But the state did not crack the top half of states in any category. Arizona did best in health, where it finished 28th among states, followed by 35th for economic well-being and 46th in family and community.

And those numbers are likely to get worse in next year’s report, which will include data from the pandemic year of 2020, which did not make it into this report, experts said.

“Providing access to quality health care, child care, education and mental health services must be the focus as we come out of the coronavirus pandemic,” Lujan said.

Among the troubling numbers in the education category, the report showed that 69% of fourth-graders in Arizona were not proficient in reading in 2019, the last year for which numbers were available. That was a significant improvement from the 75% recorded as not proficient 10 years earlier and was closing in on the national average – but was still higher than the rate of 66% in 2019.

Education was the only category where Arizona’s ranking got worse in this year’s report from last year’s. The Arizona Department of Education declined to comment on the data. But advocates said shortfalls now will have long-term effects.

“The research shows that if students are not reading at grade level by the fourth grade, that they are then going to be struggling to learn for the rest of their academic lives,” Lujan said.

The difference between four-year high school graduation rates in Arizona and the U.S. is even more stark. The report said 22% of Arizona high schoolers do not finish in four years, compared to 14% nationally, a trend Lujan tied back to these issues in early childhood and K-12 education.

“In the states that fare well in education, they focus on the entire scope of the education cycle from early childhood education through K-12 and post-secondary,” he said. “They make sure that from the time a child is 3 or 4 years old until the time they graduate from a college that they get a really good education.”

Lujan and others said that now is the time to increase funding for schools, as the state sits on a huge budget surplus. But the Legislature is currently debating a fiscal 2022 budget that would give much of the surplus back to taxpayers in the form of a flat income tax rate that would cut taxes across the board.

“We actually have an opportunity this year to make investments in our education system that will greatly improve the resources for education in our state,” said Lujan, who complained that lawmakers were instead talking “about giving much of that revenue surplus away in the form of tax cuts to the wealthy.”

That was echoed by Sara Wyffels, 2021 Arizona Teacher of the Year.

“By increasing our investment in public education, this could potentially reduce class size, which then gives students and teachers more opportunity to connect, thus improving the quality and the impact of education on each student,” she said.

“We need to make some more effort to come together as a community in a truly bipartisan non-political setting to talk about what is best for all of our children, and really take some time to listen to what our teachers have to say,” Wyffels said.

“We’re all here because our children deserve more than what they’re getting at the state level,” she said. 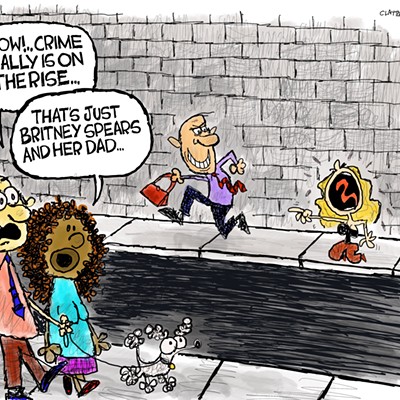 Claytoonz: Oops, I Drew It Again

What is ‘brain fog,’ and why are COVID-19 long-haulers more susceptible?