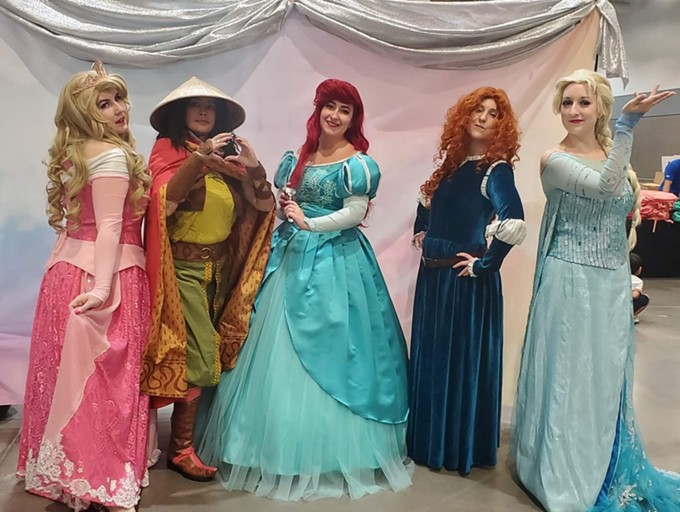 When Jeka Bosworth goes out, she takes on a new name: Isabela, just like the character from Disney’s “Encanto.” She can identify with her.

“I know what it’s like being the oldest daughter, the child who needs to be the perfect child,” Bosworth said. “In the movie, Isabela breaks out. She lets go of the perfectionist and it’s nice having that being translated that it’s OK to do that, and also, it doesn’t hurt to have someone who looks like me: brown skin, dark hair.”

Sometimes, however, Bosworth likes to be Jasmine from “Aladdin” or another Disney princess, Elena of Avalor.

“They’re both dark like me with long dark hair, and they love their families,” she added.

Bosworth proves that Disney princesses are real, or at least sort of real. At the nonprofit Timeless Enchantments Arizona, a number of Disney can princesses step out into the community to appear at business openings or fundraisers. It’s a way to serve the community, which is really their purpose.

“We help out local community efforts for fundraisers, awareness, community outreach that brings everyone together,” said leadership member Nikki Padgen, whose alter ego is Elsa from “Frozen.”

“We try to bring as much fairytale magic to our communities so all kids, like underprivileged kids, can experience that,” Bosworth said.

“They can’t travel out of town or state, so we bring the magic to them.”

“We can usually hear them down the hallway,” Bosworth added. “We can hear them from a pretty far distance screaming at us, and then sometimes we have to brace ourselves for a tiny person running into our legs and hugging (us).”

They travel throughout the state, not just Tucson.

“One of our events that we do is Tim Tebow’s Night to Shine,” Padgen said.

Night to Shine is a prom night at hundreds of churches in 39 countries centered on “God’s love, for people with special needs.”

“I relate to Elsa in her journey of self-acceptance and self-discovery,” Padgen said. “I really connected to Elsa on that level.”

There is no charge for the appearances, but there are guidelines.

“Mainly we do outreach programs,” Padgen said. “Say, it’s Lugo Charity’s Bike in a Box event. Basically, they raise their own funds. We’re there to help them with their event, so we don’t do (private) parties. We don’t do funerals. We don’t do paid gigs.”

Yes, they have been requested for funerals; it’s just not something they do.

“We are there strictly for charity events, fundraising events, anything to help our local community,” Bosworth said.