With her café and catering company, chef Wendy Gauthier has fed Tucson for more than 20 years 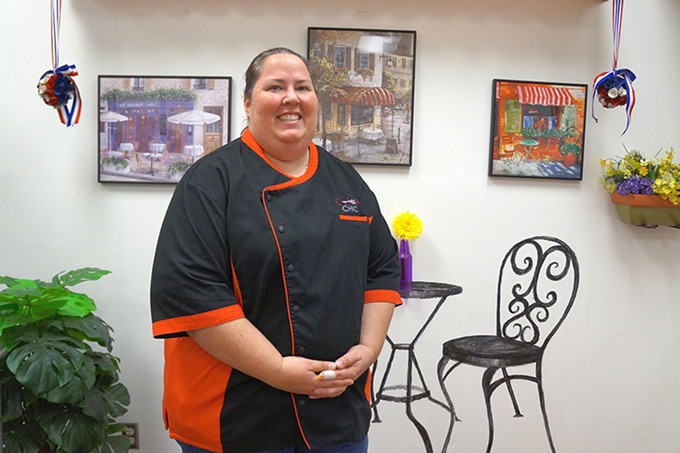 It seems that every year a guy takes the crown in the annual Tucson Iron Chef competition. Mind you, every year, a very talented guy wins, but still, wouldn't it be cool to see a woman step up to the kitchen throne and peer down at the wake of dudes that just couldn't make the final cut? It's not like local lady chefs don't try though. In fact, every year, one in particular throws her knives into the ring and always impresses during the first lap of the race, but for some odd reason just doesn't make it to the finish line.

"I lost getting to the Iron Chef finals by .02 votes. Can you believe that?"

Chef Wendy Gauthier will get there someday, but, in the meantime, she has her own empire to preside over. Proprietor of Chef Chic, part café, part catering company, Wendy has been a Tucson culinary presence since the late '90s. Originally from Alexandria, Virginia, Wendy's road to the Old Pueblo was chock full of happenstance, horrible jobs and, most importantly, a disdain for music school.

"I was actually admitted to James Madison University, back in Virginia, for music," Wendy recalls. "I played the xylophone, both classical and jazz. But it just wasn't for me. Then randomly one day I get a brochure from the Culinary Institute at Hyde Park in New York and thought, hmm, that could be cool."

Wendys's dad, an engineer, had a knack for baking, so on weekends they would spend time together in the kitchen developing fun and inventive dishes. Even though she grew up cooking, possessing a natural talent and love for it, her parents were far from supportive on her decision to go to culinary school.

"My parents wanted me to finish college and then go to the culinary academy," Wendy says. "But I just couldn't do it. I am not a desk person."

Before graduating, Wendy did what all good chefs needed to do, get a rotten first job. She found herself working for a place called Antone's, which had restaurants in various terminals at the Ronald Reagan airport in Washington. It was here that an 18-year-old Wendy cut more than her teeth on her road to becoming a chef. Shucking oysters all day will give you the proper focus, cuts and callouses to prove your worth as a professional cook. During her school tenure, Wendy was required to intern, so she picked a location far away from the blizzards and humidity and chose Tucson's Canyon Ranch.

After that, Wendy moved around a bit, finding herself in Milwaukee and St. Louis before movimg back to Tucson, and back in the Canyon Ranch kitchen.

After Canyon Ranch she ascended the ranks at Flying V in Lowe's Ventana, but the politics surrounding resort hotels began to weigh on her. An article in USA Today about personal cheffing piqued her interest so she went to Phoenix for a weekend seminar but that came to a halt seeing as her first day was on Sept. 11, 2001.

Once she got certified, Wendy went out on her own, cooking delicious healthy meals for people in home and also doing catering. But the initial name of her business needed some work.

"Ugh," groans Wendy. "It was called Especially For You. It lasted for maybe two years, but it just didn't describe what I did. In school my email address was chefchic77, because chefchick was taken. I thought that was brilliant. So, it's been Chef Chic ever since."

If you want to visit her quaint French inspired café, seeing as Wendy is half-French from her dad's side, you'll have to get through security first as it is located in the media building on South Park and Irvington, home to several news publications. It might be worth the wait and clearance, because her food is as comforting and inviting as she is. Otherwise you can enjoy her cuisine at various events about town and upcoming pop up dinners at breweries.

"I'd say outside of Julia Child and Martin Yan being influences on me, my biggest would have to be my coach in high school," Wendy says. "I did shotput and discus and he was the first I went to saying I didn't want to go to music school. He was hard on me, but he cared. It was because of him that made me the kind of chef I am today. And I am so in love with the current Tucson culinary scene! It's amazing to see long lines at funky ethnic restaurants. I'm not in the market for my own restaurant right now, but...you never know."