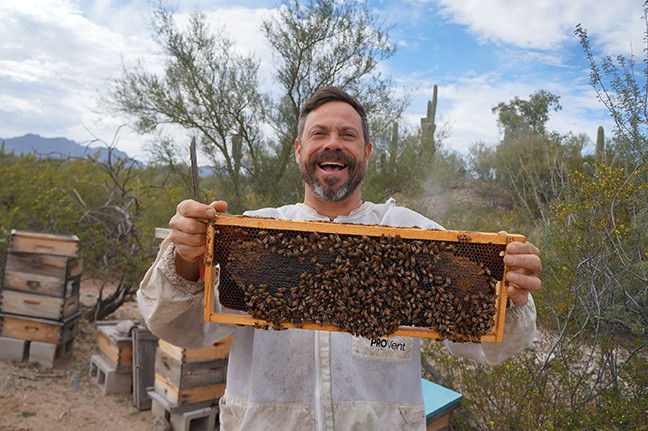 Mark Whittaker
Noel Patterson got a beehive from a friend and “decided to take this weird gift to the next level.”

The decades-old pick-up truck was rattling like heavy cans as we traversed the bumpy terrain of the Tucson Hills. As the late afternoon sun beamed through the dust speckled windshield, driver Noel Patterson told me I was in for a treat.

"I have several hives hidden all over Tucson," he says with an impish grin, "but this one we're going to is going to blow your mind."

Somewhere among the brush and cacti, Patterson slowed the vehicle down. We got out and he immediately zipped me up in a beekeeper's suit. After igniting a smoker, Patterson moved towards several wood crates, all humming as docile honey bees floated lazily about. As he pumped smoke in and the residents began to calm, Patterson then eased a slat from a hive to reveal a world of amber-hued hexagonal beauty. He then took a small spoon, scooped it through the comb thick with honey and handed it to me, insisting I take a bite. With some hesitancy, I did.

It was the best honey I had ever tasted. Easily, hands down. Honestly, I never knew honey could have so many complex layers of flavor. Apparently, the bees in this part of his collection feed off resident creosote and wild arugula, and with a decent palate, you could make out every aspect of our surrounding desert environment with one swift lick.

This is the same honey that goes into every aspect of Dos Manos Apiaries, a small out-of-home company Patterson began a few years ago.

It all started with a gift of bees from his then-girlfriend.

"If you knew this girl, then her getting me a beehive out of the blue was not out of her character," Patterson says. "I have always had a garden but never grew anything sweet. So, I met with the beekeeper from her job at Marana Heritage Farm and decided to take this weird gift to the next level."

Patterson has been a sommelier for several years and worked on the restaurant side before starting a gig with a distributor. When word got out that he was in the honey trade, some of the higher-end restaurants he used to work with took an interest in his honey.

"Miraval was one of the first to hear what I was doing with bees and started an account," says Patterson. "In 2015, we created a bee program completely out of nowhere and that's how Dos Manos Apiaries began."

It turns out that honey is a lot like wine. Each hive will produce wildly different variations on a common theme, depending on its location, climate and even altitude. For example, a vineyard in Chile that produces a certain red grape in late spring will taste far different than a similar red grape strain growing in Northern California. Same goes for honey. The honey that is imported from Argentina, which is our main source for store-bought quality, has a distinct character profile from the honey that comes from large-batch hives in India or here in the United States. Bees feeding off Sonoran plants such as yellow bells, ocotillo and prickly pears will produce honey ranging in color from almost clear to ruddy brown.

The flavor depends on the local flora and even fauna. That means a citrus accent from a Don Manos product could easily go into a dessert you are about to enjoy at Hacienda del Sol, or perhaps a sour-noted honey could be used in a cocktail over at the Coronet.

"Right now, I have about a hundred hives in about nine different locations, each one producing dramatically different flavors," Patterson says. "Tasting honey is an immediate experience, unlike wine. I do miss the wine business but that's what it is, a business. I thought about expanding but being in business is work, being a sommelier is work. This is just fun. How cool is that?"

Miraval has regular Dos Manos honey tastings and when there is enough to spare, you can purchase jars of his multi-hued, multi-faceted product at Time Market. It takes a certain nuance to savor the essence of real local honey. But when you do, the result is oh so sweet.