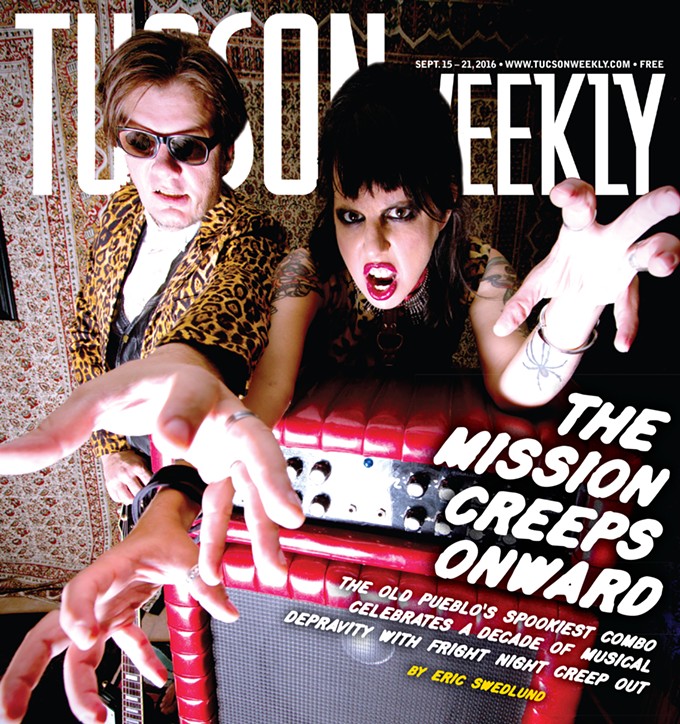 With Lenguas Largas and Quarter Royale

Theirs is a nightmarish playground of zombies and monsters, of skeletons and witchcraft. Songs jump listeners like haunted-house spooks. They transform the macabre into ecstatic and mischievously spirited entertainment, on record and especially on stage. And that's no mean feat. Go ask Alice.

See, The Mission Creeps have been on a decade-long quest to play rock 'n' roll with the escapist thrills of classic horror films. After ten years a band can get damn good at that kind of thing, at hooking people with metaphorical frights and tunes. So, yes, it can be said that these Creeps are campy and dark, undead and thrillingly alive.

And some things are sacred.

There have been long nights since The Mission Creeps' debut show—on 6/6/06, naturally—full of ups, downs and enough lineup changes that they're currently on the, um, 13th drummer, but the core duo of singer/guitarist James Arr (who also plays theremin) and bassist Miss Frankie Stein haven't deviated from the path they forged at the start, bonding over beers and a shared love of obscure surf-horror outfits like The Ghastly Ones.

"I'd had the name Mission Creeps for a couple years before I met Frankie," Arr says. "I love the name. It has this military connotation of mission creep, when something takes a life of its own and leads to eventual disaster."

Though mission creep has existed in some ways over the life of the band, their six recordings have maintained remarkable consistency, molding garage, surf and punk and delivering it with heady theatrics, performing shows in costume and holding to the themes visually and musically.

"We started with parameters," Arr says. "I wanted to do a band with style, to put on a show. I never really thought of Mission Creeps as a creepy thing because creep is a verb, but people automatically thought that as the band developed. We became somewhat of a Halloween band, but that's been thrust upon us. To me, it's more about the mission than the creep."

"The stuff we started with was a little more fun and bouncy and then some of our albums got darker," she says. "This is definitely more fun and cheeky. That's what we wanted." The tone is set by the album's cover image, a campy drawing by Los Angeles cartoonist Sean Dickinson that features The Mission Creeps as characters, with elements and images from the songs scattered throughout.

Arr says one of the album's strong influences came from his childhood. Growing up in Los Angeles, he fell for the Friday night B-move show on the local KTLA. Seymour's Monster Rally played low-budget horror and science fiction movies, with the pre-Elvira host giving the show an offbeat, cheeky sense of humor. In the same era, The Brady Bunch's "Fright Night" episode also created a mood of spooky fun that stuck with Arr as he wrote the title song.

"I wanted to write a silly song and the original inspiration was that episode," Arr says. "I had this image of eating popcorn and being a kid, saying up till midnight when you're not supposed to and watching The Blob."

The band had built up more than 40 songs when it came time to start work on Fright Night Creep Out and as recording progressed, they chose to hold back some of the more serious tunes, focusing on what they say is more autumnal-sounding than winter. It's an album, Arr says, geared to playing live.

The band earned its reputation playing live, performing in costume, with go-go dancer Bunny Boom Boom joining them for about eight years now. They take inspiration from the more theatrical elements of bands like The Ghastly Ones and Alice Cooper.

"We're possessed by the music," Stein says. "We go for it on stage. We get into the music and just get mesmerized. We're who we are, for good or ill."

The darkness in the songs, the shadows of the stage show and the costumes the band wears all afford a degree of remove they find comforting.

"There's anonymity in darkness. People can feel comfortable, the freaks and the misfits, like me and Frankie. You can be more of yourself in a costume," Arr says.

"I've always been painfully shy," he continues. "In middle school and early high school, I had really bad acne and I just retreated to my room to practice. At some point, every musician has to retreat into some room and spend hours and hours practicing scales. That was my time for that. If I had perfect skin, I would've been a total douche."

Stein grew up in the Deep South, musically isolated until starting college in Florida, where she picked up the bass.

"We only had access to pop music or classic-rock radio. We had to drive to the next county to go to a record store. Until I went away to college, I'd never heard The Smiths or Joy Division or Sisters of Mercy." Arr and Stein first met in Tucson in 2005. Stein and former Tucson Weekly music writer Annie Holub were putting together the Tucson Band Map, a look at 20 years of the city's musical history that was displayed at Club Congress during the venue's 20th anniversary festival. Arr, an expert in social network analysis, gave Stein the software to do the map.

Stein was in the band Sencha and Arr was playing in surf-rock group The Sonars. Both were toiling a bit and as they realized they shared a host of musical influences, Arr saw in Stein a perfect companion to help bring The Mission Creeps to life.

Romance bloomed between them too, and it's in the tunes. Underneath titles like "Headstone," "Empty Coffin" and "Graveyard Shift," the first album is mostly a collection of love songs. The relationship has actually helped the songwriting over the years.

"I'm grateful to be in a band with my wife. I feel fortunate," Arr says. "What's cool is that a lot of songs come from Frankie and I brainstorming together. It's an integrated process of working together and thinking up different stuff."

On the current album, Hexed (Some Kind of Witchcraft) is a love song in the classic Mission Creeps vein, turning a B-movie trope upside down and stretching the metaphor in a different direction.

The Mission Creeps had always aimed for a fuller sound, adding percussion, keyboards, sax and harmonica to the guitar-bass-drums core. Yes, bandmates have come and gone and currently, the band is sticking to the trio sound, with drummer George Palenzuela in tow.

Though it's not quite Spinal Tap, The Mission Creeps have suffered their share of drummer fall-out over the years.

Once, rehearsing with Flam Chen for a performance, the band discovered the girlfriend of one drummer hiding in the bushes spying on her boyfriend. Another drummer, during the brief window of time that Chatroulette was popular, attempted to use it as a promotional tool and opened his laptop next to his drum kit during rehearsal. That practice ended quickly after the chat landed one too many times on "things you can't unsee."

The Mission Creeps have played good shows with every drummer, but part of the problem is the band's commitment to touring. They play regularly in Phoenix and California and have embarked on bigger West Coast and nationwide jaunts. The lineup shifts have been a bit painful, and Stein says some of that disappointment bled over into their Darker Cells album.

"Initially we had this larger group and we thought could maintain control of that, but it's really difficult to keep something like that together over time," Stein says. "It feels like family, but you lose touch when it's over. I was disappointed that we lost some of those people and those relationships. Some things in that album are indicative of that. I realized that we couldn't keep that many people together. It was never going to be as important to other people as it was to us."

"There are different periods because there were different personnel on each album," Arr says. "We started as a six-piece and over the course of time with touring, now we're a three-piece. So the personnel determines the era of the band,"

"Our first album was fun," Stein says. "Then the EP was about the political landscape. Dark Cells was really dark and serious. Halloween was driven by our haunted house and working with the Southern Arizona Ghost and Paranormal Society. For Midnight Blood, we banged it out in a weekend."

Having formed in the wake of the Iraq War, the Abu Ghraib scandal, the warmongering of Dick Cheney and the cynical Bush administration manipulation of "terror alert levels," the politics of the time were part of the context of The Mission Creeps' early days.

For a while afterwards, much of the songwriting was "taking horror tropes and turning them on their heads," Arr says. "There's always an edge to what we do. Because I grew up on the Sex Pistols, The Fall, The Germs, I have that in the back of my mind.

"So even on a song like 'Party By The Lake' there's the line, 'You can't kill me, I'm already dead.' It's not just straight campy fun. There's an edge to it."

That edge, along with the band's diligence in sticking to its freaky essence, have made The Mission Creeps a Tucson consistent, and a musical anomaly. The band keeps its area shows to a minimum, but tours regularly enough to have earned larger audiences in bigger markets.

"It's nice to go to Phoenix, or San Diego or LA and have it packed," Stein says. "We go for broke. It's exhilarating to make people dance and laugh and be happy, I feel like it's a second job, but I've never had a job before that's so completely unpredictable. It can be magical and it can be chaos."