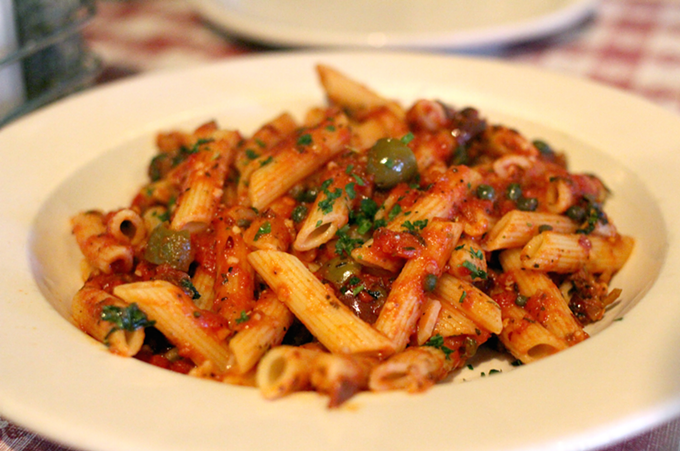 When it comes to eating Italian stateside, you essentially have three options. There's the upscale, handmade and tradition-focused cuisine that oft brands itself as a modern trattoria. There are also the deli-style pasta houses that serve up big portions in Italian-American style, offering a distinct take on classic dishes. Of course, there are also junk food Italian joints like Olive Garden that offer fat-saturated eats quickly and with bargain basement special pricing.

I'm not here to tell you which of the three to eat at, as I've found myself craving perfectly-crafted, al dente noodles or an endless supply of breadsticks as much as the next guy. They all serve a purpose at some point, right?

Walking into Dominick's Real Italian, I expected the family-style Italian-American genre of cooking, despite being billed as "Real Italian." I try to manage expectations, though I've found myself surprised time and time again by the food you find in Arizona strip malls. In this case, Dominick's shares its street corner with several other eateries, including a Jerry Bob's and a Mama's Hawaiian BBQ, as well as a Texas-style and a Mexican restaurant, on the corner of Thornydale and Cortaro Farms roads.

The dining room's décor looks like the stereotypes for Italian restaurants that you're used to: red and white checkered table cloths, dark wood furnishings, some maroon vinyl. The bar, on the other hand, looks like a cross between a '90s martini bar with bright neon lights shining through liquor bottles and a good ol' boys sports bar, outfitted with a several large TVs.

In terms of its drinks, you'll find unimpressive offerings for beer, wine and cocktails throughout. The best of the cocktails came under the Arizona Distilling Co. section, which I assume was made by a distillery or distributor rep to showcase those spirits specifically and not something made by the bartending staff at the restaurant.

In any case, with online ordering and carry out dining options, you could always pick up food and pour your own drinks at home, if the food is worth it. Unfortunately, at Dominick's, it isn't.

The first issue is that, while the service is friendly and prompt as far as the servers seem to be able to control it, food takes far too long to get out of the kitchen. Without the distraction of a tasty beverage, that wait seems all the longer. However, you will have the house garlic knots quickly delivered to your table gratis, which are a step below those chain breadsticks we've all come to love.

Starting off, a host of deep fried options like fried calamari, fried cheese, fried zucchini and fried wings are on the menu. The calamari fritti ($7) offer almost no flavor in either the breading or the squid inside. When dipped in the accompanying spicy marinara, things begin to improve, until you realize you're just eating it for the crunchy texture and not for the taste at all. Dressing drenched salads and passable soups won't please as starters any more.

All can quickly be forgiven and forgotten with a great plate of pasta, though. At Dominick's that plate never did come. From the bland Dominick's homemade marinara with Dominick's homemade meatballs and spaghettini ($11) to the abrasive Pasta Rustica ($11.50), you'll be met with poorly cooked, dried pasta topped with uninspired sauces time and time again. The latter of those two, with its mix of capers, olives and a red pepper flake filled sauce, kind of reminded me of a dish I would have made in college with whatever jars I had in my pantry at the time. It wasn't a bad mix of things but it was just that—a blend of premade things presented as a composed dish.

The entrée section pairs those box pastas with a big portion of meat. I am a big proponent of piccata, so seeing Dominick's offering a chicken piccata ($14.50) on the menu was a no brainer for me. While I have been known to eat capers straight out of the jar, I wasn't pleased with the hundred or so that topped my chicken and overpowered the white wine sauce. The lemon wedges on the side looked like they were borrowed from the bar. I wish I could say the restaurant's pizza impressed, but with a completely burnt bottom crust and a thick layer of plasticy mozzarella, I was far from impressed, or even satisfied. I've often heard people complain about 12" pizza prices as upscale downtown eateries like Reilly and Pizzeria Bianco, which is strange because Dominick's serves the same size for similar prices at a fraction of the quality. Hey, they're the ones that claimed "Neapolitan-style" on the menu.

If anything, Dominick's cannoli ($2), which, according to the server, offers housemade filling in a premade shell, was a small consolation at the end of a generally flavorless meal.

Interestingly enough, each time I went to Dominick's the restaurant was either full or beginning to fill up. People in the area seem to like the spot, maybe because of its large portions or maybe because it feels familiar. Either way, I admitted earlier to eating at Olive Garden on occasion, so who am I to judge them?