For Jeff Yanc, the best part of going to the movies is going to the movies. In other words, it’s not just about seeing a movie, but the communal experience surrounding it—gathering with strangers in a dark room, gazing up at the same screen, reacting in real time to whatever pops up on it and discussing its merits in the lobby afterward. It’s the guiding principle behind the Loft, Tucson’s premiere independent cinema, and especially its titular annual film festival, for which Yanc serves as co-director. And so, last year, when a certain global health crisis made gathering in any enclosed space inadvisable, he and the other organizers faced a hard choice: follow the lead of many other festivals and go virtual, or go dark completely.

They chose the latter.

“Our goal with the festival, in my mind, has always been about connecting audiences with each other and with film,” says Yanc, who also programs films at the Loft year-round. “That in-person component is really the driving force of the fest, because it’s not just about watching movies, it’s about being around people, which you can’t really replicate virtually. You can do Zoom discussions and chats and things like that, but it’s not the same thing, and we didn’t really want to do that. So we just skipped it entirely.”

It was, in retrospect, the right decision, Yanc says. But for the local film community, the cancellation left a significant void.

Since it started in 2010, the Loft Film Fest has sought to bring the best of the festival circuit to Tucson, culling from the likes of Sundance, Venice and Cannes and screening indie and foreign films that may otherwise never make it here. Again, though, it’s not just about the movies—the city has other film festivals, after all. Most of them, however, are dispersed among multiple venues, or aimed at niche audiences. Concentrated under a single roof, with a lineup ranging from intense dramas to light comedies to bizarre genre mashups, the Loft Film Fest is, for a week every year, the center of Tucson’s cinematic universe. To lose that, even temporarily, stung, not just for the city’s hardcore cinephiles but the international filmmakers who rely on festivals to drum up buzz and get their work onto more screens.

For that reason, this year’s installment, taking place Nov. 10-18, carries a bit more weight. While the Loft itself resumed indoor screenings in May, the return of the festival feels like a true homecoming—a confirmation that, after a year stuck watching movies from the couch, we can start actually going to the movies again.

“It certainly has emotional significance, because it is a sign for us who work here of getting back to what we were doing before the pandemic,” Yanc says. “But I think it’s also just a signal that the industry of movie theaters and festivals is getting back. It’s a sign of health for the whole
industry.”

And when he says the festival is back, he means all-the-way back, not the half-in-person, half-digital model adopted by many of the festivals Yanc attended this year. All 41 selections will screen exclusively at the Loft, either inside the theater or in the parking lot at its Open-Air Cinema, which the theater devised in order to stay afloat during the pandemic.

Of course, given that the pandemic isn’t actually over, the festival won’t operate exactly the same as it has before. Capacity for the indoor screenings will be halved, and entry requires either proof of vaccination or a recent negative COVID-19 test; masks must still be worn in the lobby and bathrooms as well. And then there’s the lack of big-name guests. In the past, the festival has managed to book several high-profile actors and directors, including Rita Moreno, John Waters and Roger Corman, for live introductions and post-screening Q&As. This year, the only person you’re likely to see onstage is Yanc.

“In a normal year, a guest will drive what films we show,” says Peggy Johnson, the Loft’s executive director. “It’s really an interesting year to have it just be about the quality of the films.”

That isn’t to say there aren’t any marquee names involved, however. The festival is bookended by two major draws: Parallel Mothers, the new melodrama from Spanish auteur Pedro Almodovar, and Julia, a crowd-pleasing documentary on beloved chef Julia Child. In between, there’s Kubrick on Kubrick, a film about the legendary Stanley Kubrick constructed around previously unheard audio recordings; The Humans, an adaptation of Stephen Karam’s Tony-winning play, starring Richard Jenkins, Minari’s Steven Yeun and, uh, Amy Schumer; A Hero, from Iranian director Asghar Farhadi, who won the Oscar for Best Foreign Language Film in 2012 for A Separation; and a screening of the Buster Keaton classic Sherlock Jr., featuring a live score from the American Harp Society and Arizona Friends of Chamber Music.

But the best part of any film festival are the movies you never saw coming—those unexpected discoveries you would have otherwise never thought to see that end up sticking with you. Here are eight under-the-radar films that we’ll definitely be making time for.

If the reviews quoted on its Wikipedia page are any indication, Chameleon Street just wasn’t made for the times it was made in. Sure, it won the Grand Jury Prize at Sundance in 1990, but critics couldn’t wrap their heads around the movie’s digressive structure, and it struggled to find distribution. It eventually faded into a cinematic footnote, and Wendell B. Harris, Jr., who wrote, directed and starred, never got the chance to make another feature. But with daring, off-kilter examinations of the African-American experience now de rigeur at the multiplex, the world may finally be ready to embrace the story of a Black con artist who takes the concept of “code switching” to absurd new levels. This 4K restoration threatens to make Chameleon Street the next Sorry to Bother You—nevermind that it originally came out 28 years earlier. Open air screening at 8 p.m. Wednesday, Nov. 10.

Speaking of con artists, meet  Tim Carey, an actual artist who, in 2013, effectively conned his way into a commission to create the world’s largest stained glass window for a Kansas megachurch, despite having no idea how to work with stained glass. Whoops. To get it done within the three-year deadline, he brings in the amazingly named Narcissus Quagliata, described as the Michael Jordan of glass work, to assist, and their strained, intergenerational mentor-student relationship forms the center of Justin S. Monroe’s documentary. It looks like mad fun, but paired with Chameleon Street, it also sparks a conversation about who in society gets labeled a “scammer” and who is simply a “charming rogue.” That’s probably not the intent, but unexpected discussions are what all film festivals should aim to start. Open-air screening at 8 p.m. Thursday, Nov. 11. 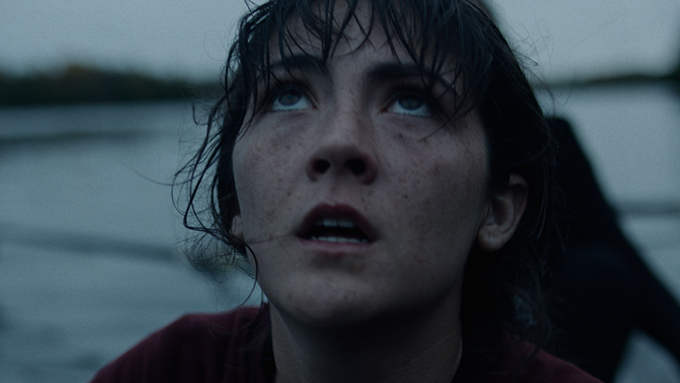 In this study of competitive drive gone way the hell overboard, writer-director Lauren Hadaway wrings white-knuckle tension from one woman’s obsessive desire to advance up the ranks of her school’s rowing team. Isabelle Fuhrman stars as a college freshman who essentially wakes up one day and decides to become a varsity-level athlete, pushing herself to physical, psychological and presumably ethical extremes to get there. Yanc singles out The Novice as one of his favorites of the festival, comparing it to other portraits of sociopathic striving such as Whiplash and Black Swan. It doesn’t have a trailer yet, so you’ll have to take his word for it, but if you’re a regular at the Loft, you already know you can trust him. Screening at 7:30 p.m. Thursday, Nov. 11.

All film festivals need a dose of madness, and this bonkers-looking French production certainly seems dosed with something. “An erotic sci-fi acid western” is Yanc’s best shot at a neat description, although from the looks of it, “Nicholas Winding Refn remaking Babarella using the leftover catering budget from Drive” might also work. In any case, as much as we all love Argentinian family dramas and heartwarming comedies about gardening, a hallucinatory fever dream featuring intergalactic bounty hunters searching for a killer on a planet that’s inhospitable to male DNA is always a welcome diversion, particularly for a rowdy late-night screening. A good deal of reviews note that the plot is tangential to the glittering, lo-fi set design, throbbing synth score and general aura of stylish weirdness, and honestly, that just makes it sound even better. Screening at 10 p.m. Thursday, Nov. 11.

As any longtime fan of professional wrestling knows—this writer’s hand is raised—the sport-cum-performance art can be a vehicle for more than campy entertainment, especially in Mexico, where lucha libre is part of the folk tradition and not just a geek subculture. Luchadoras follows three women on the verge of breaking into the business, and while each subject has a different reason for doing so, just stepping in the ring serves to challenge the toxic machismo of the culture that surrounds them—a particularly bold statement in Ciudad Juarez, a city notorious for its high rate of murder among women. It seems reductive to call this documentary “the true-life GLOW,” but the sociopolitical overtones and beautifully shot grappling sequences should appeal even to those viewers who don’t know a tope suicida from a hurricanrana. Screening at 1:30 p.m. Friday, Nov. 12.

If the Loft gave out acting awards, Yanc says the betting odds would be on Krisha Fairchild, who stars in this meditative drama as an aging pot farmer struggling to adapt her business to the legal use era. Indeed, the trailer shows glimpses of a performance so naturalistic it’s easy to mistake for a documentary at first. It might as well be one: Shot clandestinely on actual illicit cannabis grows in Northern California, Freeland tells a deeply relevant story, especially for a newly legal state like Arizona. Yes, it’s great that weed prohibition is gradually ending. But just because the War on Drugs is letting up, doesn’t mean there aren’t still casualties. Open-air screening at 8 p.m. Saturday, Nov. 13.

If After Blue is like dropping acid with Alejandro Jodoworsky at the edge of space, Strawberry Mansion appears to be like ’shrooming with Michel Gondry inside a child’s playhouse. Set in a candy-colored alternate reality—or perhaps not-so-distant future—where the government is allowed access to people’s dreams, an auditor visits a reclusive artist and starts rooting around in her subconscious, and what follows looks something like an ’80s Jim Henson production inceptioned into Eternal Sunshine of the Spotless Mind. In the trailer alone, there’s a werewolf, giant talking rats in sailor outfits, a frog playing saxophone, a large caterpillar inching across the desert, comets with human faces and some kind of blue horned sea demon. The tone is more whimsical than wigged-out, but it’s still plenty psychedelic, so plan your “enhancements” accordingly. Screening at 10 p.m. Saturday, Nov. 13.

Catch the Fair One

According to Yanc, an unofficial theme of this year’s festival slate is women fighting against the patriarchy, and no film takes that idea more literally than this revenge thriller from director Josef Kubota Wladyka and executive producer Darren Aronofsky—although in this case, “fighting” might be too weak of a word. Real-life boxer Kali Reis stars as a former Native American boxing champion in search of her missing sister, who ends up infiltrating a sex trafficking ring and punching a bunch of dudes very hard in the ribs. Despite that synopsis, the intense, grim pallor of the trailer suggests something much heavier than a female-fronted flip on the Taken formula...but if it was just a female Taken, would that really be so bad? Screening at 5 p.m. Wednesday, Nov. 17.