Clerk of the Court faces reelection challenge from longtime director 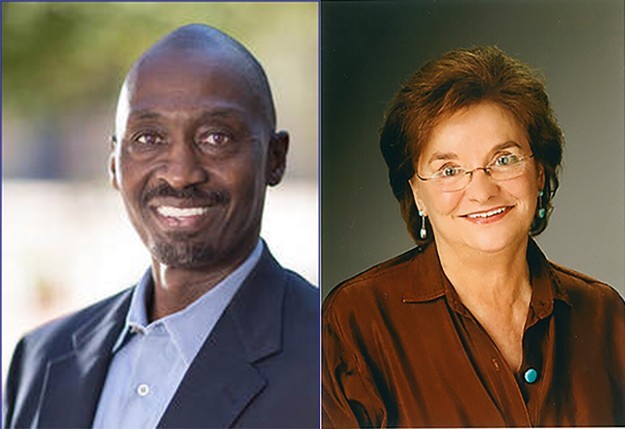 The clerk is an elected official that serves a four-year term, and Republican Toni Hellon has held the position for the past five years. In 2013 she was appointed by former Gov. Jan Brewer to replace the previous clerk, Patricia Noland, who decided to retire. Hellon successfully ran for re-election in 2014.

This year, Democrat Gary Harrison, who served as a division director in the clerk's office for 30 years before retiring this past January, is running for Hellon's position. He believes that the budget needs to be handled differently, as well as the communication between employees.

"Over the 30 years that I've been there, all three clerks, I've seen that budget be mismanaged," Harrison said. "I think everyone thinks that they can manage better, but when you're on the outside looking in, and you get to see all the mistakes, after a while it becomes second nature to you as to what should happen with this budget."

According to Pima County's 2018/2019 adopted budget, the Clerk of the Superior Court is expected to spend about $12.1 million this fiscal year. Of that amount, about $10.8 million is expected to go towards salary and benefits for the office's 200 employees.

In the past five years, Hellon said she has been able to stay in budget and cut expenses. She said the office used to be very "top heavy." Before she assumed leadership, the office was set up with an elected clerk in charge, a Chief Deputy clerk as second in command and three associate clerks who would divvy up responsibility for supervising the rest of the employees.

Hellon said those three associate clerk positions have been eliminated through retirement, and now her and Chief Deputy Clerk Greg DeMeritt supervise the six divisions between the two of them.

When Harrison retired from his long-standing position as a division director, Hellon said she didn't hire a replacement for him.

"When somebody retires, somebody moves, somebody takes a new job, we wait a while before we replace them to try to figure out whether it's really necessary," she said. "How necessary is this job? Can other people take on portions of it? So each time you wait a bit, it helps the budget."

By cutting all of this, Hellon said that more money was able to be allocated to the rest of the employees in the form of raises.

While raises are always a good thing, Harrison said that the shrinking of the staff has created an increased workload on the existing employees. However, he believes the office can still do more with less by implementing cross-training.

"When you're working with a limited staff, cross-training is the way to be able to get the most out of the people and out of the budget," he said. "I have presented that [idea] before in years past and it has always been kind of shrugged off, but it's something that I've always wanted to try in that office because I know that it will save money if we cross-train."

By cross-training, Harrison means that employees could spend a month or so in a unit that is different from the one they are familiar with so they could have a chance to learn how to work in different areas.

He said if multiple employees from one unit call out of work that day, he could move other employees who are cross-trained around to make up the difference. He believes this is also an effective way of promoting communication between units.

"What I see is putting employees and other directors in a position of ownership," he said.

Harrison came to Tucson from Ypsilanti, Michigan in 1973 to play basketball at the University of Arizona. After graduating, he moved back to Michigan and worked for 10 years. Then he returned to Tucson and took a job at the clerk's office by suggestion of former Mayor Jim Corbett, who was the clerk at the time. He thought his job would be temporary, but he ended up staying for three decades, moving up the ladder through various divisions.

"I've worked every aspect of that office from the bottom all the way up to the top," Harrison said. "I would say I'm probably more prepared than any clerk that has ever worked that office."

After deciding he wanted to run for the clerk's position, Harrison said he had to retire because he wasn't allowed to take a leave of absence in order to run. He believes this campaign has been a long time coming; he said he wanted to run 20 years ago but felt that the time wasn't right until now.

"I can't tell you how many people I have helped because of that job," Harrison said. "I've been retired, I get calls now: 'Gary how do you do this?' 'Where do you file this?' I still get those calls now."

Before serving as clerk, Hellon served as a state senator in Legislative District 26 from 2001 to 2007. She credits this professional experience with giving her negotiation skills.

She said an important part of her job has been negotiating with higher departments for salary raises for her employees—since she is required to find money within the department to give raises—as well as coordinating IT services for the entire court system.

Hellon said the clerk's office is much bigger than it seems. It is made up of 200 employees who work in 19 different units of expertise housed in four locations. This team keeps track of all civil, criminal, probate and juvenile court documents. The largest amount of filings they have are from civil court, which often process marriage licenses, protection orders, divorce records and more.

During her time as clerk, Hellon's largest project has been switching the office's filing system from hard copy to e-filing. With an e-filing system, people don't have to come in to the clerk's office to fill out paperwork, they can do it online and send it in.

From there it will become a part of the office's database, which eliminates the need for manually scanning documents. These e-filings can be accessed electronically as well, so people can view documents from their personal device.

"For about three years, we have had e-filing for civil documents," she said. "We're working now on our own to start that with criminal filings."

Hellon hopes to get all court documents—except for juvenile court because of minors' privacy—set up in an e-filing system, but she added the transition takes time because the office has to work with other departments in order to change that process.

Hellon said she is proud of her progress so far, and she hopes to stick around for another four years to see that progress come to fruition.

"I suppose you always want to complete the things you've started, but I think you never can," Hellon said. "I've been around business and politics long enough to know that when you leave there is always going to be things that are unfinished. It's just the way it is, but we're making good progress and I'm excited about that."