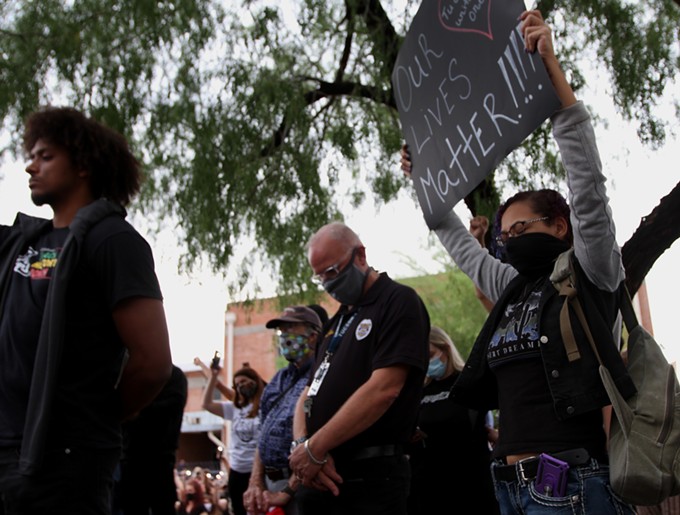 File photo by Austin Counts
Tucson Police Chief Chris Magnus bows his head during a moment of silence during a vigil for George Floyd.

“I am, of course, very honored to be nominated by the President to lead Customs and Border Protection,” Magnus said. “I look forward to speaking with senators and hearing their thoughts and concerns.”

City officials said Magnus is an ideal choice because of his progressive efforts to promote community policing and his recent work managing the police force in Tucson, a city close to the U.S.-Mexico border.

"Chief Magnus has always understood the importance of distinguishing the role of local law enforcement from federal immigration enforcement and how critical this is to protecting community trust,” said Tucson Mayor Regina Romero in a statement on Monday. “He has gained valuable experience serving as police chief of a major city here in the borderlands.”

Tucson City Council member Karin Uhlich, who was on the council when Magnus was appointed, said he has implemented “key policing measures and focused on alternative methods in a diverse community with a long history of its close relationship with the U.S.-Mexico border.”

After SB 1070, the Mayor and council directed a series of amendments to TPD's General Orders to protect victims and witnesses of crimes from arbitrary immigration status inquiries, prohibit stops and detentions based on "suspicions" of unlawful status, which Magnus implemented, said Romero.

She also noted his efforts in streamlining TDP’s U-visa process, a program that grants legal status to victims willing to help police and prosecutors investigate and prosecute a qualifying crime, and the creation of a new refugee liaison program.

In a 2017 op-ed piece in the Times, Magnus criticized President Trump's immigration policies.

“The harsh anti-immigrant rhetoric and Mr. Sessions’s reckless policies ignore a basic reality known by most good cops and prosecutors,” he wrote. “If people are afraid of the police, if they fear they may become separated from their families or harshly interrogated based on their immigration status, they won’t report crimes or come forward as witnesses.”

If confirmed by the U.S. Senate, Magnus would serve as Commissioner of Customs and Border Protection and report to Department of Homeland Security Secretary Alejandro Mayorkas to lead border security and immigration policies as well as coordinated defense. He would be tasked to handle a border facing an increase in migration four times what CBP saw in 2019.

“As Tucson’s police chief, Chief Magnus understands what it looks like when the federal government fails Arizona on border security and immigration, and that is the experience and perspective he can bring to this position,” said Kelly. “We’re facing a humanitarian crisis at our border that is already straining Border Patrol in Arizona, and I look forward to speaking with Chief Magnus about his plans for Customs and Border Protection and providing a secure, orderly process at the border that prioritizes safety and public health.”

CBP saw southwest border encounters increase by 70 percent from February to March, with 172,331 encounters reported for March. That’s more than two-thirds higher than March of 2019.

For years, non-profit organizations such as Catholic Community Services, which runs Casa Alitas, a temporary shelter for asylum seekers, have helped migrants dropped off by Border Patrol, with little communication and a lack of transparency from the organization.

While Border Patrol informed Pima County and Casa Alitas to prepare for the influx in migrants in February and has included the county in communications as they provide transportation for asylum seekers dropped off by Border Patrol in Ajo to Casa Alitas, the county continues to struggle with CBP when they change the release dates and times and the number of people being dropped off.

Ward 6 Council Member Steve Kozachik, who works closely with Casa Alitas, thinks Magnus would be “a breath of fresh air” and could be a “real heavy lift” to change the culture of the organization.

“They are very insular and it's really difficult to get an effective communication chain going with them. It's also very difficult to find out what you need to get information on internal investigations,” said Kozachik. “Chris has been a real progressive chief, in terms of our own sense of transparency within the police department... I think from the standpoint of just opening up the agency to transfer to a more transparent process, I think would be really something he could bring to the table.”

He points out the three review boards in place involving civilians and some outside agencies, like the Force Review Board (FRB), and the City's Community Police Advisory Review Board, as examples of the police department’s efforts in transparency.

Kozachik said Magnus is “sensitive” on approaching immigration and the border from a humanitarian standpoint.

“What he would be able to do though is put into power, put policies in place, so the work with the people on the ground, such as people I'm dealing with, that work would be done in a more humane fashion,” said Kozachik.

U.S. Sen. Kyrsten Sinema said Magnus’ nomination “represents a positive step toward ensuring the administration understands and addresses the needs of Arizona communities. Our state pays the price for the federal government's failure to fix a broken immigration system. I'll continue working to ensure the administration takes meaningful steps to support our border communities, secure the border, and treat all migrants and unaccompanied children fairly and humanely—and I look forward to talking with Chief Magnus soon about his nomination.”

Magnus has gained community support throughout his career when he used a human-first approach.

Back in 2014, when he was still police chief for Richmond, California, Magnus received criticism from the local union when he was photographed standing alongside #BlackLivesMatter protesters in uniform.

“Chief Magnus demonstrated strong leadership yesterday when he stepped up to take responsibility for the actions of his officers,” Ortega said. “I appreciate the direct accountability and responsibility he took for his team, but his resignation will not help us continue to transform our police department.”

Ortega also stated at the time that Ingram-Lopez’s family did not wish for him to step down and he had received messages from community members expressing their support for Magnus.

While Magnus and local officials were honored and excited about the nomination, they have a budget to work through as Prop 407 monies are allocated to remodel some police and fire station remodeling, as well as a 911 center.

“As I’ve told our department members, serving as Tucson’s Chief of Police has been, and continues to be, one of the best experiences of my career in policing,” Magnus said. “Tucson is a special community and TPD is a professional, community-engaged police department. The confirmation process is never a certainty. As the Senate moves forward with its deliberations, I remain committed to serving as your chief of police to the best of my ability.”

More »
More The Range »
All News & Opinion »
Comments (1)
Add a comment
Subscribe to this thread:
By Email