TPD Chief Reveals Details of Death of Man in Police Custody Two Months Ago, Offers Resignation to Mayor and Council 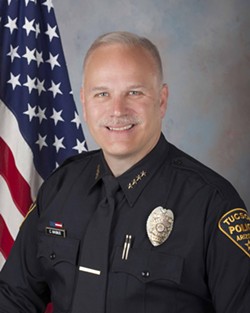 Tucson Police Chief Chris Magnus offered to resign after revealing the details of an investigation into the death of a man in police custody in April. Mayor Regina Romero said Magnus' offer was unexpected and she would consider it.
Carlos Adrian Ingram-Lopez died after Tucson police detained him on April 21, 2020. He was 27 years old.

The in-custody death was just revealed yesterday, June 23, and has been met with outrage from the Tucson community. A medical examiner’s report determined Ingram-Lopez suffered cardiac arrest from a combination of physical restraint by the officers involved and acute cocaine intoxication.

During a Wednesday press conference discussing details of the event, Tucson Police Chief Chris Magnus offered his resignation to Mayor Regina Romero and called for “full accountability” within the department. Romero said she was not expecting Magnus' offer to resign and would have to consider it before commenting further.

Magnus said the three officers involved in detaining Ingram-Lopez violated department policies for interacting with people who are in mental distress or under the influence of drugs. All three officers have resigned; Magnus added that they would have been fired otherwise for “multiple policy violations.”

Magnus said Ingram-Lopez’s grandmother called 911 at 1 a.m. on April 21 to report that her grandson was “drunk, yelling and running naked.”

Body camera footage shows officers arriving at the home and screaming at Ingram-Lopez to “get on the fucking ground.” Ingram-Lopez is shown running to the garage, where officers handcuff him behind his back and lay him face-down on the floor.

The audio captures Ingram-Lopez screaming in distress, saying repeatedly “no,” “please” and “I’m sorry.” Magnus said Ingram-Lopez was “highly erratic” at the beginning of the encounter, but became more compliant.

The officers in the video repeatedly tell Ingram-Lopez to “relax” as they restrain him, while he is heard breathing heavily, moaning and calling out for his nana (grandmother) asking for water.

Ingram-Lopez asked the officers repeatedly for water and they ignored his requests. At one point, he told the officers he couldn’t breathe. Magnus said the officers were not restricting his airways during the encounter, and made specific mention that a knee was not placed on his neck, referencing the highly publicized footage of George Floyd’s murder in Minneapolis in May.

Magnus reported that Ingram-Lopez was Latino, while one officer who restained him was Black and the other two were white. They restrained him for 12 minutes before he died.

The officers covered Ingram-Lopez with a yellow emergency blanket while he was heard moaning and crying in the video. Shortly after, he began to make gagging sounds and became more distressed. The officer tells him again to relax. He calls out “Nana por favor” shortly before becoming silent.

After a few minutes of silence from Ingram-Lopez, officers can be heard asking “Is he breathing?” They rolled his unconscious body over and distributed NARCAN, a drug that is used to reverse overdoses.

When Ingram-Lopez didn’t respond to that, the officers began administering CPR and continued to do so until Tucson Fire Department paramedics showed up.

Ingram-Lopez was pronounced dead at the scene by paramedics, in front of his grandmother’s garage.

Magnus and Romero called this event a “terrible tragedy” and said they each met with Ingram-Lopez’s family to give their condolences. But they maintained that the actions of these three officers are “not reflective of the department.”

Romero, who was visibly upset after watching the video at the press conference, said the city must adopt measures in response to this incident.

Romero said this incident is proof that even the most progressive police department can still fail.

She proposed the public be immediately notified of TPD’s in-custody deaths, the city establish a new “community safety pilot division” that would focus on support services for those dealing with homelessness and/or mental health needs, incorporate an independent police auditor to review these types of cases, and overhaul the Community Police Advisory Review board.

She also called for a “swift but thorough” investigation into the three officers’ actions by the Pima County Attorney’s Office. Magnus said the attorney’s office is currently reviewing the case, and have not yet determined any criminal charges at this time.

It is unlikely that County Attorney Barbara LaWall will take any legal action against the officers in this case. At the press conference, Magnus explained that in the last 10 years, there have been 12 in-custody deaths including this one. Seven were determined by the medical examiner to be suicides, while the remaining four were “carefully reviewed by the county attorney,” and none resulted in any criminal responsibility placed on the officers.

On Facebook, Black Lives Matter Tucson released a statement saying that TPD did not exhibit self accountability in the aftermath of Ingram-Lopez’s death. They pointed to the fact that the case was not made public until two months later after a “non-transparent” internal investigation was complete.

They added they have no confidence that County Attorney LaWall will prosecute the officers involved in the incident.

“She is the same woman who refused to indict a Pima County Deputy Sheriff who assaulted Immanuel Oloya (a disabled minor) on film,” they wrote. “The same woman who forced Louis Taylor to take an Alford plea that left him with nothing after being wrongly incarcerated for most of his adult life. Who has also refused to prosecute the deaths of two BIPOC men at the Pima County Jail in 2019.”

BLM Tucson repeated their call to defund the police and invest in community solutions that increase the quality of life for Tucson residents.

“The ugly truth is now starring everyone in the face, TPD chose to cover-up the violence its officers perpetrated months ago while smiling into the cameras stating that “Tucson isn’t Minneapolis.’” BLM stated.

Magnus said the public should have been immediately notified when Ingram-Lopez died, but the department failed to do so. The information about Ingram-Lopez’s death, which happened two months ago, is just now coming to light because the police department finished their internal investigation last Friday.

Romero and the other city council members were notified of Ingram-Lopez’s death last Wednesday.

Magnus said a report of the department’s criminal and administrative investigation into Ingram-Lopez’s death will be released publicly and show the exact policies that the three officers violated during the encounter.

He believes Ingram-Lopez’s death was not a result of any “malevolence” or attempt to hide information, but given the current national conversation about policing, any mistakes like these contribute to the lack of trust in the police.