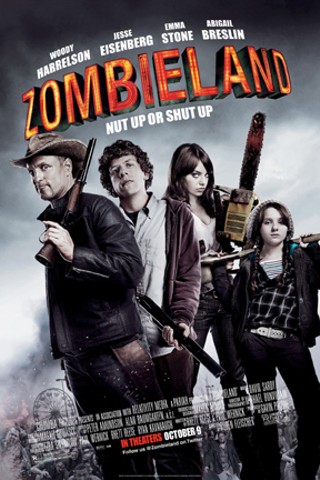 The world is overtaken by a zombie plague, and a ragtag team of human survivors heads for the West Coast in Zombieland, the latest movie to use the undead for laughs. The cast features an amped-up Woody Harrelson and a gracefully neurotic Jesse Eisenberg, a comic team that balances out quite nicely. Throw in some decent hard-core zombie gore, and you get something that is a hell of a lot better than that last George Romero disaster, Diary of the Dead. Harrelson plays an alpha male who digs killing zombies and craves Twinkies, while Eisenberg plays a college student who has managed to survive by following a simple set of rules. The movie is funny, but it does lose some steam in its final act. It contains one of the best cameos in cinema history.
By Bob Grimm

Zombieland is not showing in any theaters in the area.

Reviews/comments (1)
3.9 out of 5
Add a review
Subscribe to this thread:
By Email