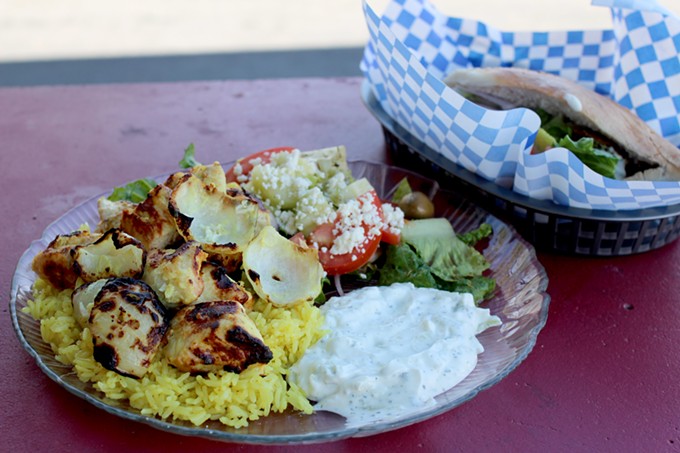 Cons: Service can be iffy and certain dishes needed seasoning.

“I’ve never had Iraqi food before,” said the guest in line behind me, and, although the prospect of an entirely new cuisine might have seemed daunting to them at the time, you’ll find that at Za’atar you can order many of your favorite Middle Eastern and Mediterranean dishes like shawarma, kabob, and more.

Although Za’atar hasn’t been open long and opened relatively quietly on Country Club Road just north of Glenn Street, the restaurant and bakery already has a consistent clientele. The woman in line ahead of me introduced her father to the staff like they were all already family. All of this is likely because the small and modest no-frills spot is welcoming, casual and unpretentious.

If you have questions like, “What is that beautiful three-foot long piece of fresh flatbread in the case?,” the staff is happy to come back, “That’s an Iranian barbari bread.” Sometimes it seems the person running the counter and register might have gotten roped into it by family and might not be of a service background, but even then someone else will chime in to give more information if needed.

The menu at Za’atar is divided into appetizers, plates, salads, sandwiches, sides and dessert, along with offerings from the large fire burning oven. The bakery goods have that beautiful lightly charred and golden brown quality that makes them irresistible. You have your choice of the house bread, which is served plain ($2.50) or topped with cheese ($3.50) or spiced meat (called Lahmajeen—$3.50). Classic pita is fresh with a lightly crispy outer edge for just $1, but then there’s the samoon. If you’re looking for something more unique than what you’ll find at other Middle Eastern eateries in town, get the football-shaped and fluffy samoon bread which is sold two for $1. Be warned, though, that the samoon does tend to sell out, so it’s best to pop in early if you want it.

Going to Za’atar is more than just beautiful bread, though. You’ll want to start with either the baba ghanoush or the mashui (both $5 and served with sliced pita for dipping). Typically, I find baba ghanoush can be a little underwhelming in terms of flavor and texture—more of a menu afterthought than a purposeful dish. That’s not the case at Za’atar where the dip comes with distinct pieces of eggplant that carry a delicate roasted flavor paired with garlic and tahini. The mashui is another of those things that sets Za’atar apart. Like the samoon, you might not have seen it on a Middle Eastern menu before, but the rough pureee of roasted vegetables is a rare treat. While the dip could have used a little more salt and maybe some citrus to really bring out the flavor, the simplicity of the dish also let the roast on the vegetables shine through.

Next, you’ll want to try the restaurant’s take on tabouli ($4). While many taboulis I’ve had before were heavy on the bulgur wheat, this dish is more reliant on generous amounts of parsley and lemon juice. It’s tart and tangy and herby in all the right ways, making it ideal to pile atop almost anything else you order. For a bit more crunch, the fatoush salad offers a standard mix of romaine, cucumber and tomato dressed and tossed with housemade pita chips ($4). The restaurant also serves lentil soup in a cup for $3 or a bowl for $5.

Much of what’s on the Za’atar menu is priced around $5, but, if you’re in for dinner, you’ll want to order one of the large plates, which run between $8 and $10, to sample more of what Za’atar offers. Plates include a veggie combo with falafel and your choice of dips, a hummus and spicy grilled sirloin dish, chicken or beef kabob, gyro and chicken or beef shawarma.

If you have some time, sit and wait about 20 minutes for the chicken kabob, which is freshly grilled and charred with a light marinade. It pairs well with accompanying charred onion, bright saffron rice, a side salad and cooling tzatziki. However, if you’d rather not wait, try the gryo plate. Thick chunks of slow-roasted gyro are shaved off a verticle spit to order, offering a lot of flavor, without the time commitment.

In terms of sandwiches, which come served inside the oblong samoon bread, gyro ($6), shawarma ($6 for chicken, $7 for beef) and falafel are all available with various accompaniments, including the option to make it a combo meal with fries and a drink for a couple extra dollars. For $4, the falafel sandwich will have you returning to Za’atar over and over for a quick, cheap and tasty lunch, which is washed down well with their intriguing herbal iced mint tea.

To finish the meal, order a strong Arabic coffee ($2) and whatever variety of baklava ($2.50) the kitchen made that day. While the dessert does sell out, if you come early enough, you’ll find flaky filo paired with sweet and spiced nuts and more. One of the baklava at Za’atar even tastes as if it was tea-soaked, which kept me interested and satisfied bite after bite, capping off any visit to Za’atar enjoyably.

While the small restaurant and bakery, with its handwritten signs and near bare interior aside from tables and the kitchen, might not look like much, you’ll find that Za’atar offers flavor, authenticity and, perhaps, something you haven’t tried before for a small price.