You Must Remember This

Identity Crisis explores loss of memory, mental health and what it means to be human 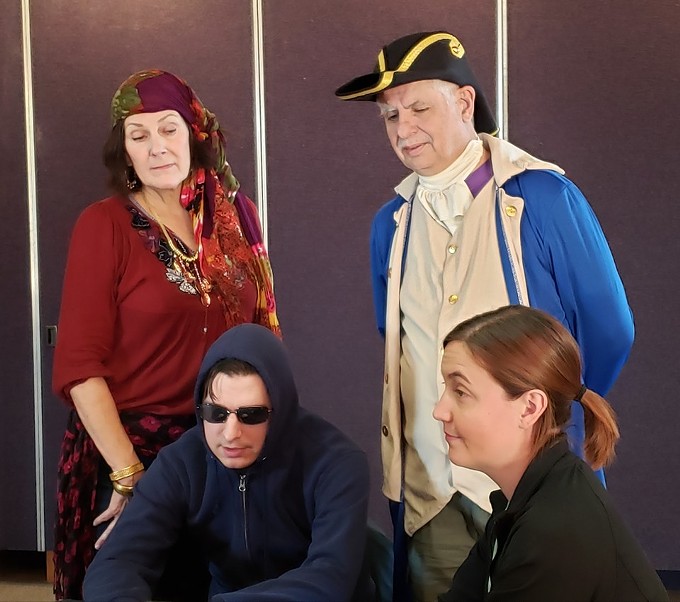 You have amnesia so badly you can't even remember your name. You have no idea who you are or how to regain your memory. No one will even try to help you. You wind up in a care home for people with similar issues: mental breaks and complicated personalities. It is here, at Paradise Found Care Home, that anyone will even attempt to crack the mystery. And, as a blank slate with no idea of your own history, traumas, or coping mechanisms, you are uniquely able to listen to people who have been written off by the rest of the world. This is where Nemo, as his new friends name him, finds himself in Identity Crisis.

I liked this show. It was funny and ultimately deep and heart wrenching. Sometimes it was frustrating that it always went for the joke even in the heavier or more emotional moments, but the play is less about Nemo's memory and more about the ways we all avoid the pain and problems in our own stories. Because playwright and director Gavin Kayner named each character clever variations on their own mental plagues, I believe this is purposeful. There's the foolish Professor Inanis (the Latin root of the word inane). And Nemo, the name he gives the memoryless main character (Nemo means nobody). Then Nulla, perhaps a play on null as the young woman is nothing without her imagined alter ego Phanta, a name which sounds more than halfway to fantasy. Even the stage name of the psychic in the house and person who sees Nemo most clearly, is a play on words: Claire Voyient. The characters seem to know they are exaggerations, even calling themselves caricatures, while still being trapped by their own crises.

This show hits close to home. I left questioning if it is OK to make so, so many jokes about mental illness. I have gone back and forth on this because while the show is thoroughly enjoyable, it is a show that depends on a cartoonish depiction of people suffering from mental states severe enough that they are removed from normal life and live mostly forgotten and sequestered from the outside world. But that same cartoonishness allowed for a glimpse into what struggling with a mental health issue can look like without it being a total bummer.

I have a mental illness. I have found myself, for about the length of time Nemo finds himself at Paradise Found, in a mental health hospital. It was different. Real life tends to be less on the nose. But the strange people who become momentary best friends, the darkness, the coping in any way you have to, and, maybe most accurately, the truly horrible food were all familiar.

So too were the moments when a character could shed the unhealthy coping mechanism, even if it was only moments before realizing how hard and scary the world is and rushing back to the safety of a bad habit. This was beautifully and painfully well done by Erin Hepler as Nulla. She made my heart ache for Nulla. Hepler shows Nulla's extraordinarily bizarre way to face a world full of disappointment and hurt, and shows that Nulla knows it was extraordinary and even not ideal, and yet can't resist returning to the safety of that coping mechanism.

I was also impressed by Mike Manolakes as Professor Inais, who essentially played three distinct characters. His ability to take on different affects (not to mention accents) seamlessly made his particular mental trap, while silly, feel true. True to the professor at least.

This production is also fascinating for the acting done off stage. There are a number of times when the stage, and by proxy, Paradise Found Care Home, are made bigger by conversations held in full earshot of the audience off stage. This was taken to the next level by Jessica Spenny as Phanta, who interacts with everyone on stage from off stage. Her timing and inflection was informed only by what she was hearing. The cues that can make an actor become a character were literally blocked from Spenny's view. She lands both jokes and tender moments, her acting limited to what she could do with her voice. Credit must also be given to Hepler for her ability to interact with a character she couldn't directly act with.

It was wonderful to watch a small group of actors playing very odd and very ill people create a world that was believable. Without a solid cast that trusted each other, it would have felt like a cruel portrayal of broken people. Instead, there is a real love that the actors create for the characters. This was helped by the beautiful set that felt very much homey and not at all like a home. ■