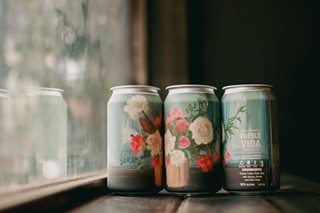 It’s the day over which hop fans like myself swoon. By the time this newspaper hits the streets, we’ll be about a week away from National IPA Day on August 5.

This day dedicated to the glory of hop flowers, celebrated by craft beer enthusiasts on the first Thursday of every August, is a reaffirmation that the market is robust for those who prefer their brews on the bitter and slightly more spirituous sides. However, with sours and other styles of beers trending upward over the past year, I’ve wondered what the future holds for my beloved India Pale Ale.

Encouragingly, after sitting down with local brewery executive Linette Antillon, I’ve learned that the spirit of National IPA Day guides her team’s work throughout the calendar year.

“We brew many different styles of beers, but we really love to brew the kinds of beers that we really love to drink, and mostly those are IPAs,” said Antillon, co-owner of Pueblo Vida Brewing Company, 115 E. Broadway Boulevard. “We love to play with the nuances of hops, and IPAs lend us that creative ability to showcase and blend certain varieties.”

Since Pueblo Vida opened their doors in 2014, a full 70 percent of the beer they’ve sold is in the IPA category. And with my sneak peek at what they’re preparing to roll out, I’d expect that number to flirt with 95 percent on August 5.

To get ready for the big day, Antillon’s team is brewing four special IPAs, three of which are infused with ingredients to balance the bitterness with sweet notes.

The Melon Creamsicle IPA is a fruity expression of their signature Cereus IPA, made with Strata, Citra, and Mosaic hops. “All of our infusions are made with fresh ingredients, so I imagine that we’ll be chopping of fresh honeydew melons and using either coconut or vanilla beans in this one.” This beer presents at an approachable 6 percent on the Alcohol By Volume (ABV) scale.

A Strawberry Limeade Benthos IPA will also be on tap, featuring Idaho 7, Amarillo, and Simcoe hops. Fresh strawberries and lime juice will come together with the tri-hop blend to deliver a kicked-up version of this classic summertime refresher with an ABV of 6.5 percent.

National IPA Day wouldn’t be complete without a selection or two that punch the palate in more powerful ways, and two of the day’s releases will exceed that expectation.

Weighing in at an ABV of 8 percent, the Dynamic Double IPA starts with Nelson, Citra, and Ella hops. It’s then infused with pineapple and other fresh ingredients that Antillon says will trigger “thoughts of pineapple upside down cake.” Sounds like my kind of dessert!

The last beer in the celebratory lineup is certainly not for beginners. It’s a triple IPA, with a mighty ABV of 10 percent, that’s intentionally named Still Life. Strata, Citra, and Galaxy hops will all come together to deliver a high-voltage, beer-sipping moment that you’ll not soon forget.

Whatever your plan is for National IPA Day, either at a local taproom or in the comforts of home, please enjoy it responsibly and save some of that swoon for next year.

Contact Matt Russell, whose day job is CEO of Russell Public Communications, at mrussell@russellpublic.com. Russell is also the publisher of OnTheMenuLive.com as well as the host of the Friday Weekend Watch segment on the “Buckmaster Show on KVOI 1030 AM.