At one point during its journey to the screen, the people at Disney halted production on The Lone Ranger because it was costing too much and they weren't sure a Western-themed summer tent-pole movie was a good idea. Then, they caved into the likes of Johnny Depp and director Gore Verbinski, producing it for a reported $225 million.

This will now go down as a huge, massive, hilarious, unthinkable, crazy, job-killing blunder. The people who had the good sense to initially halt production should've stuck to their guns.

What a misguided, uncomfortable, sickening clown act of a movie this is. Johnny Depp allowing himself to appear onscreen as Tonto, with his face painted to mask the fact he isn't Native American, is a travesty. His movies have been mediocre at best lately, but this goes beyond the likes of The Tourist when it comes to poor career choices. This is the stuff that cuts future paydays in half.

The movie is some sort of odd parody of The Lone Ranger, or at least it comes off that way, with strange comedic undertones and clichés exaggerated to the point of intolerability. Remember how the comedy Back to the Future: Part III paid homage to the West by exaggerating it in a semi-funny way? The Lone Ranger makes Back to the Future: Part III seem authentic in comparison.

How bad is it? The framing device for this movie has a very old Tonto telling some kid dressed as the Lone Ranger the story of how he met the masked man and their travels together. Tonto, looking like anything but a human being in tragic old-age makeup, is making a living posing as a Native American in a museum exhibit, right next to a grizzly bear.

Depp and Verbinski (Depp's Pirates of the Caribbean partner in crime) choose to play this depressing storytelling angle for laughs, with Depp mugging more than a heavily armed homeless guy in the Manhattan subway. Depp wears a dead crow on his head throughout the film, with his face covered in war paint in the flashbacks. He takes some sort of odd, Buster Keaton physical approach to the role that makes him look desperate, lost, and straining for the laughs that don't come. His line deliveries are stilted and unimaginative.

It represents a career low for a guy capable of great things. It's a bad career move reminiscent of such travesties as John Travolta in Battlefield Earth, Louis Gosset Jr. in Enemy Mine and Sylvester Stallone in Judge Dredd. It's a choice that will haunt him for the rest of his career.

As for the Lone Ranger himself, Armie Hammer doesn't seem to know what movie he is in. He sports an inconsistent Western movie accent and plays the virtuous John Reid as a stooge to Tonto's voice of reason. He is in no way prepared to handle a role of this magnitude. As the title character, he makes no impression, and is second fiddle to the top-billed, masquerading Depp.

Depp and Hammer aren't even close to being the worst things about this movie. William Fichtner, an actor I usually enjoy, is unwatchable as bad guy Butch Cavendish, a scarred, gold-toothed monster who eats the heart of the Lone Ranger's brother as he lies wounded and watching. This sort of thing is in direct contrast to the comedic, goofy nature of the rest of the film.

OK, you are going for something dark with Cavendish, but watching him wipe the blood of a still-beating heart from his lips is a bit much. It's the sort of thing that leaves you too aghast to laugh the next time Depp makes one of his stupid funny faces. When Depp mugged shortly thereafter, I was thinking "Yeah, well, I just saw a man die in a fashion that made that moment where the priest pulled a heart out of somebody in the Indiana Jones movie look like Mary Poppins. Laughter isn't leaving my face for a while, Johnny. Sorry."

Everything in this movie is taken too far, from the dirt makeup to the crazy beards and chops to the caricature accents. Even the sound of a kid eating a peanut is turned up to an extent that becomes gut-churning and abrasive.

Those of you who read my column know that I often complain about PG-13 horror movies that should just go for the R and turn up the dread and gore factor. Well, I get even more annoyed by PG-13 movies marketed to kids and families that contain the kind of violence on display in this crap. Heart-eating, horse-trampling, multiple gunshots, stabbings and the threat of sticking a duck's foot up somebody's ass should not be on the viewing agenda for the entire family.

Disney is going to take a major bath on this one. And, as for the summer movie season, it's another major blockbuster disappointment after misfires like Man of Steel, World War Z, The Hangover Part III and After Earth. This is officially turning into a summer of wasteful, total-trash movies.

I was truly embarrassed for Depp while watching The Lone Ranger. The mere idea that what he was putting up on the screen is entertaining or useful in any way seems ludicrous. Remember when he was a boutique movie star, before Jack Sparrow, an actor who chose interesting and scintillating projects like Cry-Baby and Ed Wood?

Depp has more money than God now, so I'm hoping he has some indie films in his future.

The Lone Ranger is not showing in any theaters in the area. 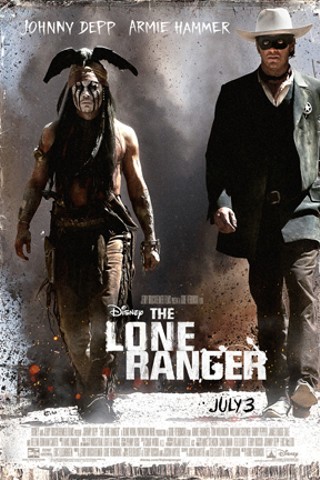