Wine Winners: Off the Vine Presses Back into Oro Valley 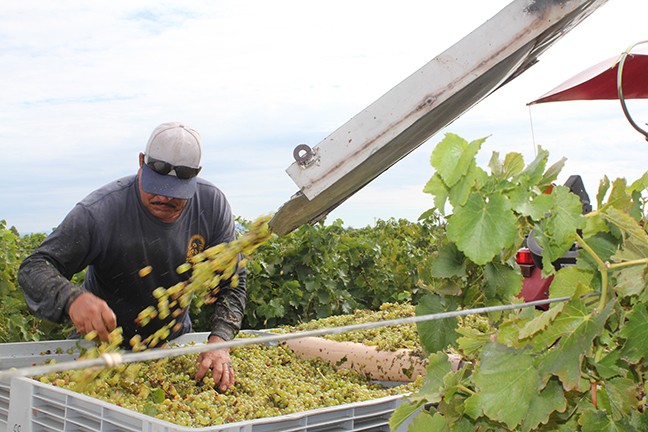 Lee Allen
Pillsbury Wine Company is one of several setting up shop in Oro Valley for next weekend’s Off the Vine festival.

Three regions in Arizona grow grapes for wine, two of them in the southeast portion of the state (Willcox and Sonoita-Elgin) with the third being a 35-mile-long region in Verde Valley. All are receiving statewide, regional and national recognition.

The last official USDA survey, sponsored by the Arizona Wine Growers Association, is now five years old, but even back in 2014 the first set of comprehensive statistics showed statewide production was already totaling well over $2 million in the thousand or so acres then being planted with the top five varieties being Cabernet Sauvignon, Syrah, Grenache, Zinfandel and Merlot.

Rod Keeling of Keeling Schaefer Vineyards was the newly-elected president of the wine grower group back then, and the Arizona Farm Bureau said he was on a mission of "establishing a more defined wine brand for Arizona (with) focus on quality and authenticity."

Although the oldest of Arizona's three wine focal points centers around the rolling hills of Sonoita/Elgin, designated as an American Viticultural Area, the big wine whoop-de-doo of the year, the 10th annual Arizona Wine Growers Association Grand Wine Festival, took place in Phoenix on Jan. 26 and 27 with representation by 32 wineries pouring over 250 different wines.

That event was preceded by the sold-out Grand Wine Gala, where winners were recognized in competition for the Academy Awards of Arizona wines.

"This is the biggest celebration of Arizona wine in the state and this year marked a record number of both wineries in attendance and the number of wines being poured," said former Wine Growers Association President Brian Predmore.

Current President Barb Coons added that given the festival's long history in the community, the association is grateful to be back for a tenth year "with a reinvigorated lineup and an opportunity to showcase our award-winning wines with some of the most dynamic personalities in the industry."

Some wines earned such high marks that a new class of medal was introduced—Double Gold—with seven wines earning that distinction this year including the overall best-in-show winner, Dos Cabezas Wineworks of Sonoita with their Aguileon 2015.

Not to be totally outdone by the larger metro valley crowd, Southern Arizona now takes center stage with its sixth annual Off the Vine Festival at Steam Pump Ranch Saturday, Feb. 16, with 25 vineyards/wineries showing up to pour.

Among those in attendance will be Alcantara Vineyards and Winery, one of the largest vineyards in central and northern Arizona's wine country, as well as Pillsbury Wine Company, producers of 16 Cochise wines out of Willcox Bench Winery, and Golden Rule Vineyards in Cochise.

Barb and Bob Predmore of Alcantara maintain 13,000 vines producing 12 varietals on an 87-acre tract surrounded on three sides by the Verde River while American-born-and-New-Zealand-raised Sam Pillsbury staked claim to 100 Willcox acres where he concentrates mostly on Rhone blends.

"Our 2018 harvest was a dream," Bob said. "Monsoon rains cooled the vineyard early, followed by two to four-inch snowfalls that the vines love. All the wines are now barreled and indications are that our 90 tons of fruit will prove to be the best harvest ever."

One of the newer regional players, Dark Sky Vineyards in Willcox, will pour right before Kim and Phil Asmundson have to go to work pruning their 15,000 vines for the new season.

"Our 2018 harvest was challenging as it was intentionally started, then stalled, then started again in order to manipulate vine water uptake to produce berries with greater phenolic development," Phil said. "Early tasting of the 2018 fruits has been exceptional, so we're excited to see how the wine develops."

And you'll go nuts (they also grow pistachios to go with their wine) for the yields at Golden Yule Vineyards, nestled on the slopes of the Gunnison Mountains in Dragoon where Jim and Ruth Graham have grown grapes since 2007.

"We'll be featuring recently-released 2016 varietals including Syrah, Petit Verdot, Sangiovese, and Cabernet Franc, wines that have already received recognition in competitions this past winter, in particular, the Syrah that has received Double Gold and Best in Class honors," said Jim Graham, indicating more good news may be forthcoming, as their 2018 grape harvest "was one of our best for both quality and quantity."

Not only will the skill and dexterity of Arizona's growers and vintners be on display, so, too, will a byproduct of their creativity—those old oaken wine barrels. Eagle Eye Barrels of Camp Verde will be showing the rustic elegance of those retired and repurposed barrels as crafted by owner Kenny New.

"What was once an oak tree that got modified by a coopers hands into a storage container for red wine and ultimately infused by its color during the process, now gets another life, repurposed into furniture and décor—each piece completely unique because each barrel retains the wine's natural dyes differently," New said.

Showing his master craftsman side, New handcrafts his furniture to order. And there's still time for some whimsy with backyard patio placards that read: "Swirl Sip Savor", "Drinks Well With Others", and "Love the Wine Your With."