Where the Wild Things Are

There's a genuine feeling of being transported to another world when the beasts of Maurice Sendak's Where the Wild Things Are show up in Spike Jonze's adaptation of the beloved children's book. After four years of filming and all kinds of delays, the gifted director has managed to put something on screen that resembles nothing like I've ever seen before. What he's made here is something wonderful ... just wonderful.

Max (the amazing Max Records) is a bit of a rambunctious child. His father is gone, and he lives with his sweet mother (Catherine Keener), who is trying to raise two kids while working a stressful job and dating a new boyfriend (Mark Ruffalo, in a brief but affecting appearance). After a particularly trying day where his igloo is demolished, his sister ignores him and jealousy for the new boyfriend boils over, Max acts up and runs away. Clad in his favorite wolf costume, he somehow finds a sailboat, boards it and starts his journey.

Max's ability to tell a good story explains how his journey is probably taking place in his own mind, but Jonze and co-screenwriter Dave Eggers never establish whether the film's happenings are supernatural or just occurring in Max's head. Things just sort of happen, and that's part of the film's magic. In a child's imagination, the area behind some fence on your block could very well contain a harbor with a boat that would transport you to a land of simultaneously lovable and fierce beasts.

The beasts are giant furry creatures that possess many of Max's own emotional and behavioral characteristics. Carol (masterfully voiced by James Gandolfini) is the group leader, a confused monster looking for acceptance and prone to violent mood swings. When he and his band of beasts encounter Max, they instantly declare him their king and follow his orders to create forts and engage in dirt fights.

As with his real home life, the land of the beasts has its share of troubles and turmoil. KW (voice of Lauren Ambrose) really likes Carol, but still wants to make new friends. Alexander (hilariously voiced by Paul Dano) is the smallest of the group, and constantly worries that nobody hears him. Judith (voice of Catherine O'Hara) is prone to saying and doing things that are a bit cruel, but really doesn't want to hurt anyone. When Max realizes that he's just a kid, and probably not suited for the job of king, he resolves to return home, where his loving mom awaits with soup and cake.

On a technical level, the movie is a wondrous achievement. Jonze had originally intended to film exclusively with animatronic puppets by Jim Henson's Creature Shop, but technical difficulties resulted in a combination of puppetry and CGI. The results are seamless, and always convincing. Karen O (of musical group Yeah Yeah Yeahs) and Carter Burwell have put together a lively, quirky soundtrack that deserves award consideration. Many of the songs are major smile inducers.

Jonze combines naturalistic locations and handheld cameras that contribute to a sense of realism, yet the film also maintains a dreamlike quality. There's nothing said in the beast world that couldn't be said by a 10-year-old (no "big" words), contributing to the notion that the world is a product of Max's storytelling. The movie is told from the perspective of a young boy and we see and feel the way a young boy would perceive the universe. At one moment, you're on top of the world laughing your head off, and the next you are crying, buried beneath mounds of snow or worried that the sun might die.

It's because Jonze doesn't skimp on things such as despair and fear that the film doesn't qualify as your typical kids' movie. It's a movie that will have your children asking questions about life, and it might even freak the younger ones out. It's more a film for adults about being a kid than a movie for kids, so if you take the children be prepared for a different kind of matinee experience.

Where the Wild Things Are is not showing in any theaters in the area.

Speaking of Where The Wild Things Are

In Case You Missed It, Google Made This Spectacular Animation in Honor of Maurice Sendak's 85th Birthday 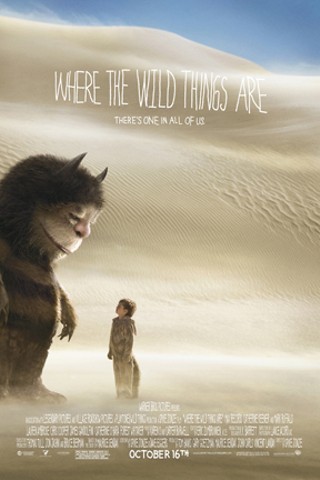