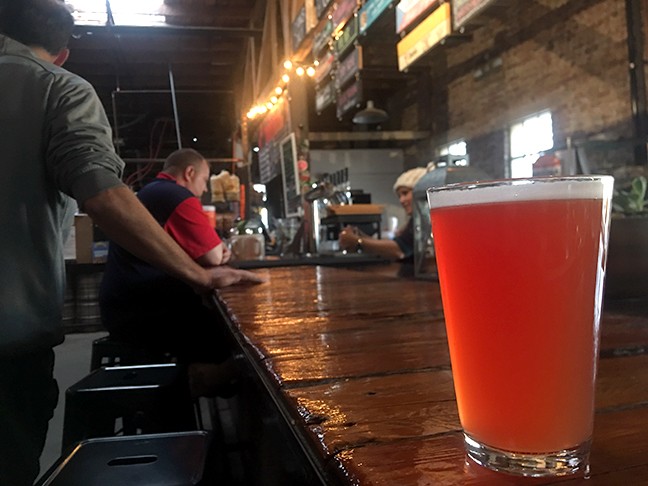 Chandler Donald
The Prickly Pear Wheat at Borderlands Brewing Company has a rosy red hue and a light, bready flavor highlighted by the crisp sweetness of prickly pear.

What may seem like a land plagued by arid lifelessness where only wiry shrubs, starved animals and threatening cacti can survive is deceivingly plentiful in wild foods and flavors, many of which are making their way into the local craft brewing scene.

From prickly pear to mesquite, the wild flavors of the Sonoran Desert can accent beer in a novel and delicious way that is uniquely Arizonan.

One of the more popular desert brews in Southern Arizona is the Prickly Pear Wheat from Borderlands Brewing Company in Tucson. Borderlands President Mike Mallozzi said the attraction to native ingredients comes from a growing desire to know exactly from where your food and drink comes.

"From a business point of view, a sense of place is necessary to be successful," Mallozzi said. "You can't replicate authenticity."

With prickly pear from Cheri's Desert Harvest, the team at Borderlands incorporates the crisp, almost melon-like flavor of the cactus fruit with the classic breadiness of a traditional wheat ale.

Mallozzi said another result of using native ingredients is a more sustainable product. The product doesn't have to travel very far before it's added to your beer.

Aside from the beautiful flavors of the beer and the aspect of sustainability, using native ingredients can help build a sense of community.

"I see breweries as community gathering places," he said. "They're egalitarian, welcoming. And beer tends to make things easier, socially."

Laura Cortelyou, tourism and hospitality manager for the Town of Marana and foraging enthusiast, said the wild foods of Arizona are vastly superior and abundant compared to anywhere else in the west, but utilizing them can sometimes be a challenge.

"They're really hard," Cortelyou said. "They're not predictable, it's not like you can have a garden that you can check on every day."

Cortelyou said incorporating wild ingredients into a menu is a challenge, especially for restaurants, because the foods you can eat are very seasonal. Some can only be harvested for a month or two out of the year.

However, Cortelyou said breweries might be the perfect place for wild ingredients because their business relies on milling and fermentation processes that stretch the life of the ingredients. She said some of her favorite wild Sonoran foods include prickly pear, mesquite, nopales, barrel cactus fruit, tepary beans and hackberries.

Cortelyou said there has also been a renewed interest in the use of wild foods nationally.

"With food trends, it's always a matter of taste and taste is always changing," she said. "I hope that it becomes a permanent thing; we should always eat the foods that grow here naturally."

Hank Rowe, brewhouse manager at Catalina Brewing Company in Marana and a third-generation Arizonan, said he's always been interested in wild food. Rowe said as a kid, he and his friends would spend their days riding their bikes through the desert.

"Our summer candy was mesquite pods; we would suck on them for the sweetness," Rowe said. "It's not that [wild ingredients] will stick around, it's always been here."

Catalina Brewery offers a few brews utilizing native ingredients. One of the brewery's most popular beers, and its flagship product, is the Mesquite Agave red ale. Rowe said mesquite is an ingredient many breweries try to utilize and fail, but his lifetime of experience enjoying mesquite left him with the knowhow to treat the ingredient properly.

"We found a recipe where I took ground mesquite pods and what we found were really unique flavors," Rowe said. "It just has the unique flavor of the Southwest."

The touch of agave nectar in brew highlights the honey-like sweetness of the mesquite, resulting in a light, refreshing ale.

Borderlands and Catalina are not alone in the use of wild ingredients. Iron John's Brewing Company and Button Brewhouse are just a few other breweries in Southern Arizona using native ingredients.

In 2015, Tucson was named Unesco's first World City of Gastronomy in North America for its 11,000-year history of cultivating native foods. The breweries in Southern Arizona aim to exemplify the celebrated gastronomic legacy unique to the Sonoran Desert.