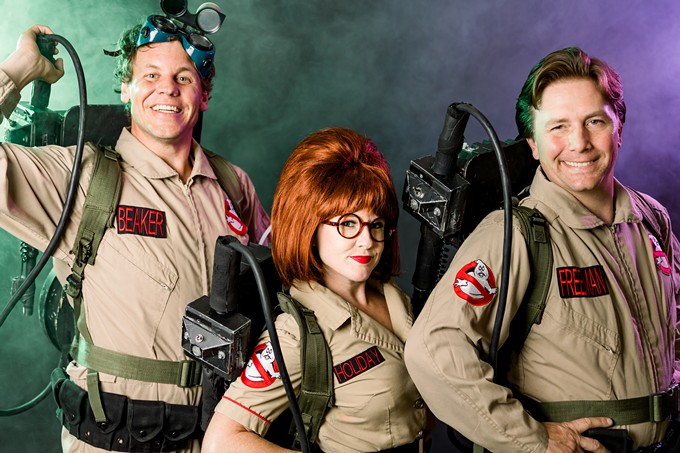 Villainous vapors don’t stand a chance against the sagacious, singing scientists of Gaslight theater’s Ghostblasters. They have light sabers!

The production, and it’s Friends-themed olio, run through Sunday, Aug. 28, with shows at 7:30 p.m. Thursday; 6 and 8:30 p.m. Friday and Saturday; and 3 and 6 p.m., Sunday. Tickets are from $17 for a seat with a restricted view to $27 for a seat in the front row. Make reservations and find details at thegaslighttheatre.com.

Ghostblasters opens with a group of misfit scientists mustering to take on a pack of pernicious ghosts in New York City. Someone has to do it. The gang teams up but finds its first hurdle in naming themselves. Next they discover that it isn’t clear who is the real threat to the metropolis. Hint: It’s not all about ectoplasm, but, shocker, it soon involves a train, a damsel in distress, and a villain soaring through the heights of the theater’s ceiling. Armed light sabers with light sabers, the Ghostblasters and their marks wreak havoc, complicating the chase with shifting identities. Who is the mayor, really? Who will prevail? There’s more than ectoplasm at stake.

Gaslight always puts on a great show, with wall-to-wall action and effects to entertain all ages. The theater also has an extensive menu of snacks and beverages, including alcohol.

Steven Wright’s laconic delivery belies the whimsically detailed thought he endows to aspects of daily life that we routinely ignore. Who even has bandwidth to examine all the quirks and lint-sized gordian knots we navigate daily? Maybe we should be grateful to Wright for being that guy, the one who pays attention so we don’t have to, and then cracks us up about what we might call the “ridiculum” beyond our focus.

When he came to town in 2018, we spoke about one of his favorite authors, Charles Bukowski. He seemed puzzled and asked how he and Bukowski wound up in the same thought. I answered that I sensed a similar energy. I was thinking that Bukowski’s brusque, cryptic written voice might be a flimsy cover for an overwhelming burden of intelligent rage. Wright’s response was a feather-light, haiku-like joke about the attitude of a butterfly. If he were a band, he might be Parquet Courts, brilliantly inscrutable, but a whole lot of fun.

Wright delivers dry jokes in brittle strips. They can make a listener think twice, but sometimes also wonder if he’s awake. He knows his affect is deeply mellow, but he says he’s always wired, and has the coffee habit to prove it. Still, the efficiency of his jokes and the drowsiness of his delivery sometimes make it seem that he’s conserving energy. Then he delivers an hour of his snippets and we might start thinking that other comics’ lead ins, punchlines and extra beats may be wasting our time.

Your Crazy Best Friends: What Are They Thinking?

Six of the funniest nutcases we know let you in on the secrets to their comedy success: Childhood trauma, chemical imbalance and assorted other mental health maladies might have laid the rest of us low, but they have failed to stifle these folks’ self-aware sense of humor.

We literally can’t imagine how they see the world, but they promise to “normalize and humorize mental health in a real and relatable way!” We are totally there for it. Allana Erickson, sketch-comedy producer, improviser and standup comedian, heads a bill including Anthony Jenkins, Ly Johnson, Morgan and Phoenix comic Can Medina. Bianca Marie hosts.

Funny at The Fox

The Fox Tucson Theatre, 17 W. Congress St., has opened its fall and winter comedy series for advance ticket sales foxtucson.com. The series includes Fortune Feimster’s “Hey, Y’all” show, rescheduled from June 24 to Sunday, Sept. 11, but it begins on August 6 with The Drive (KDRI) Tucson’s Third Anniversary show featuring Jeff Allen on his 2.0 tour. On Friday, September 30, Tucson favorite Lewis Black presents “Off the Rails”. Thursday, October 15 features “False Negative”: An Evening with John Waters, who will be in Tucson for The Loft Film Festival. Fox’s 2022 comedy programing winds up with Brian Regan on Tuesday, November 20, but The Smothers Brothers are already booked for Wednesday, January 18, 2022.

THE REST OF THE WEEKEND