When the Moon Comes to Oracle

Art gets lit at GLOW, a wonderland of illuminated outdoor art and music 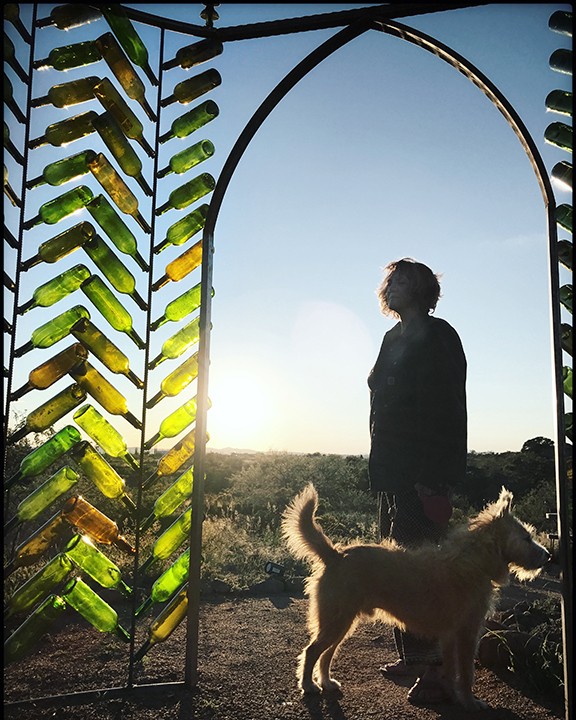 Patricia Katchur
Sharon Holnback and her dog, Roscoe, at the Crystal Castle Installation created for 2018 GLOW!

7 to 11 p.m., on four Saturdays, Sept. 14 and 21, and Oct. 5 and 12.
Triangle L Ranch, 2805 North Triangle L Ranch Rd., Oracle, AZ, 85623
Parking available on the ranch property
$20 a person; $10 discount per car for carpools of four or more people.
Visitors are encouraged to buy tickets online at trianglelranch.com/glow. Remaining tickets will be sold at entrance. Tickets are limited to 500 people each night.
Ticket covers art viewing on the lighted trails and in the Adobe barn gallery, and all musical performances. Food and beverages for purchase. Costumes welcome. No pets allowed. GLOW will go on rain or shine.
520-623-6732; trianglelranch.com

Drive up to Oracle by moonlight—and you should—and you'll get a gorgeous view of the north side of the Catalinas under a twilit sky.

And if you go to the historic Triangle L Ranch outside Oracle, you'll see acres and acres of prime Sonoran Desert lit up as bright as any moonbeam.

GLOW: A Nighttime Art Experience, the brainchild of artist and ranch owner Sharon Holnback, annually transforms the Triangle L into a luminous arts wonderland. Keyed into the full moon, which this month rises this Saturday—the first night of GLOW—the outdoor festival celebrates arts of all kinds, from sculpture to music to performance art, all of it lit by the silvery moon.

"The reason I bought the ranch 18 years ago was to make a creative haven for the arts," Holnback says, then adds with a chuckle. "There's no turning back now."

The ranch spreads out over 50 acres of lush desert and Holnback has designated 10 of those acres as a permanent sculpture park. A barn has been converted into the Adobe gallery, and there's plenty of room nearby for the Barnyard Stage where musicians perform.

This year over 100 artists are participating in GLOW, now in its 15th year. Among them are beloved Tucson musician Mitzi Cowell and her band and well-known visual artists Simon Donovan and Joy Fox McGrew.

The 10 art acres are laced with walking trails and during GLOW visitors walk them to watch mini-"performances on the path" and to see dozens of sculptures, illuminated by colored lights, spotlights, twinkle lights.

This year, a multitude of sculptors—53 and counting—have made works in metal, plaster, wood, glass and more. Some sculptures move and spin and rustle in the breeze, while others stand as steadfastly as the little tin soldier. The only common denominators are illumination and size—these pieces are bigly.

Holnback herself last year designed a giant "Emerald Crystal Palace" out of 700 wine bottles, and it's now permanently set among the trails at the top of a hill. (Volunteers, including Troy Letwak, helped with the assembly.) Artfully arranged in diagonals and fastened to an airy network of metal supports, the bottles stand up against the sky, their green glass gleaming in the moonlight.

Tucson's Simon Donavan, co-creator of "Unity," a Grant Road sculpture of dancers in a circle, has permanently endowed the ranch with no fewer than 15, 8-foot tall human figures. Made of Styrofoam and plaster, these figures are leftover forms used in the creation of a public art piece now in New Orleans. Now they seem to cavort in the sculpture park, holding hands and standing on each others' shoulders.

For sculptures that move, check out a 14-foot interactive pinwheel crafted by Michael "Oaks" Wright of Phoenix, a regular at Burning Man (no surprises there). His oversize pinwheel will spin its lights out into the darkness.

Wesley Smith favors propellers. Back home in Marana, Smith has a yard full of large metal sculptures, Holnback reports. For Glow, he's constructed a 9-foot-tall zeppelin with intricate—and moving—propellers. Tucson's Creative Machine shop contributes a ball made of gears and projects a 50-foot beam of light aimed at the ground.

Joy Fox McGrew, a founding member of Rancho Linda Vista in nearby Oracle, fashioned a place of respite. Her piece, "Fox's Gardens," clay lanterns and totems, and a ceramic table and benches where GLOW walkers can take a rest.

"With all the negative things in the world right now," Holnback says, "GLOW might seem frivolous, but it's really positive and magical. It's an opportunity to be out in nature. The desert is beautiful. The light is beautiful. We all deserve to witness some joyful art and music."

GLOW takes place on four Saturday nights, each with a different theme that Holnback hopes will inspire visitors to wear costumes and compete in a costume contest. And while the visual art will be the same each of the four nights, the performances will differ. Performances on the Paths take place on the trails 7 to 9 p.m.; headliner bands perform in the Barnyard Stage 9 to 11 p.m.