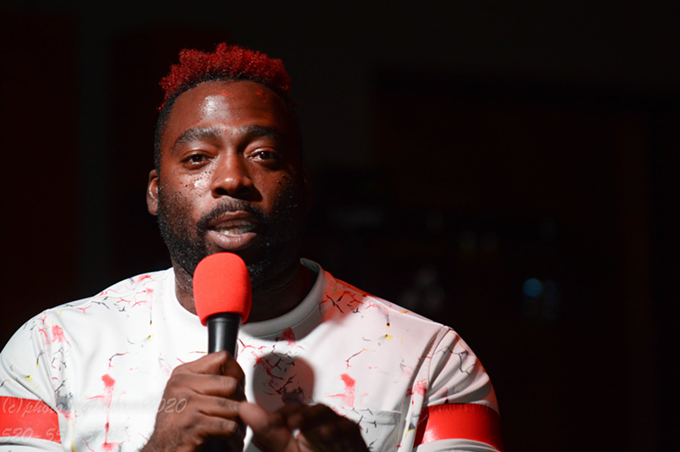 Just a Dab Graves’ production debut features Southern Arizona’s top comic Kristine Levine, cohost of The Frank Show on KLPX. Dubbed “A Dab of Comedy”, the show starts at 7 p.m. May 28 at 420-friendly Harambe Café and Social Club. Tickets are $20 which includes a choice of medicated drinks and dabs, or $50 for all that plus sofa seating and a goodie bag of products from the venue’s vendors.

Asked who most inspired him to grow as a comic and a producer, Graves recalls Tucson OG comic Pauly Casillas and an open mic Casillas ran for a few years at Mr. Heads. Graves says he gained experience there, both bad and good. “Overall, it was so good because nobody was there to hear comedy. They were there to hang out with their friends and catch drink specials.

“But it would really let you see if you had something. You could feel it because you’d hear the blah blah until you said one thing and they’d get quiet, then a little more quiet and then you would just hear yourself, and you’re like ‘Oh my God! If I’m able to get you to hear me, I love that feeling!’ Then there’s the other end where it’s like, ‘Okay, I’ve been up here for five minutes and it feels like 20 and they’re just not feelin’ it tonight.’”

Graves says being a comedian was something of a hindrance to his previous efforts to produce a show. “You have to change your perspective from the comedian’s point of view, worrying about your jokes, to (focusing) on the overall quality of the show.”

But his talent is also undeniable. Early on he attracted the attention and friendship of Levine when he turned up at The Mint for a series she hosted there. She called it Critical Comedy and gave notes to every comedian who performed.

Levine travels in circles to which few local comics can aspire. Originally from Portland, and a cast member of the popular TV show Portlandia, she now lives in Bisbee, where she has reconnected with longtime friend and colleague, comedian Doug Stanhope.

For the past several years she’s been best-known as Frank Brinsley‘s sidekick on The World Famous Frank Show (96.1 KLPX), where Graves has been her guest. “Kristine’s a very good friend of mine. She’s busy, but every time we speak I always learn something and it’s always fun.”

The feeling is mutual. “He’s fantastic!,” Levine says of him. “I really love his company and I love his spirit and being around him. And you wanna know something? He’s super, super funny. When we would give him stage time, he would just do all of it. He would take it all. Like he would close the show out. No problem. And, and even if he was just improvising riffing or doing crowd work, he was just so good at it.”

Levine’s praise is gold. Her own comedy is so novel, arresting and visually compelling that superfan and friend Doug Stanhope cast her in The Unbookables, a movie he produced about the lives of touring comedians.

Levine’s a miracle of razor-sharp wit and whisper-tight delivery. Her polish is a dance with the audience in a relationship she refers to as “a call and response.”

It’s that relationship that’s excited her about the Harambe show, her first since COVID lockdown. Although she did some shows on Zoom, like the rest of us she found them lacking. “It didn’t feel natural,” she says. “I’m a purist! It’s the interaction that I love and I need.”

She ultimately found a much better way to try out fresh material and get her audience fix. “My friend Doug Stanhope lives right up the street, so we were doing shows at his house—socially distant shows. Then when everybody got vaccinated, we (did) shows at his house that were only people we knew were vaccinated and were being safe staying home. So we didn’t want to get anyone sick with co-morbidities or whatever.” Then she laughs, “Most of my friends, we’re not the healthiest group of people.

“So, I think that (A Dab of Comedy) probably is my first time doing standup back on stage at all after almost two years.”

The rest of the lineup includes local veteran Dominic DiTolla, Jesus Otamendi, and host Stephanie Lyonga-Farrington. DiTolla is conservative, sports obsessed and bitingly, surprisingly funny about both. He spent the COVID-inning stretch logging 153 episodes of The Sports Experience Podcast with fellow comedian Chris Quinn. All episodes, past and future, are available on YouTube. (Attention skaters: The latest is about Tony Hawk.) Graves says DiTolla “brings it every time. He knows exactly what to do up there.”

Otamendi will balance the others’ energy with his big-hearted, softspoken and subtle comedy of life. Graves says that Otamendi “(I)s a pleasure on and off stage. He is so kind. And I’ve watched him sharpen his material. It’s great to see the growth.”

Host Lyonga-Farrington is a force of nature, set to parry the entire variety of comedy styles the rest of the evening brings. She seizes a crowd’s attention and peals out of the parking lot for the ride. An Afghanistan veteran and mother of two, she bars no holds in her own riveting set. As Graves says, “She knows how to steer a ship.”

Anthony Jenkins’ amiable, low-key demeanor belies some bedrock determination. For his production debut, he booked downtown’s biggest comedy theater venue, the 100-plus-capacity Screening Room. His show, Am I Right?, is at 8 p.m. Friday, June 3. Tickets are $5.

A Baltimore native, Jenkins first performed standup for the first time on a dare the last week of July 2021. He credits Chris Quinn, who runs an open mic and produces other shows at the Screening Room, with encouraging him and coaching him to improve his comedy along the way. But it was Otamendi who kept prodding him to try his own show.

Jenkins wanted to try something a little different. Now he thinks he’s got it figured out. “What I’ve been learning on my comedy journey is that (women) comics don’t get the respect that they deserve. (So) I have exactly three men and three women. All of them are very strong comics, all different levels of talent and expertise, all different styles.” Tucson man about the comedy scene Matt Ziemak headlines. The lineup includes Autumn Horvat, Robin Hartnett, Jr., Bianca Marie and Ly Johnson. Did he get it right? Jenkins wants an audience to let him know.

He has a good reason to believe the answer is yes, even if it may be provisionally. He is, after all, just stepping out. But he says, “The Tucson comedy scene is so much love. No matter where you go, everybody welcomes you with open, open arms. I think we are spoiled, because we can do (at least) an open mic a day and everybody doesn’t have that.”

Jenkins says he draws inspiration from his fellow Tucson comics.

“I look at my peers around me and there are so many different people here that are influential on what I do,” Jenkins says. “Jesus, watching him work and the support he gives and gets in return. He’s super quiet and super humble. He gave me the encouragement to try it. It’s not necessarily about making money. I’m doing this because I love it. I want to keep working hard, and I think I can get better.”

Jenkins, Ziemak and Horvat all turn up again in a June 4 Screening Room show headlined by San Francisco’s Ryan Goodcase. Horvat hosts and the rest of the bill includes Drake Belt, Carl Modina and Chris Quinn, who produces other shows and an open mic at The Screening Room. Titled Something to Do in … Tucson, the show is at 9 p.m. Saturday, June 4. Tickets are $10, or $7 via Eventbrite.com.

Goodcase is an unapologetic egghead, awkward and quiet. It’s an affect that signals smart comedy writing and wry delivery, but understates how much laughing will ensue.

In 2019, Goodcase became the youngest person ever to win the World Series of Comedy. He went on to score the 45th San Francisco International Comedy competition in 2021 and is now a paid regular at The Punchline in San Francisco. He’s played dozens of clubs and festivals throughout the US.

He thinks you might recognize him as the apathetic employee in a series of online commercials for Bed, Bath & Beyond.

Watch this space for a complete rundown of every open mic you can dare your friends to standup at. There is at least one for every Tucsonan.