What You Need To Know About Recreational Weed in Arizona 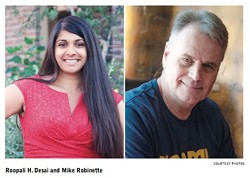 In November, 60% of Arizona residents of all political stripes voted in favor of legalizing, taxing and regulating recreational cannabis.

Since then, the election results have been verified—congratulations to President-Elect Joe Biden!—so it is now legal for adults over the age of 21 to possess, grow and consume the plant and its derivatives, although details of the laws regulating pot will not be complete for a few months.

Despite its new state-level legality, legal purchase of marijuana will not be available until at least March or April, when the first recreational sales licenses have been cleared by the Arizona Department of Health Services and your local medical marijuana dispensary becomes a dual licensee.

To find out what's happening in the interim, The Weekly consulted Mike Robinette, president of Southern Arizona National Organization for the Reform of Marijuana Laws and Roopali H. Desai, a partner at Coppersmith Brockelman, a Phoenix-based law firm that was primary author of the initiative.

Answers to our inquiries are as follows, edited for continuity.

When will it be legal to possess cannabis and cannabis products? How soon will I be able to purchase them legally?

Robinette: We're in this odd transitional period where adult-use marijuana is legal for everyone 21 years of age and older in Arizona, but there's nowhere to legally buy it. That happens in all legalized states. Right now, you can possess an ounce and you're not going to get arrested for it.

Current medical marijuana dispensaries are going to be early applicants for so-called dual licenses. AZDHS will begin accepting early applications from Jan. 19 until March 9, 2021. After that, the rumors and the scuttlebutt say that we anticipate dispensaries and adult-use sales to happen as early as April. That's a really quick turnaround from legalization in November to adult-use sales happening as early as April.

Will I be able to smoke in public? What about vaping?

Desai: What's banned is smoking in public places and open spaces. We've defined what that is to mean parks, sidewalks, public walkways, public pedestrian thoroughfares. Everything else is defined in the Smoke-Free Arizona Act. SFAA already bans smoking of tobacco. If you're going to smoke a joint, you're going to be restricted the way you already are under the SFAA. We're not going to now say you can go light up a joint in one of those places. That's not okay. Your front yard is not a public place so it's not illegal to smoke in your front yard.

How much cannabis product can I possess without a medical certification? Should I keep my medical card?

Robinette: As of Monday, Nov. 30, anyone can possess up to an ounce of marijuana on his/her person or in his or her cars, or at most 5mg of concentrates. The law decriminalizes up to 2.5 oz. so from one to 2.5 oz, or up to 12.5gm of concentrate, it's just a petty offense and you'll get a fine. The amount of that fine has not been established yet.

How can I get cannabis before it is available for sale and is it legal for someone with a medical card to give cannabis to non-cardholders?

What kind of product will be available in a recreational cannabis dispensary?

Robinette: Edibles will be limited to 100mg per pack and 10mg per serving. That doesn't mean you're limited in buying, you'll just have to buy multiple packs of 100mg versus one big one.

There is no marketing to children and packaging is restricted. You can't make a package of Mickey Mouse gummies. Businesses are restricted from using images that would market to kids. The packaging has to be such that it doesn't appeal to kids.

Will delivery of recreational marijuana products be allowed?

How much marijuana can I grow without a card?

If you're renting an apartment, you can't grow without the knowledge of your landlord. Landlords still have a right to say what you can and cannot do on their property. Don't post pictures on social media of 38 plants. Keep it legitimate. Keep what you're doing low-key and don't advertise. We fear that law enforcement, if somebody tips somebody off, it could give them reasonable cause to search and we don't want to go down that path.

Can police still arrest me for DUI if I drive after I ingest cannabis?

Robinette: The presence of metabolites in your system is no longer cause for a DUI. You must be proven impaired to the slightest degree. What that means is they can't just draw your blood and say, "Look, inactive metabolites meaning that at some point in the past two weeks you quite possibly smoked a joint and you're impaired driving." They have to prove you impaired, and that generally requires a DRE or drug recognition expert who will then do the field sobriety test to demonstrate your impairment, as well as observations of weaving or other things.

The opposition to 207 kept saying, "This is rewriting DUI laws," and that was one of their major complaints, that this would create highway mayhem. It doesn't.

When we use the words "DUI protection," it doesn't mean that we're saying we want to protect impaired driving. We don't support impaired driving. But it stands in the face of legalization if we were to say, "Hey, here's something you can consume freely and legally, but you can't really drive, because if we decide to draw your blood you're a DUI."

Additionally, the smell of burnt marijuana does not constitute a reasonable articulable suspicion of a crime. That goes a long way in preventing the roadside stops that devolve into worse things over the possibility of the scent of marijuana. That does not apply if an officer is investigating a possible DUI. Other than that, the smell of marijuana or burnt, raw marijuana does not constitute a reasonable suspicion to force a search.

Can you transport weed across state lines or on airplanes?

Desai: Nothing in Arizona law trumps federal law. People in Arizona are at risk for being federally prosecuted. It's illegal federally, it's just that the feds have said they are not enforcing federal law because all these states have decided legalization on their own turf. Any interstate travel or interstate commerce is illegal even if you can legally possess it in Arizona: Cross a border or get on an airplane and you're in the jurisdiction of the feds, and you're not going to be able to point at the Arizona law and say, "Hey, it has to be protected."

What does expungement mean? When does it start?

Robinette: Expungement will start on July 12, 2021. According to the Department of Public Safety, as of June 2020, there are 192,000 people with charges that can be expunged. It's not that you've been pardoned, it means that record is eliminated and sealed so it no longer follows you in your life: It's gone. Any conviction that has been decriminalized or made legal can be expunged. If you have a charge or a conviction that goes to 2.5oz or up to 12.5gms of concentrate, or if you have a charge of growing six plants or fewer for personal consumption, that could be expunged. You're not just thrown to the wolves: 207 has a funding stream to assist people with their expungements. There will be assistance and a mechanism for funding it.

Where do the tax dollars go? Why is there no money going to K-12 education?

The K-12 education people told us they didn't need it because they were running their own initiative, Prop 208. It wasn't like we decided we were not going to give money to K-12. There are two reasons we didn't give money to K-12. One is they said, "Don't give us money because we are working on our own initiative." They didn't want people to say, "why do we need to vote for the tax increase on rich people to pay for education when you're getting money over here from marijuana?" They did not want us to ruin their initiative and their campaign to try to get taxation to pay for public education.

The second reason is there's not enough money here to fund K-12 public education. If you committed every cent from marijuana sales to education, that would be on its best day $300 million annually. If you look at what Invest in Ed did, you're talking about revenue of $900 million to $1 billion. Experts in public education say you need $1 billion to fix our public education funding crisis.

That's what happened in Colorado: They passed marijuana legalization under this whole guise of funding public education and it was a huge devastation to the state. When they did it, they used it as a ploy to get people to vote for it and realized there wasn't enough money to actually fund public education. Then people were really upset about it. We were not just going to trick people into passing this for public education because it doesn't make a difference; it doesn't make a dent in the problem.

Then 25% is going to the Arizona Highway User Revenue Fund. We have major infrastructure problems in Arizona and those funds always get cut. This is unrelated to marijuana; it's just what needs money in Arizona.

The final 10% goes to the justice reinvestment fund. It's a lot of money that will go to restoring communities that have been ravished by and disproportionately impacted by marijuana arrests and criminalization. We'll help provide public health services, counseling, job training, all sorts of things for communities that have long suffered because of our drug policies.

People were annoyed that there was money going to law enforcement, but a huge criticism of this law was that we're creating opportunities for crime or public safety issues. We have to address that and can't ignore it.

Will AZDHS oversee the state's recreational program along with the medical program? What is the meaning of "successor agency" referred to in the text of Prop 207?

Desai: AZDHS is taking over the recreational program because of its experience with the medical program. Those programs are going to work very closely with one another, so we thought it would be terrible if you have a completely different agency overseeing one and the other. There's really no way for that consolidation, for those agencies to work together.

There was a discussion a couple of years ago in the governor's office about collapsing the DHS into the Department of Economic Security and consolidating agencies. If DHS does not exist as DHS because the governor changes the name of the agency or consolidates it with another agency or it becomes something else, it will continue to be the agency that oversees health services in Arizona. DHS cannot try to push off its obligations to some other newly formed board such as an alcohol or liquor board.