What is the Cost of Free Speech? 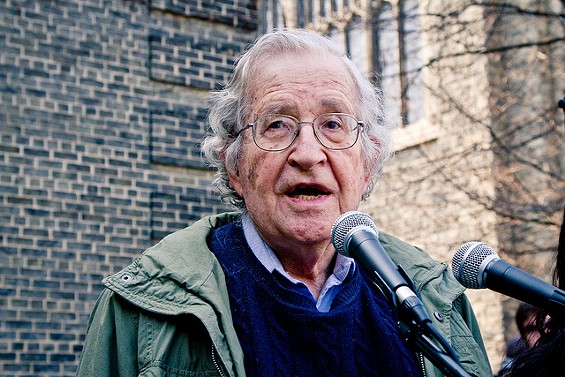 Courtesy of Andrew Rusk
Noam Chomsky is a laureate professor at the University of Arizona and a revered speaker, known for his ardent defense of free speech.
The boundaries of free speech on college campuses have become more controversial in recent years.

Nadine Strossen, former president of the American Civil Liberties Union, says colleges must be selective with who they bring as a guest speaker based on their ideas, but you can’t exclude someone just because their ideas are controversial.

Strossen cracked up the audience, at a University of Arizona discussion on free speech, when she used Donald Trump as an example.

The UA College of Social and Behavioral Sciences hosted The Haury Conversation on Campus Free Speech event on Sept. 5, at the Student Union Memorial Center. The panelists for the event included some of the most significant speakers in the country on the topic of free speech.

Noam Chomsky, a professor of linguistics and the Agnese Nelms Haury Chair, disagreed with Strossen. He believes any speaker of any topic should be permitted on campus, adding if a student group decides to hear a hateful speaker like Donald Trump, then they should hear what he has to say.

“Let’s confront him, refute it,” Chomsky said. ”Let’s find the sources from which it’s coming and let’s deal with it before it screws all of us.”

According to Kathy Adams Riester, the UA Associate Dean of Students Director, as a public university, the UA has a “marketplace of ideas” that listeners may not agree with but which honors the freedoms guaranteed under the First Amendment of the Constitution. Some of the ideas may upset people, but they should listen to the speaker respectfully.

Strossen explained that there should be “safe spaces” for students on campus, like dormitories and classrooms, and these spaces should not be for controversial speech but places of  sanctuary.
As a professor, she believes it is her responsibility to create a certain environment that is conducive to education. For example, she says a professor would have the right to say, “I'm only going to allow you to use the kind of language that would be appropriate in an argument for the United States Supreme Court.”

Sigal R. Ben-Porath, professor at the University of Pennsylvania and author of “Free Speech on Campus,” agreed with Strossen that professors and students shouldn’t have carte blanche to protest inside the classroom and agreed with Chomsky that universities shouldn’t limit or censor student groups. But she also believes in universities supporting ideas in a neutral way and expanding some of the ideas present on campus. Some people’s voices are not being heard, so universities should organize events to support other perspectives, she said.

Universities allow controversial speakers on campus, as they are subject to the First Amendment. Although the First Amendment does protect speech against government censorship, which includes hate speech, it does not protect fighting words, speech that incites or provokes violence and true threats.

Those who object to a speaker may take part in a rally against the speaker, but universities must protect First Amendment rights on campus while also protecting its students and learning environment.

In Arizona, in 2016, state lawmakers banned “free-speech zones” on public university campuses, saying that in common areas (not inside classrooms) colleges can’t limit where free speech is exercised.

Ben-Porath believes that higher education is not perfect and has various things to work on, like supporting a diversity of opinions.

“As a sector, we are doing a pretty good job supporting and perfecting the open expression of ideas,” she said.