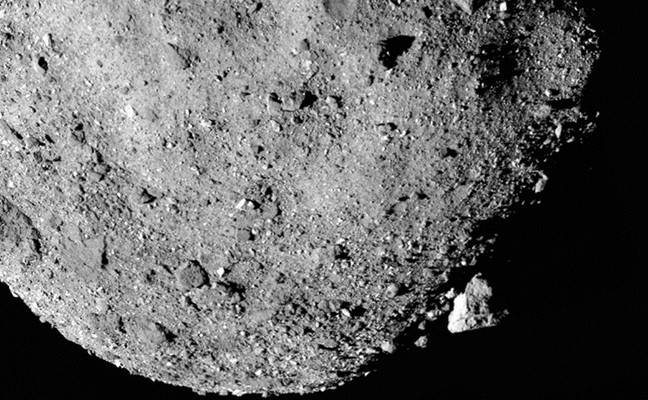 Nasa/Goddard/University of Arizona
A closeup of Bennu, showing the asteroid’s rough surface with many boulders over 30 feet long.

The asteroid Bennu contains traces of water and is far more rugged than originally predicted, according to the first new scientific data retrieved from the OSIRIS-REx space mission.

"A lot of the uncertainty has been removed about this mission," said OSIRIS-REx Principal Investigator and University of Arizona Professor of Planetary Science Dante Lauretta, who was among the UA and NASA scientists delivering the news via livestream from the fall meeting of the American Geophysical Union.

"These hydrated minerals have evidence of liquid water in Bennu's past," said Amy Simon, deputy instrument scientist for the OSIRIS-REx mission. "It's one of the things we were hoping to find.... We're super excited."

OSIRIS-REx found these minerals with spectral analysis from its OVIRS and OTES cameras. The cameras, infrared and thermal, respectively, examined the asteroid's surface prior to orbit.

"The thing to remember about both of these instruments is that they are not images, they're point spectrometers," Simon said. "So whatever spot we're looking at on the surface, we're not making an image, we're seeing the spectrum of everything in that spot."

Initial views even located a boulder on Bennu roughly 50 meters large. Lauretta described the asteroid as similar to a pile of rubble, and hypothesized it possibly came from a much larger asteroid.

"I want to emphasize, these are still the really early days of the mission," Lauretta said. "We have a lot of days of research ahead of us."

Already, with their comparatively low-quality resolution, scientists are seeing basins on Bennu's surface (which might actually be impact craters from asteroid collisions) that may prove stable enough to be sample-collection sites.

OSIRIS-REx will not be landing directly on Bennu to collect cosmic samples. Instead, the spacecraft will perform a very close flyby, and blast the asteroid with gas to knock loose rocks and dust. A robotic arm will then extend and touch Bennu for roughly five seconds to gather up to two kilograms of samples.

Only at the precipice of scientific discoveries, many years of information coming from OSIRIS-REx and Bennu are soon to follow. On the near horizon, however, is for OSIRIS-REx to fully orbit Bennu, becoming the smallest object ever orbited by a spacecraft. This is planned for New Year's Eve.

"Bennu is proving to be just the asteroid we were hoping it would be," said Jeff Grossman, OSIRIS-REx program scientist.