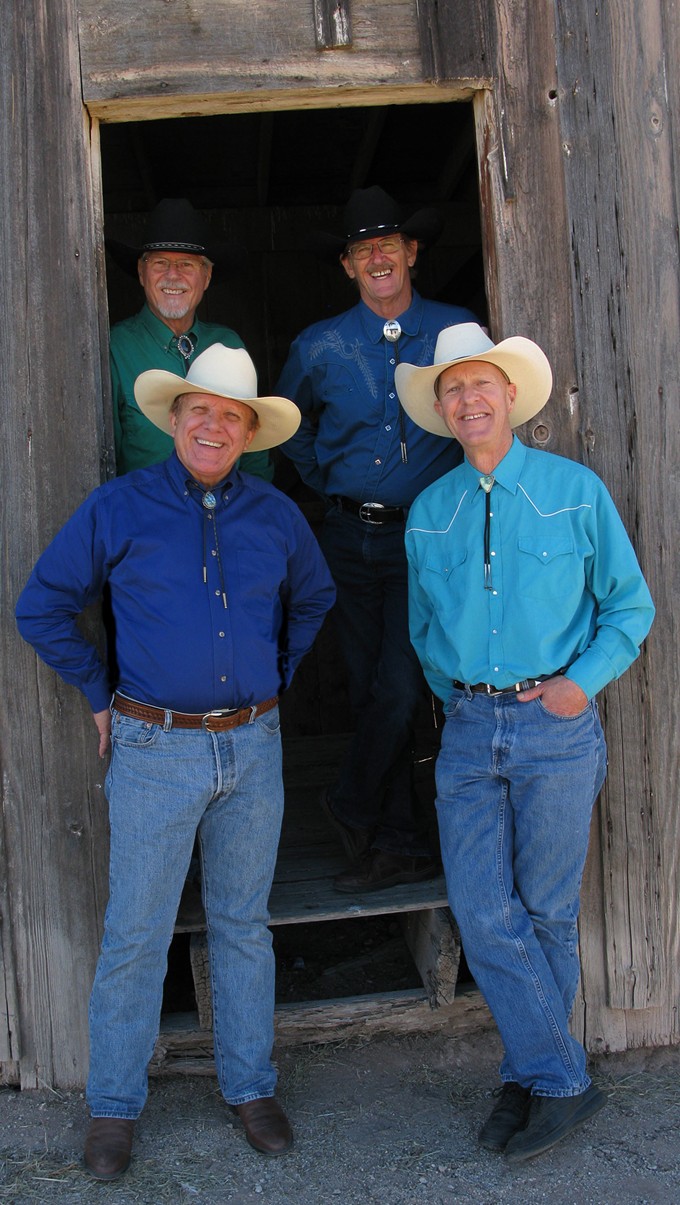 The cowboy romp—a ballet performed on point, no less—will be danced by the entire company of 32 dancers, the women dressed in checked gingham tutus and the men in jeans and cowboy shirts.

The four musicians, playing guitar, pedal steel guitar, bass and drums, will be duded out in cowboy hats and bolo ties

Even so, if you listen closely to the music of the cowboy quartet, you may hear a faint Irish lilt.

That's because a "lot of cowboy music is set to Irish tunes," says Ganz, the band's soulful lead singer.

Back in the days of the big cow drives—before the railroads put an end to them around 1880—cowboys "wrote songs out of necessity," says Ganz. "They calmed the cattle with music."

For inspiration, cowboy composers turned to the music of the Irish immigrants who were also out West, working cattle ranches and mines and laying railroad tracks.

"They used Irish and Scotch-Irish melodies," says Ganz, a local musician well-versed in the history of western music. The popular "Streets of Laredo," just for instance, is lifted almost wholesale from an older Irish tune.

"One time I played 'Laredo' at a music festival, and some Irish musicians there followed up by singing the Gaelic version," he says.

The pioneer musicians also borrowed harmonies from Mexican rancheros and mariachi songs. And in the 20th century, Tin Pan Alley put a slicker stamp on the cowboy genre.

Underlining the Irish heritage of the western music he loves, Ganz just happens to play a prized 1939 Martin guitar once owned by Paddy Walsh, an Irishman who charmed friends in Tucson with tunes from the Auld Sod on musical evenings from the 1920s to the 1960s. (See "Arizona Irish," Tucson Weekly, March 15, 2001.)

"That guitar is such a revelation," Ganz says. "It has a sound you can't get anywhere else."

This fertile musical mixing seems fitting for a concert that makes an unusual pairing between classical dance and wranglers' laments.

Ganz, who plays solo shows regularly at barbecues at the Tanque Verde and White Stallion guest ranches, notes that his band has ventured before into the domain of the "high" arts: the musicians once did a collaborative concert with Tucson Symphony Orchestra.

He's excited that the band is playing a ballet for the first time.

The new cowboy dance gets the primo berth on the Ballet Tucson program: the 20-minute piece will be the grand finale of a concert that features five other dances in a smorgasbord of styles.

Choreographer Schneider set "Saddle Up!" to six tunes he picked from the Ganz Band CDs—including the popular "Don't Fence Me In," "Ghost Riders" and "Cattle Call."

"We've been attempting to add more live music," says artistic director Cabana, pointing to the troupe's February Bernstein concert that featured two opera singers and a classical quintet. "And we've been talking about doing a western ballet for a long time."

She enlisted Schneider as choreographer for the cowboy piece because "he does a great job on dances that are more theatrical. This is right up his alley."

The movements he created include a "diagonal migration across the state" during "Tumbling Tumbleweeds" and a series of "love duets" set to "Arizona Waltz."

"It's a cute, charming, fun piece," Cabana says. "The dancers really enjoy it."

The concert opens with a reprise of Daniel Precup's "Carmen," a 45-minute ballet based on the beloved Bizet opera. The entire company dances, with prima ballerina Jenna Johnson reprising the lead role ("She's so good at it," Cabana says).

Johnson last danced Carmen in 2014, for the Tucson Desert Song Festival, with her dancing Carmen sharing the stage with a singing Carmen, a soprano belting out the opera's arias. This time around there's just one Carmen, and the music is recorded.

Part Two of the concert kicks off with the comical 10-minute "Birthday Variations," by Sam Watson, an artist in residence at UA Dance. Five women dance a mish-mash of polkas, tangos and other dances, while the familiar birthday song is sung again and again "in the style of" classical greats from Hayden to Brahms. "It's so crazy," Cabana says.

Next up is "Wolves," a work developed in the troupe's Choreolab program by company dancer Anthony Schweighardt. The contemporary dance, featuring two pas de deux, was voted top dance at a November concert showcasing the dancers' new choreography. The work touches on grief, but it's uplifting, Cabana says. "The guy has talent."

Two short classical ballets follow. The pas de deux "Spring Waters" is a Bolshoi-style pas de deux with a show-stopping torch lift. Jenna Johnson and Taylor Johnson alternate on the next piece, "The Dying Swan," a three-minute solo choreographed in 1904 for Anna Pavlova.

After this classical run, the cowboys and cowgirls put on their dance slippers and saddle up.