Director John Favreau goes nuts with Cowboys and Aliens, taking two genres (Westerns and alien-invasion films) and mashing them together. Somehow, he gets the crazy thing to work.

It doesn't hurt that Favreau populated the cast with one major talent after another. In what is surely one of the year's greater casts, the film features Harrison Ford, Daniel Craig, Sam Rockwell, Adam Beach, Olivia Wilde, Paul Dano and Keith Carradine. Not a weak link in this bunch.

It also helps that Favreau proves to be adept at both genres. The movie is a strong, fine-looking Western, and the invading aliens are dark, hostile and effectively scary creations. All in all, this film is as good as it is strange, and a welcome change of pace in a summer rife with superhero epics and sex comedies.

A dirty cowboy (Daniel Craig) wakes up in the desert with a strange metallic bracelet on his wrist, and he has no recollection of where he is, or even his name. A series of events lead him to a jail cell, where people are awaiting the arrival of a grouchy cattle baron (Ford) coming to retrieve his misbehaving son (Dano). While in the midst of a prison transfer, strange lights appear in the sky; alien laser canons start firing; and that strange metallic bracelet starts blowing things up.

The Old West is being invaded by aliens searching for gold; they also like to cut earthlings up and check out the insides. There are exciting chase scenes featuring prominent cast members getting roped and dragged into the sky by the aliens. It's a bizarre and unsettling image, and Favreau repeats it often.

The fact that Cowboys and Aliens is almost completely devoid of humor surprised me. I'm not saying this is a totally bad thing, but I did expect something a little goofier. This is a dark, somber movie in which no cast member appears safe—anybody could go at anytime. It plays out more like a horror film than it does your typical Hollywood summer blockbuster.

As for the film's nutty mash-up of genres, I will put it alongside From Dusk Till Dawn, which famously pitted a vampire plot against a crime-spree road movie. I, for one, love it when a director does something insane like this.

I'm surprised that the movie got its PG-13 rating. It contains lots of spurting blood, nasty alien kills, and one honestly horrifying torture scene. To me, it easily should be an R-rated film, and I would proceed with caution when it comes to taking the kids.

Harrison Ford is quite good as the weathered cowboy with a nasty surface, yet some heart underneath. Ford at home in a Western (so much so that he has already signed on to play an aged Wyatt Earp in one of his next films). Watching him here, I was reminded of his last Western ride back in 1979's The Frisco Kid with Gene Wilder. If you haven't seen that one, it's a pretty good comedy on top of being a fun Western. (OK ... I'm a bit off-track.)

Craig, who has the most screen time in the film, looks good standing next to Ford. I had trouble picturing him as a cowboy when his casting was announced, but he does a decent American accent and looks good in chaps.

Rockwell, one of my favorite actors, is perfection as the saloon owner grieving for his alien-abducted wife (Ana de la Reguera). Rockwell is that rare actor who can play both sinister and meek. In this one, he's flying his meek flag, although his Doc does have heroic moments. I also love that his character is named Doc. That's pure, welcome Western cliché right there.

Dano gets to play mean and reckless with his Percy, a loose cannon and badass who is shooting up the town—that is, until he takes a knee to the nuts, and he reveals the quivering, cowardly boy underneath. This is Dano's second strange Western this year, after the unorthodox Meek's Cutoff.

By the time cowboys and Indians are exchanging blows with the bug-like aliens in the finale, the movie has earned its stripes as something unique for the filmgoer who is fed up with more of the same.

Though it is enjoyable, Cowboys and Aliens is fairly disposable, and it isn't a film you will need to see more than once. Maybe it's time for Mr. Favreau to step away from the big-budget blockbusters for a stretch and get back to some smaller fare, like his wonderful Elf.

Cowboys & Aliens is not showing in any theaters in the area.

Here Is a James Bond Movie Trailer for Your Enjoyment

War and Sex in the Forest 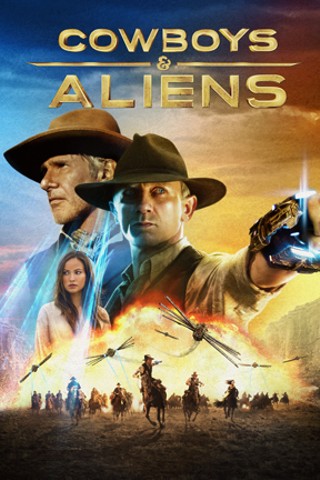