War and Sex in the Forest

It depicts the little-told story of a group of Jewish resisters who fled into the forests of Belarus and held out against Hitler for four years. Led by Tuvia Bielski and his brother, Zus Bielski, the resisters eventually hooked up with some Russians, built a small city in the forest, repeatedly fled for their lives and offed a goodly number of Nazis.

Action movies all have a central problem, in that you need to show a lot of people dying, but decent human beings are generally not favorably disposed toward murder--so it helps if the people who do the dying are inherently evil. This is hard to pull off; in most conflicts, you can at least make a case for joining either side.

The great thing about Nazis, though, is that they're pure evil. We don't even need to think of them as vaguely human; it's just totally satisfying to see Nazis get killed, and so Defiance offers a good deal of that. It's notable that American movies tend to glorify revenge. They don't just depict revenge; they make it seem really fun and worthwhile. But in order to do that, you need a scene where someone gets wronged, and then the revenge has to be directed at those who did the wronging. But with Nazis, you have a whole army of revenge-worthy foes, and every time someone wearing a swastika gets his head blown off, there's a natural urge to celebrate.

But Defiance is not entirely simplistic in its presentation of the ethics of war, at least if you watch closely. The Jewish resisters, having been reduced to living in the woods like ancient cave Jews, are low on food, so they frequently steal from semi-innocent villagers. They also capture and beat a German soldier to death. And they don't recycle. So: moral complexity.

Daniel Craig plays Tuvia Bielski, and Liev Schreiber plays Zus Bielski. When they have scenes together, the film starts to seem like a challenge sequence in an acting class, as they try to out-emote each other. While it's over the top, it's also fun, which is true of a lot of Defiance. Some of it is even accidentally comic, like the stock sequence of the wedding scene that's intercut with shots of gunplay, or the painfully heavy use of violin music. There's also a final sequence that you could see coming from about 10 million miles away in outer space. Still, there are some genuinely moving scenes, and the film would be consistently entertaining if it weren't, like most movies and penises, just a little too long.

So it seems a little unfair and excessive to keep making World War II movies. In fact, I'd go so far as to say that World War II and the Holocaust have stifled cinematic creativity in the same way that Jesus and Mary stifled artistic creativity in the late Middle Ages. I mean, I get it; there he is on the cross, and there she is weeping at his feet. There are only so many times you can paint that same picture before it stops being sad and starts to seem funny.

At least Defiance has a novel angle for its World War II tale. Plus, and this is a huge bonus, it's gorgeously shot by Eduardo Serra. The Lithuanian forests that stand in for Belarus are so pretty, it's like they were designed by Vera Wang, if she designed snow-covered forests instead of wedding gowns. Even though the area is naturally attractive, Serra deserves a lot of credit, because he has a very precise sense of framing and color composition that works to make what would normally just be naturally beautiful into something that's cinematically beautiful.

Defiance isn't really the high-art, Oscar-worthy film it's pretending to be, but if you go in with low expectations and an appreciation for dead Nazis, you'll probably enjoy a good 60 to 70 percent of it. In this age when Democrats have callously taken control of our country, and magnetism has been tamed and turned into a force for industrial power, I guess that's all we can ask.

Defiance is not showing in any theaters in the area. 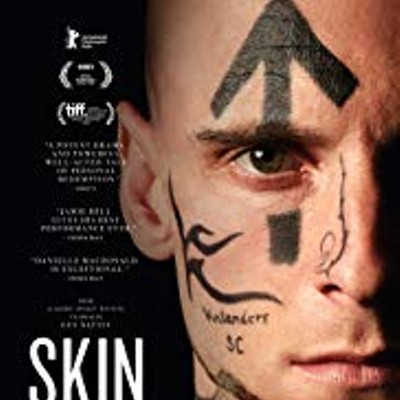 Into the Mild: Journal From a Refugee Camp: My Final Week