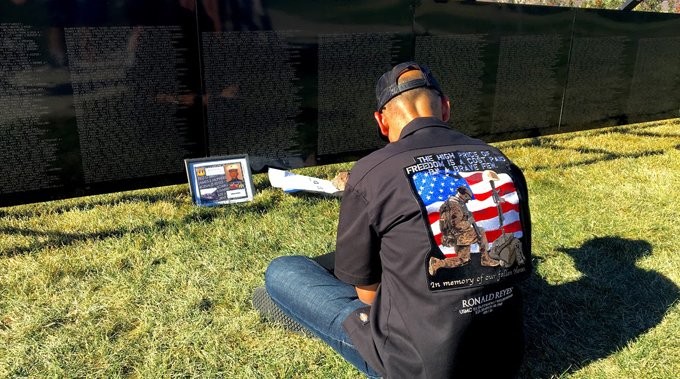 Veteran Jonathan Green not accustomed to getting emotional, and was surprised by his reaction to the Vietnam Veterans Memorial in Washington, D.C.—the first three times he visited.

"I lost it," he said. "I was overcome with emotion that I did not then and do not now understand."

A scaled replica of the Vietnam Veterans Memorial Wall will be in Oro Valley, at the Cañada del Oro Riverfront Park, from March 15 through 18. The Wall That Heals will be open 24 hours a day, and is free to visit. The Oro Valley Parks Department is working with the recently-formed nonprofit Bring the Wall, Inc., to bring the memorial to the region.

A local Vietnam veteran recently told Green, spokesman for the project, that the biggest fear he had in the war wasn't dying, it was being forgotten. Green said the Wall (and its replica) exist "to pay tribute to all of the people who gave their life."

Created by the Vietnam Veterans Memorial Fund, the nonprofit that founded the original wall in D.C., the mobile replica is 250 feet long and five feet tall at its highest point, half the size of the original. The Wall displays the names of Vietnam service members, spanning almost 20 years of war, who went missing or died in active duty.

While the names on the replica are smaller than the original, all 58,318 are there, eight of which are women—the only female nurses whose deaths were related to Vietnam combat. The average age of service members on the wall is 22, with the youngest death being a 15-year-old.

The replica was created in 1996, and has traveled to over 400 towns and cities. The Memorial Fund receives over 100 applications yearly from places that want the Wall replica to come to their community. The replica has only come to Arizona once before: Flagstaff in 2009.

"This is absolutely something that aligns with our values, and we will do what we need to accommodate," she said.

The replica is transported in a 53-foot trailer that transforms into an education center, which is also open 24 hours a day during the exhibit. The center includes photos of service members who died on each date the exhibit is being displayed. The display also includes photos of "hometown heroes," including many of the 113 service members from Pima County, whose names are on the wall.

"You see all the names, but then you see the faces," said the memorial fund's director of communications, Heidi Zimmerman. "Each of these 50,000 names has a face and has a story."

She said showing the photos of locals who died in the war creates a deep connection with the communities the replica visits, and when people see the Wall where they live, surrounded by their loved ones, it's a healing experience. Also, having a mobile Wall is especially important now that Vietnam veterans are getting older and may have a harder time traveling.

"For each of those names, there's a family and a community that was changed forever by that loss," Zimmerman said. "We need to make sure current and future generations are educated about the war and those that came before them."

The education center also displays moving items left on the Wall in D.C., such as an unopened care package marked KIA, for "killed in action."

There's also an accompanying information center, which offers assistance on finding names, as well as how to get an etching, or name rubbing, of a name from the wall in D.C., since the replica is not set up for etchings.

Local veterans groups Veterans of Foreign Wars of the U.S. (VFW), Women's VFW Auxiliary, AmVets, American Legion, Elks Lodge and Lions Club have all helped make this event happen and will have info booths set up to inform veterans about local groups they can join. The Southern Arizona Veterans First Responders Living Memorial was also invited to have a booth, and will be in attendance. There will also be counselors from Veterans Affairs to connect veterans to any health services they may need, including suicide prevention.

The Memorial Fund is charging $8,000 to come to Oro Valley, the third stop on its 38-city, six-and-a-half-month tour. Bring The Wall, Inc. has a fundraising goal of $20,500 to cover the initial fee and additional costs such as insurance, fundraising events and advertising. The nonprofit is raising money through a GoFundMe page, a golf tournament at El Conquistador Golf Course on Feb. 24 and other fundraising events.

The total cost was substantially lower than originally calculated because of the outpouring of support from the community. Oro Valley donated the use of Riverfront Park, including the use of lights and bathrooms. And when Bring The Wall reached out to local law enforcement for assistance with security, they had so many volunteers they had to turn people away.

The nonprofit will split any excess donations between the Southern Arizona Veterans First Responders Living Memorial, and another veterans' charity yet to be chosen.

Bring The Wall is still looking for another 70 volunteers to take on three-hour shifts, covering 24 hours a day, to help visitors find names and answer questions. There will be a volunteer training prior to the event.

People leave items at the replica—little flags, flowers, photos, letters—just like they do at the D.C. Wall. And when the traveling Wall moves, those items are given to the hosting organization, who sometimes create public displays with the items.

Green says the replica is a way of bringing the wall to those who can't make it to D.C. and allowing them to feel the profound, emotional experience.

"It grabs you," Green says. "It's like I've just been taken to a sacred place and didn't realize what was happening to me—it's powerful."

On March 14, a police and motorcycle escort will meet the semi-truck carrying The Wall That Heals at West Sunset Road and I-10, around 10 a.m. The parade will head to the Riverfront Park at 551 W. Lambert Lane, where 50 local first-responders will assemble the wall.

TWTH will be open to the public 24 hours a day, beginning with an opening ceremony on March 15, at 9 a.m. A guard will raise the flag every day at 9 a.m. and perform Taps every evening at 6:30 p.m. There will also be special services on March 18 at 9 a.m. The exhibit will be taken down on March 18 at 3 p.m.

To enter the fundraiser golf tournament or to be a sponsor, get a registration form by calling 401-9554 or emailing support@bringthewallaz.com. Registration is limited to 144 players, on a first-come-first-serve basis, with a Feb. 21 deadline. The cost is $85 for a single player, $340 for a foursome and $425 for a foursome with hole sponsorship.