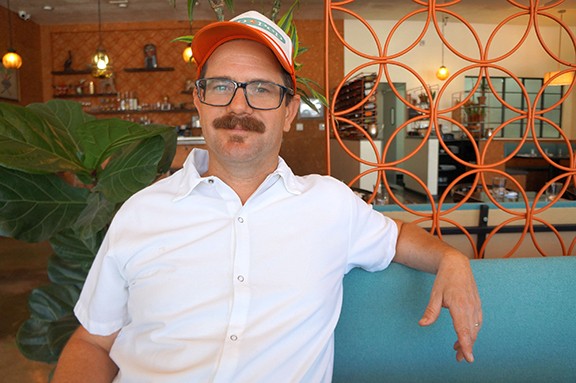 Mark Whittaker
John Martinez: “All we can do now is continue moving forward, keeping clients engaged and employees engaged. You can’t build a time machine.”

It was an absolute mess and quite the financial setback for chef and owner John Martinez, who had always dreamed of operating his own bistro in midtown Tucson. But the senseless incident didn't put an end to Martinez's dedication to serve some of the best food in town. It was merely a flesh wound.

"The funny thing about our windows being broken so soon after we opened is that the replacement glass that arrived wasn't the right shape or size," Martinez says. "With our windows all boarded up I didn't want people to think we were closed so I got an artist to come by and paint over them. It was a big lesson on what to expect when you open a restaurant on a busy street."

Luckily for Martinez, the surrounding community was very supportive, including Feast chef and owner Doug Levy, who has had his own experiences with setback vandalism. The year 2018 didn't end too well for Tito & Pep, which got its name from two characters in a passed-down family story, but 2019 had a brighter promise.

The food at Tito & Pep, a regional twist of playful refinement met with cultivated comfort, was beginning to get the attention, not just from local epicureans, but from curious taste buds abroad. Martinez, who holds a resume cooking with renown chef Jean-George Vongerichten in both New York and the Bahamas before returning to Tucson in 2013, creates an uncomplicated celebration of flavors with a slightly mischievous outlook on the approach and delivery. The interior dining space design reflects the dishes, as it too moves in retrospective color, whimsy and warmth.

With that winning combo, along with an ever-changing seasonal menu that, in Martinez's words, is completely dictated by his clients likes and dislikes, it is no wonder that Tito & Pep is a welcome (slightly) new addition to Tucson's eating options.

Then, a second calamity came crashing down. Literally.

On Labor Day weekend, a thief broke in, taking the office safe and both the house manager's and Martinez's laptops. That and—oddly enough—his dirty chef's coat and a Tito & Pep logo hat.

Martinez got a call around 6 a.m. Sunday morning from his prep cooks.

"Luckily, I live just five minutes away, so I got here pretty quick," Martinez said. "When I arrived, I noticed that the power was somehow switched off, and I immediately called 911."

Apparently, the burglar got in through an abandoned piece of duct work on the roof. A camera caught a blurry image of the suspect, but Martinez has a hunch that he wasn't working alone.

"There had to have been another person who lowered him in and through the roof," says Martinez. "And it looks as if they knew what they were doing. Not too sure if they were studying our layout or if they somehow knew the infrastructure, like an old employee of one of the previous restaurants or maybe they did some work on the roof at one point. I'm not positive but they had to have known about that entry point beforehand."

Fortunately, we live in the age of digital payments so most of Tito & Pep's receipts are through credit cards, so the thieves did not make out with too much money, even after a bustling Saturday service. The biggest loss, outside of a sense of security, was Martinez's laptop.

At first, Martinez thought a good amount of his well-honed recipes were lost but is now in the long process, through sent emails, of retrieving them. The financial hit was one thing but losing your life's work to the grubby hands of a crook is another. Still, Martinez is staying positive despite the recent trail of misfortune.

"When the police arrived on that Sunday morning, the only thing going through my head was the song 'Break My Stride' because I can't let setbacks like this break my stride," he said. "We have a job to do, we have customers to feed and keep happy. All we can do now is continue to move forward, keeping clients engaged and employees engaged. You can't build a time machine."