Walking for a Cure

The annual MS Walk is this weekend 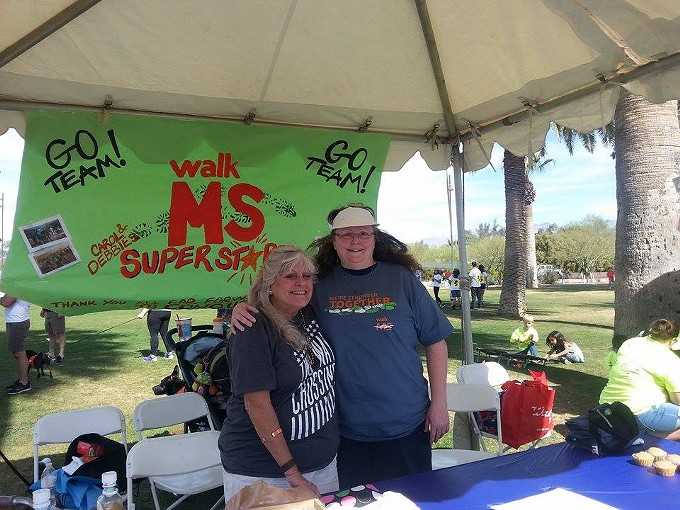 Courtesy photo
Carol Hunter and Debbie Sheehan participate in the MS Walk every year to raise money to find a cure.

Courtesy photo
Debbie Sheehan: “I have MS, but it doesn’t have me.”

Donations are tax deductible and can be made at nationalmssociety.org/Donate. Donations will be accepted for 90 days after the walk.

The Northwest Tucson Multiple Sclerosis Self-Help Group Meetings are the second Wednesday of every month, from 10 a.m. to noon, at Casas Adobes Congregational Church, 6801 N. Oracle Road. For more info, call Carol Hunter at 797-0405 or email her at hunterhi1@comcast.net. It’s an open meeting (and a lively crew). Caregivers and friends are welcome.

Debbie Sheehan was in the Air Force when she lost her vision. It was 1991 Desert Storm. She wouldn't understand what happened to her until five years later.

"I called my parents and said, 'I'm coming home, but I'm blind,'" she says, with a laugh that's allowed by insight she's acquired since being that scared 25-year-old.

MS causes nerve damage that disrupts communication between the brain and the body. The way Sheehan puts it, it's like a straw with a hole. It doesn't matter how hard you suck, you just can't get the liquid through it.

MS can last years or a lifetime and has a variety of symptoms that vary from person to person, including vision loss, pain, fatigue and impaired coordination. There are treatments to reduce or control symptoms but no known cure.

Sheehan says when she was diagnosed, it felt like a death sentence. But she's learned to cope with the disease and the importance of having a support system.

Sheehan met Carol Hunter almost 20 years ago on an MS Walk, which raises awareness and money to fund research for a cure. And about seven years ago, they started a team, to walk with and fundraise: Carol and Debbie's Superstars.

Hunter also runs a support group, Northwest Tucson Multiple Sclerosis Self-Help Group, along with her friend Cindy Lewis. The group has over 200 people on their email list, and usually 15 to 30 people show up to monthly meetings.

"However you feel today, you're gonna feel better when you leave," says Lewis, who was diagnosed with MS in 1989.

Hunter joined a support group three years after her diagnosis, in 1995. She wanted to learn more about how to deal with her symptoms. She also needed support on dealing with loss. With MS, she says, symptoms come and go. You may regain the ability to walk only to lose it again, making the grieving process a repetitive circle.

"The scariest part of the disease is not knowing day to day," she says.

In their support group, they connect with others who get that. They share coping tips and advice on doctors and treatments. And they invite speakers to talk on topics, such as traveling with MS. And most importantly, it's a reminder they're not alone.

Through support groups, Sheehan can share the scary and embarrassing moments with people who understand. If she's having a bad day, feeling like she can't make it, she has people to call who tell her, "Yes you can."

"It's nice to have a laugh with somebody who gets it," she says.

The upcoming MS walk will be Sheehan's 22nd. She and her friends have all had times where they had varied difficulty walking. She's needed a cane, a walker, a wheelchair. Currently, she can walk without any assistance.

"All three of us look wonderful," Sheehan says. "But our bodies are at war internally."

This year, the MS Walk has two routes through the Reid Park Zoo. Participation is free, but donations that go to MS research are encouraged and rewarded.

Participants who raise $50, by personally donating and encouraging others to donate, get free entry to the zoo after the walk ends at 9 a.m. Raising $250 gets participants into a beer garden hosted by Frog & Firkin. The event will include food, vendors, information on local services and support groups, and a live band.

The money raised goes to the MS Society, where about 75 percent of it goes to research for a cure and services for people with MS. Other money is invested in support services such as fundraising.

Last year Carol and Debbie's Superstars, with 25 people on their team, raised $5,000 for the MS Society. The entire walk raised close to $60,000. This year's goal is $65,000, says Hunter, who's volunteered with the walk for many years and is involved with the planning committee.

On the walk, Sheehan carries a few charms for inspiration: the license from her dog who died, her dad's military dog tag and an imprint of her mother's ring finger. There's an ancient belief that a vein from the ring finger connects to the heart. So although both Sheehan's parents are dead, on the walk she feels connected to their hearts.

After the walk, Sheehan needs a couple days in bed to recover. She smiles remembering it used to be six days.

"It's who you surround yourself with, but it's also your attitude," she says. "You really have to understand your body. I have MS, but it doesn't have me."