Something about Street Taco & Beer Co.’s concept seems familiar, yet distinctly itself 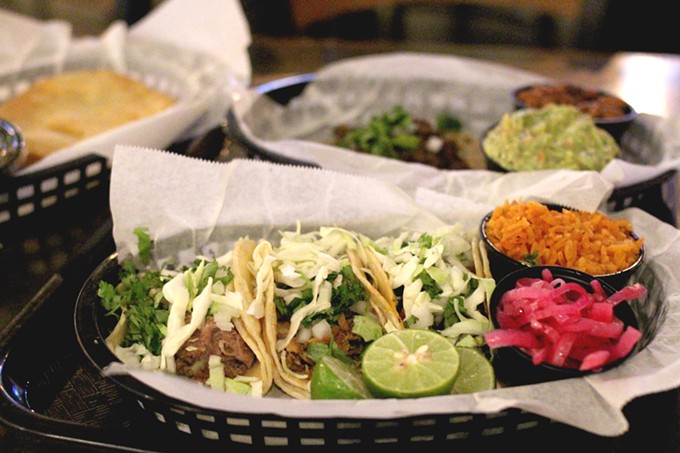 I thought it the first moment I stepped into Street Taco & Beer Co. soon after the spot opened, and I think it now. Indeed, it's difficult not to draw comparisons between this locally owned, family-run restaurant and the fast casual giant Chipotle. From the assembly line style of food preparation to the corrugated metal decor to the simple construct-as-you-will menu boards, it's clear more than a couple of ideas have been borrowed from Chipotle.

However, if we can learn anything from the father of the over 100-year-old assembly line, Henry Ford, in regards to borrowing ideas, maybe it's this:

"I invented nothing new. I simply assembled the discoveries of other men," Ford is oft quoted as saying.

The use of an assembly line just makes sense for speed and efficiency, whether you're putting together a carne asada burrito or manufacturing a car. However, comparing the two restaurants is actually useful for more than just saying, "Hey, wait a minute. Didn't Chipotle already do this?"

First of all, you'll notice that the service at Street Taco seems friendlier than it's larger, national counterpart. Even during lunch rushes, which tend to happen any weekday in the busy downtown area, the staff is ready and willing to take an extra second (while still prepping still of course) to explain menu items or other questions you may have. Really though, the concept is pretty straightforward: pick your dining option (for here or to go), pick a method of delivery (taco, burrito, torta, quesadilla, nachos, fries), choose your protein (carne asada, shredded beef, al pastor, carnitas, pollo asado, fried fish) or veggies and select your add-ons and sides.

The next difference you'll likely notice, especially during lunch, is just how quickly Street Taco's team can bust through a line of customers. The only bottleneck that I really ever witnessed was at the chips and salsa bar, where customers are left to their own devices. I would pit Street Taco's team against one from Chipotle in a speed test any day.

The main difference, surprisingly enough, is the food. Yes, they both offer Mexican food, and obviously, Chipotle is burrito-centric, while taco is literally in Street Taco's name, but the bigger contrast is in the components. Chipotle flaunts this perceived notion of healthiness, while Street Taco doesn't seem to worry about it at all. If you want molten cheese covered chips sprinkled with pork ($7.50), have at it. You want beef and cheese on your French fries ($7.50)? Go nuts. If you're looking for a $3.50 Sonoran-style hot dog before the food carts post up, they've got you covered too.

And, with fat often comes richer flavor—sorry dieters, but there's a reason restaurant dishes love their butter and oil. The al pastor at Street Taco is spicy and bright red, shaved from a spit and paired with pineapple—just as you'd want it to be. Conversely, the carnitas prove to be a little over fatty, not just glistening, but actually dripping in its own grease, which isn't particularly appetizing.

In fact, one thing Street Taco could take notes from the big guys is a lesson in consistency. An order of ceviche ($6.50) comes with two portion cups filled with diced white fish, tomatoes, onions and more and two tostadas. On one visit, one portion cup was nicely chilled, while the other was near frozen and needed a good deal of time to get to an amiable temperature. This might make sense for summer to go orders, but dining in with fish that cold was less than ideal. Maybe there's a reason Chipotle's offerings are fewer than Street Taco's.

While the Street nachos come drenched in cheese sauce, the quesadillas ($4 for just cheese, $6 with meat) get only a light sprinkling. This does allow for quesadillas to keep a crisp, grilled tortilla longer, but the filling left me wanting more. Still, with a massive tortilla as the foundation, quesadillas are just about as filling as the burritos and tortas (which both range in price from $6-$7.50).

On the topic of tortillas, I would suggest you ditch the corn (try not to gasp), which are a little too chewy, especially when doubled up for tacos, and stick with the flour.

Of the sides, the refried beans ($1), calabacitas ($2) and white rice ($1) were the better of the bunch, while the pinto beans ($1), which seemed to come straight from a can to your portion cup, and guacamole ($3), which was intensely salty, could be skipped. The restaurant also serves churros ($2) and Street sundaes ($3) for dessert.

Several bottles of soda ($2), fountain drinks and house agua frescas ($3), including horchata, piña and watermelon-cucumber drinks, are available. Street Taco offers a full bar with beer, wine and tequila, as well. Another difference you'll notice between Street Taco and Chipotle is that, of its eight taps, Street Taco dedicates half to local rotating drafts from Sentinel Peak, Pueblo Vida, Dragoon and Barrio.

So, while this may seem like a more local (in ownership), more naughty (in food) and more friendly (in service) version of that big burrito chain, the differences are enough to set it apart. Though the restaurant could take some cues from the other guys delivering a consistent product, overall the fair pricing and sheer speed of service will likely keep the restaurant packed with the suited business crowd. Plus, Chipotle doesn't give you free chips and salsa.