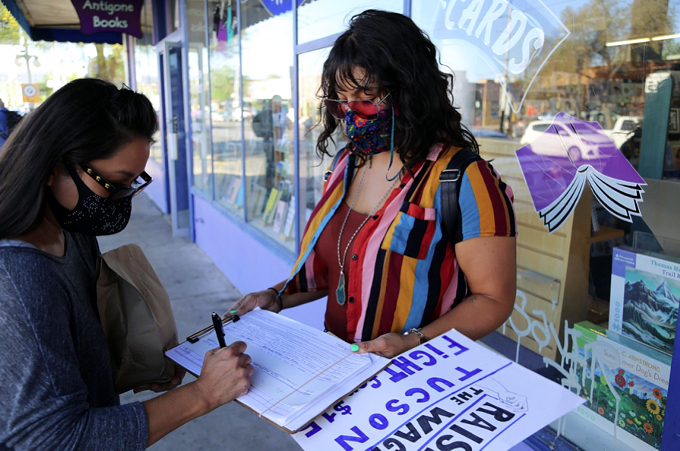 Madison Beal, Tucson Weekly
Tucson Fight for $15 volunteer Brittany Fitzgerald collects signatures on Fourth Avenue to get the Tucson Minimum Wage Act on the ballot this November. The legislation would gradually increase the minimum wage in Tucson to $15 by 2025.

For more than two months, organizers with the Tucson Fight for $15 campaign have worked to collect signatures in the hopes of getting a citywide policy initiative on the ballot this November. The initiative seeks to gradually increase Tucson's minimum wage to $15 by 2025. In addition to increasing wages, the initiative would lead to the implementation of a variety of worker protections, including the creation of a city office of wage enforcement.

"The beautiful thing about the citizens' initiative is it doesn't really require any politicians to be on board," said C.J. Boyd, the campaign manager for Tucson Fight for $15. "We do have politicians that are very much in support of our initiative. But it doesn't require that. It's about people actually pushing legislation themselves, getting broad support and passing legislation based on people's needs."

The idea for the campaign originated about a year ago when a collective of local nonprofit organizations known as the Southern Arizona Prosperity Alliance came together to discuss the root causes of poverty in Tucson. The group said they wanted to address the problem head-on through tangible policy rather than just implementing a series of "band-aid" solutions.

People from low-income communities in Tucson have consistently struggled to cover their costs while earning the minimum wage. Limited access to affordable housing has been a particularly devastating problem—especially since the onset of the pandemic. And the cost of rent in the city only continues to rise. The price of renting a single-family home in Tucson increased by 9.8% from January 2020 to January 2021, according to a study produced by CoreLogic.

"Working for minimum wage is a thing that folks equate to being young and going into the workforce," said Zaira Livier, the director of People's Defense Initiative and a member of the steering committee for Tucson Fight for $15. "But what we need to understand is that a lot of the folks who work for minimum wage—or close to minimum wage—are folks who are parents, who are poor working-class folks who've got a couple of jobs going for themselves. And oftentimes they are people of color, particularly women of color."

PDI played a large role in drafting the Tucson Minimum Wage Act in concert with a team of lawyers and other members of SAPA. The group spent a significant amount of time making sure the bill was ready before they filed with the city to officially launch the campaign towards the end of February.

"Any time you're going to do something like this, anything progressive, you should assume you're going to be met with opposition from the powers that be," Boyd said. "You know that there's going to be people who don't want to pay their employees more and will spend a lot of money to make sure that doesn't happen."

The group modeled the legislation after Flagstaff's Minimum Wage Act or Proposition 414—a citizen's initiative passed by 53.99% of the city's voters in 2016. The legislation raised the city's minimum wage gradually from $10 an hour in 2017 to $15 an hour this January.

Regarding the impact on small businesses, some small business owners in Flagstaff and other locations throughout the U.S. have expressed a willingness to adjust their prices so they can pay their workers a livable wage. Not only does it help workers cover their daily costs, it can also benefit small businesses.

"I have reached out to small local businesses, and almost universally, they're supportive because one of the arguments that they make is that retention of employees is equally important," said Steve Kozachik, the city councilman for Ward 6 in Tucson. "One of the highest costs of doing business, whether you're a big employer or small, is turnover retraining or recruiting. So being able to retain employees is a big deal to our small local businesses."

One of the most important aspects of the legislation would be the implementation of a city office of wage enforcement that would ensure employers cannot steal wages from workers by paying them less than what the law requires, not compensating them for working over-time or incorrectly classifying workers as independent contractors.

"We have a federal minimum wage—and we can all debate about whether it's the right dollar amount, but we have it, it exists—and yet there's no government agency enforcing it," said Billy Peard, an attorney who has spent a large part of his career representing low-wage workers. "Part of what we're doing with this Tucson initiative is to say enough of that. Too many years have gone by with no enforcement of these laws."

In 2016, voters in Arizona passed the Fair Wages & Healthy Families Act, which resulted a gradual increase in the state minimum wage starting in 2017. It also led to the implementation of a paid sick time requirement for the first time in Arizona's history. The Tucson Minimum Wage Act would increase Tucson's minimum wage beyond the state level and ensure more worker protections for those working within city limits.

Boyd and a team of volunteers have been collecting signatures throughout the city since the end of February. It's been a challenge for the volunteers to collect signatures during a pandemic, as movements like Tucson Fight for $15 typically rely on large events to bolster signature collection efforts.

The grassroots campaign needs to collect roughly 15,000 signatures from registered voters in Tucson by July 2 for the proposition to make it on the ballot, but their goal is to collect 30,000 before they submit their signatures for review.

"I think it's so important that people understand just how many hours you have to work on this current minimum wage to be able to just cover your most basic expenses," said Carmen Smith-Estrada, a volunteer with the campaign. "If this bill were to pass, it would really be a step in the right direction for getting people closer to having basic dignity and a better quality of life."

For more information about Tucson Fight for $15 tucsonfightfor15.com