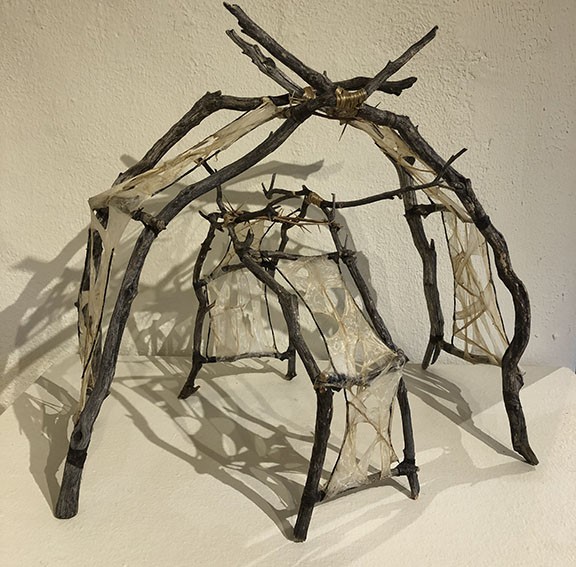 It was 1968, the year of rebellion, and a bunch of Tucson artists, her father, Charles Littler, included, had decamped from the city to the desert. They settled with their families into a former dude ranch outside Oracle and named their new art colony Rancho Linda Vista—the ranch of the beautiful view.

Traveling in a pack with the offspring of the other resident artists, young Selena rambled through cacti, fled from javelinas, made snow forts, spied on adults and generally ran amok in a ravishing landscape.

There was perhaps "no better place to grow up, close to nature, with its volatile beauty all around," she writes in a statement at the Rancho Linda Vista show at Tohono Chul.

Not surprisingly, Littler herself grew up to become an artist, best known for 3D works made out of materials scavenged from the desert where she tramped as a child. She's used "mud, rocks, sticks, hog casing, cotton, leaves, dead bug," and at least once, a "desiccated bat," she writes.

One of some 20 artists, both living and dead, in the retrospective show, Littler is exhibiting two airy sculptural pieces made of unlikely materials. "Stick Swirl" is an elegant assemblage of delicately curving manzanita branches, tethered by translucent hog casings. The branches in "Double Arch," in the same materials, curl like a snake—and rise gracefully into the air.

Nearby, works by her late father demonstrate that there was never a single RLV aesthetic, no consensus that the art had to be inspired by nature. His wonderfully lush acrylic, "The Motorcyclist," is an expressionist painting pared down into simple, colorful shapes. His dark charcoal self-portrait is rough and defiant.

For Charles, one of the ranch founders—some would say the founder—the colony itself was an experimental art project. Judging by this exhibition, that experiment is thriving more than 50 years after it began. The show moves from works by founding members now deceased to artists still at work today.

Among the late old-timers, McGrew is remembered with an exquisite watercolor of Muleshoe Ranch, and Davis is represented by two of his typically enigmatic paintings, featuring shadowy boots and an anteater.

And stories like Selena Littler's abound. There are plenty of RLV'ers of the second and even third generations making their marks as artists.

Turner Davis, son of the artist couple James and Mary Anne, is now a working artist in Phoenix. He's exhibiting complicated fantasy works—a charcoal of a lion, an ink drawing of a family in a house—that are similar yet different from the work of his father.

Emily Stern Düwel spent summers at the ranch as a kid, the daughter of painter Jean Stern, who contributed four bright oils on canvas, evoking the brisk winds and colors of the ocean. As an adult, Düwel and her artist husband, Matthias Düwel, left their New York City home and settled at the ranch.

The desert, she writes, eventually began to feed her art. Her acrylic paintings on view are swirling near-abstractions of desert and mountain.

Matthias Düwel, who grew up in post-war Germany, has long made paintings about urban destruction. But lately, he writes, he's turned his attention to the even more dangerous destruction of the environment, and the worldwide flight of refugees. His new abstracted oils evoke collapse and disorder.

A relative newcomer to RLV, Judith Stewart moved in after an arts residency in 1991. She makes haunting large-scale sculptures of fractured female figures. A woman in bronze, in the gorgeous "The Stepper," is like a figure from the past, long gone but still powerful.

Stewart's adult daughter Danielle Neibling also lives at the ranch, with her two children. Neibling's ceramics and paintings are fresh and contemporary.

But it's the Littler family that comes closest to an art dynasty. Charles's wife Dolan is an artist in Tucson, working as a teacher and creates bold encaustics and pastels of animals. Selena and her artist husband, Imo Baird—also a musician—moved back to the ranch in their 30s to give their son a childhood in nature.

Now grown, Nicolas Baird, the third-generation Littler, is both an artist and a biologist. One of his pieces features a constellation of stars made of the dust of cow bones he found at the ranch.

His three works, he writes, seem to be disconnected fragments, "but here, perhaps, surrounded by the art of the community that raised me, the connections become clear."

showcase a pair of renowned Tucson artists. Andrew Rush, creator of The Drawing Studio in Tucson and an early RLV'er, exhibits richly colored mixed-media works, made partially of the desert seeds and grasses he collects on his walks. Laid onto thick paper, sprayed with acrylics and run through an etching press, the pieces turn into alluring landscapes, of summer skies and autumn leaves.

Painter Jim Waid never joined up with RLV but he had a residency there in October 2005. Known for gloriously colored canvases of abstracted desert flora and fauna, here he's made simple—and lovely—ink sketches of ranch pods and plants.

One drawing documents the ranch's long view to the south: a stretch of desert and mountain under a big sky. It's an iconic vista, burned into the memory of generations of artists at the Ranch of the Beautiful View.