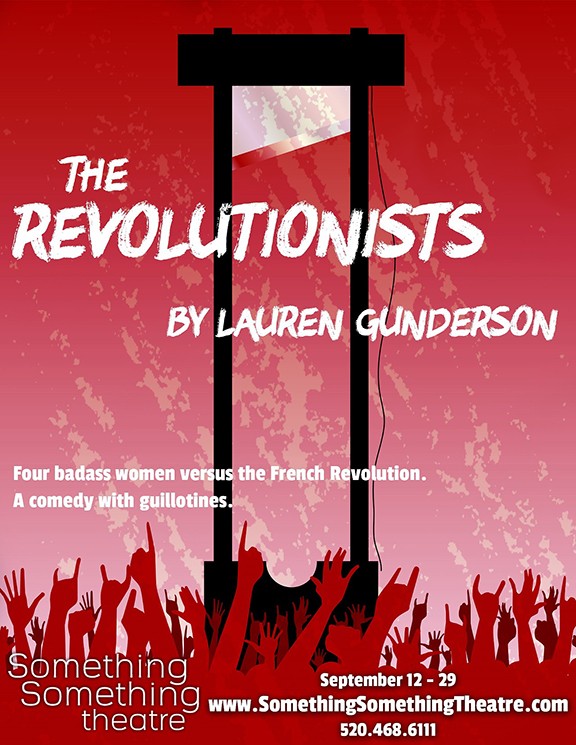 I'm sitting in my chair humming along to "Fight Song" and I have never been more ready to watch some badass women take names and kick ass. The Revolutionists by Lauren Gunderson, produced by Something Something Theatre, is a compelling story about the French revolution and sisterhood. They had me all up in my feelings.

The scene starts with heads rolling. Almost quite literally until playwright Olympe De Gouges, portrayed by Samantha Severson, immediately decides that that is no way to start a play! Thank goodness for that! While the opening moments are nothing but dramatic, the play is, in fact, a comedy. I am in awe of Gunderson's ability to write about the Reign of Terror and Madame Guillotine with a comical twist.

But this is not a one-note play. Beneath the jokes and jabs, there are notes and moments to remind us that their lives are at stake. There is a striking moment when we get to see Madame Guillotine do her part. The combination of the lights, movement, and sounds are impactful. The moment is more abstract than explicit, but nonetheless I cringed.

At first, I was baffled, because even though the play takes place during the French Revolution, the dialogue is modern. The sassy and playful banter among the four women is fun and refreshing. The wordplay and unexpected twists and turns kept me on my toes. Also, there were moments when they broke the fourth wall and engaged with the audience. As a result I felt even more connected to the women on stage due to the moment of mutual acknowledgment.

Joan O' Dwyer did a marvelous job selecting a cohesive ensemble. Each actress brought their character to life.

Whitney Woodcock, who portrayed a credulous Marie Antoinette, is hilarious. Her line delivery was on point. Samantha captures the formidable journey of Olympe as she decides her role in the revolution. Dawn MacMillan captured the badass passionate essence of Marianne Angelle. I particularly enjoyed the way she described her husband. She painted a picture of him that left me wondering, "Does he have a brother?"

My favorite character was Charlotte Corday, portrayed by Grace Otto. There's a moment where Charlotte reveals to Marianne that she is afraid. It's a tender and awe-striking moment when one sees a strong person at their most vulnerable. It's a gift to share one's vulnerability as it is a gift to care for it. The intimacy between them is palpable as Marianne comforts Charlotte. They demonstrate what they want: sisterhood.

This story is one for the books. It's bold because it's herstory. How often have we accepted history as truth without really recognizing that history itself is not only biased but has misconceptualized women? In this play, women reclaim their stories—their own person. We see the goddesses in them as well as their humanity. These four women inspire, empower, challenge, and hold each other accountable. Well-behaved women rarely make history, but how many women that make history are overlooked or villainized? While these things did not occur in real life, the play acquaints us with four unapologetic women who have impacted and shaped history.

Remember when Wonder Woman came out? I don't know about you, but when I left the cinema, I could have kicked anyone's ass. When I left the theater last night, I felt empowered. I am grateful that Something Something Theatre exists in our community and appreciate their intention to produce plays by women for everyone. All of their plays this season are written by women and more than half are directed by women. My only qualm is that I wish that several of the playwrights had been women of color. Following the words of Sojourner Truth, "And ain't I a woman?"

Don't forget the cookies because The Revolutionists are bringing the tea.