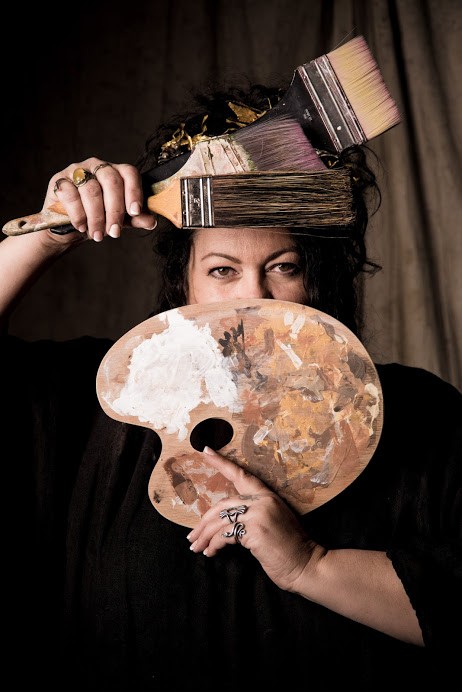 In the rumbling merriment of The Buffet bar, Johanna Martinez and I sit surrounded by faces carved by heartache. It's a strangely cold day in Tucson. Motown soars from the jukebox.

With feather earrings, a lunar tattoo on her Saturn finger and a draping black poncho, Johanna is a vision of desert gothic. As we talk, regulars introduce her to their friends as the artist who painted the Iron Horse mural on the outside wall. Its images of buffalos and trains represent the eradication of the indigenous through western expansion.

Johanna considers herself a "calligraffitist," fusing calligraphy and graffiti. But she sees herself as a creative hustler foremost. She feels she doesn't have a style. That working in theater and tattoos taught her to be fluid to fit the client or the period of the stage piece.

Johanna is less well-known than muralists like Tucson's Danny Martin, but in the tree of this town's creative history, she's embedded in nearly 30 years of its rings. Her art is the kind that might flash past you 100 times before you connect it with its source. You can see her work in the shop signs for the defunct Vaudeville, and the District, and the current Moon Smoke Shop. And various stage sets, and the prominent mural on Meyer Street in Barrio Viejo, and the outside wall of The Buffet, and tucked in a side street of Barrio Santa Rosa.

Johanna's first creative impressions were of her mom teaching arts and crafts at the Industrial School for the Blind, and the technicolor graffiti exploding across the trains and walls of New York City in the 1970s and '80s as she moved between her teenage home of Connecticut, her birthplace of Long Island and her Italian family in Brooklyn.

She first came to Tucson visiting her grandparents. Her grandfather was a carnival barker who jumped trains in the Great Depression and retired with her grandmother on Tucson's east side. Looking at the stained-glass saguaro cactus in their trailer window, she felt a deep connection to the desert. It would one day bring her permanently back.

Growing up in Long Island, she began imitating the calligraphy of her mother's friend and crafting banners for her friends. She was 12 years old when she began working as a teacher's helper, mixing colors and cleaning up. She was 16 when she began her mentorship with tattoo legend Spider Webb, in a whirlwind scene of porn stars and artists like GG Allin. Her best friend, Liz Buckingham (of doom-metal band Electric Wizard) was then working for Webb, so Johanna began hanging at the shop. Her lettering skills filled a void, and she was put to work. From Webb, she learned what it took to be a working artist. When Webb moved back to New York City, Johanna looked to new horizons.

The stained-glass saguaro pulsed like the North Star. She headed to Arizona and continued to hone her craft in the male-dominated tattoo world but grew frustrated with the lack of financial opportunities. Tattooing on bodies had taught her the vernacular of space, making the transition to architecture natural. She learned muraling in Amado, Arizona, doing flourishes on the houses and embellishments over archways.

Her mosaic and mural work led to teaching art to incarcerated youth at a juvenile detention center. Johanna focused on teaching the kids how to mural because administrators viewed the mosaic tools as too dangerous, she says. But Johanna eventually left in anger. It wasn't just tools perceived as dangerous, she says, but also the imagery and underlying ideas. She recalls a decision to veto a mural celebrating Mexican identity with particular frustration. This fueled the passion to honor history and culture with the projects to come.

With Johanna it's about maintaining the line, the line between past and future, between money and art, her clients' needs and her own.

To be a creative hustler is to be a survivor who adapts to the times. Along with her art, she's the tour manager of Electric Wizard and has ventured into the CB oil market, her el Fortuna product carried at Moon Smoke Shop. And there's her work with Pan Left production offshoot, Luxxarte, a social justice art collective run by women artists such as Gabriela Galup of Maki Maki Theater, Özlem Ayse Özgür of the No Gun Violence Quilt Project and Raquel Mogollon. Their focus is strengthening community ties through art.

Her latest collaboration was assisting Alex Jimenez for the interactive Talking Mural project. The mural consists of Martinez's paintings of the history of South 12th Avenue alongside interviews Jimenez conducted with the business owners for her larger project, Abecedario del Sur. They can be played when the QR code on the wall is scanned.

As an artist and an outsider, she asks herself: "How can I honor the people who came before?" She stresses the importance of following the lead of Old Pueblo creatives like Alex Jimenez who are woven into the heart of the barrios like blood vessels.

She constantly asks herself: "Am I simply prettifying the area or am I honoring history?" She believes she has to question the role of artist as gentrifier. She researches at the Arizona Historical Society and goes to neighborhood association meetings. She sits at the bar and listens to the sorrows and reveries of times gone by.

Her paintbrush threads along slowly with the vocal cords of Lalo Guerrero, and the scents of the lost bakeries, and the laughter of the children who grew into old men and women and then turned to smoke, all of it singing in colors on gridded adobe walls. Steady as a worker bee, Johanna gathers the ghosts of the barrio like pollen, constructing honeycombs of its history.

As we leave the warmth of The Buffet and head to Fourth Avenue for tacos, we note how much downtown has changed. The buildings her art once adorned have been demolished with the construction of the streetcar. When I ask how it feels to see her sign work disappear, Johanna says graffiti culture taught her that everything is ephemeral. That the line may be erased, but will never cease. And tomorrow the paintbrush will rise like the sun and fill the darkness, and the line will flow.