#GreenShirtGuy has something to tell you 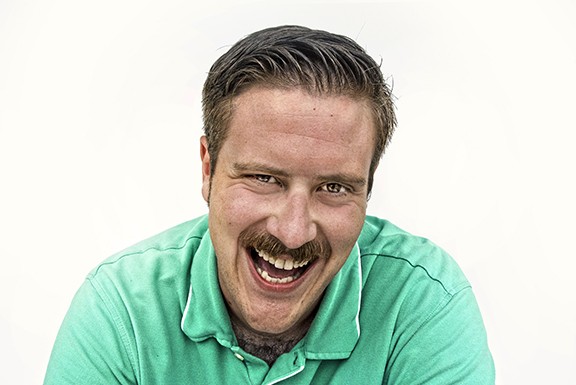 Alex Kack (#GreenShirtGuy)
It's weird to wake up and receive a protest meme using your face from Hong Kong.

There's nothing about the worldwide response to last week's city council meeting that can be described in any other way than that.

If you've managed to avoid seeing the viral video, my colleagues and I at the People's Defense Initiative were in attendance to watch the mayor and council formally place the Sanctuary City Initiative, that we've been tirelessly working on, on to the ballot for you, the voters of Tucson, to decide.

During this largely ceremonial vote, two protestors from the AZ Patriots group decided to cause a disturbance, they yelled at the mayor and council spouting xenophobic talking points. Eventually they were removed by police officers present on the scene. KVOA filmed the incident and as fate would have it the camera man found it pertinent to zoom in on my face as I laughed through the absurdity of it all. The video quickly went viral and sent my life into a dizzying tail spin for the next 72 hours. Somehow this silly, natural reaction struck a chord with a lot of America, and then to the much larger world.

It's worth noting some of the irony that's inherent in the events that transpired there: A group that tries to wrap itself in toxic nationalism went to protest not just the notion of Tucson achieving Sanctuary City status, but whether the residents of our town should even have a say on the issue. In this sense, their viewpoint isn't just hateful and bigoted, it's un-democratic and downright un-American. At one point, they even felt the need to add language to the pledge of allegiance. Patriots indeed.

Sanctuary status would ensure that Tucson's most vulnerable residents feel safe interacting with law enforcement, in their places of worship and in hospitals. This measure isn't just a matter of good policy that will make our city safer and prioritize our law enforcement officers' role as first responders; it's a statement of morality and the values that I believe the residents of Tucson hold dear: that all are welcome here, that everyone deserves to feel safe and be treated with dignity, that we respect humanity. For these reasons, I'm confident that the voters will pass Proposition 205 this fall.

The initiative will strengthen our community, it creates strong policy that will clarify the rights of victims when interacting with local law enforcement and will allow undocumented residents in our community to report criminal activity without fear of becoming a target for deportation themselves.

This would be the first time direct democracy, through a citizen-led initiative, would lead to Sanctuary City status in our nation's history. This historic proposition deserves the nation's attention that it is now receiving, even if it took me laughing in a pastel Penguin polo until my stomach hurt to get it there.

The messages of support I've received since #GreenShirtGuy "broke" the internet have been unbelievably moving. When people stop me in the street, it isn't just to get their photo taken or to meet a living meme, it's to tell me how they feel this initiative will make their lives and the lives of people they know better. The internet, like the democratic process, is supposed to bring people together. In this moment, both collided into something truly special. Finding the humor in ludicrous hateful displays has helped to rally our community around an effort to protect those individuals that same hate targeted.

Around the world people got an inside look into the democratic process in Tucson, Arizona. While to some the scene looked chaotic, unusual and like something more akin to an NBC comedy (looking at you, Amy Poehler) than a government proceeding, to me I found it a perfect representation of our community.

Tucson is offbeat and quirky. To an outsider, it might seem strange. But it's also a caring and compassionate place, and when I look back at that video that's what I see: a whole community rising up to confront hate in their own ways. Some yelled, some fled and ignored, and I laughed, but the message was clear: The people that choose to reside in the Old Pueblo will not tolerate hate in our home.