'Iron Man 3' isn't as good as 'Avengers,' but is still a ton of dark-humored fun

Shane Black, writer of such infamous screenplays as Lethal Weapon and Last Action Hero, made one of my all-time favorite directorial debuts with 2005's Kiss Kiss Bang Bang. I thought it marked the arrival of a true directorial force.

And then he just disappeared.

Kiss Kiss Bang Bang featured the best Robert Downey Jr. performance ever put to screen (If you haven't seen Kiss Kiss Bang Bang, and you think I'm overdoing it with the complimentary words, just watch the movie). Maybe Downey agrees with that statement, because he pushed for Black as his director on Iron Man 3 and, thankfully, he got his wish.

Iron Man 3 is as good as the first in the franchise, markedly better than the OK second installment and just slightly inferior to last year's The Avengers. Like Kiss Kiss Bang Bang, it features dark humor and gives us a protagonist that is slightly unreliable. This movie shows us a Tony Stark with the capacity for major slippage.

The film opens with a few mistakes Stark made a long time ago, before he went all iron, and sets us up for the perils Stark is facing today. Chief among his enemies is the Mandarin (Ben Kingsley), a tripped-out version of Osama Bin Laden who executes Americans on TV and openly taunts the president (William Sadler).

Another big enemy would be himself, because he's battling panic attacks and insomnia after the events of The Avengers. These blows to his mental and physical capacity lead to major mishaps in his laboratory, and a pretty scary moment when one of his suits pounces on Pepper Potts (Gwyneth Paltrow) in their bedroom.

Chief among Stark's flaws has always been his vanity, which leads to his calling out the Mandarin, resulting in all kinds of hellfire coming down on his West Coast compound. Stark winds up going deep undercover, at one point with a kid sidekick (Tyler Simpkins). The kid sidekick stuff sounds like it would be lame, doesn't it? Black and Downey have a way of taking conventional crap and having a lot of fun with it, so the kid is cool.

Like many "No. 3" superhero films before it, Iron Man 3 piles on the villains and potential villains. In the intro flashback, we meet nerdy Aldrich Killian (Guy Pearce), who is working on some really big genetics thing. Stark blows him off so he can sleep with Maya Hansen (Rebecca Hall), another scientist working on something she thinks will be for the good of man, but probably won't be in the end.

James Badge Dale and Stephanie Szostak are on hand as Mandarin assassins who have the power to heat up their bodies Human Torch-style and regenerate limbs when they are lopped off. They remind me a bit of Robert Patrick in Terminator 2 with their unstoppable evil, although their performances are allowed to contain a little more depth.

Paltrow is allowed to do more in this installment, with her Pepper going through all kinds of tribulations. Like Tom Cruise, all of Paltrow's public image nightmare garbage tends to distract from the fact she can act up a storm, and she's typically great in this one. Don Cheadle gets limited screen time as Col. James Rhodes/War Machine/Iron Patriot, but he certainly makes the most of it.

As for the Mandarin, Kingsley has a lot of fun in ways you won't expect. Simply said, the Mandarin is one of the more unique villains to arise from the Marvel movie franchises, and he takes some major detours from his comic book incarnation.

Black and Downey had a rather daunting task with this one: How do you take the Iron Man back to Earth after a movie (The Avengers) that involved aliens, Hulks, Thors and Scarlett Johansson in tights? The answer is simple: You allow Downey to riff, you surround him with a cast that matches his brilliance, and you allow the Stark character to remain human and vulnerable.

The action scenes are stellar. One that involves a high-altitude rescue after a bunch of people are sucked out of a plane is the best of the franchise thus far, and the finale involving multiple suits battling the flame guys is a rouser. And let it be said that Black manages an excellent balance of action and character development, with every major character in the film getting satisfactory screen time.

Black and Downey are a great screen team, and that's highly apparent in Iron Man 3. Next up for Tony Stark will be Avengers 2, then who knows what after that. More than any other superhero franchise, this one is going to be a bitch to reboot when Downey decides to hang it up.

One last thing ... stay for the credits, will you? It's been many years and many Marvel movies with the same "after the credits" surprise format, yet I still see a parade of people getting up and walking out after the credits start.

You paid your dollars for the seat and the funny glasses (Yes, you have a 3-D option for Iron Man 3), so stay put until everything goes to black. I'm tired of everybody whining when they realize they've missed something when going over the weekend's flicks at the water cooler.

Iron Man 3 is not showing in any theaters in the area. 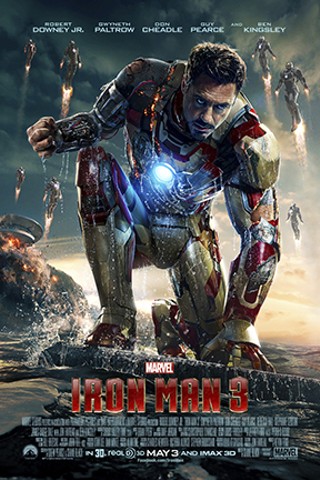