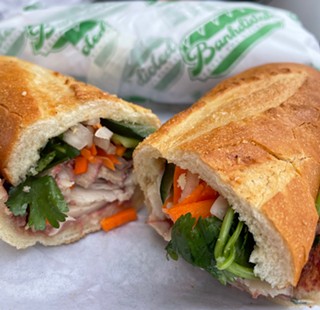 It's been described as a banh mi boom when an information technology executive partnered with a real estate professional last fall to respond to a paucity of local purveyors of Vietnam's street food staple.

But without previous restaurant experience, what could they offer to patrons who would bring certain expectations for authenticity to their door? Could it be generations of wisdom from the Southeast Asia communities where their respective families have deep roots?

Yeah, that'll do it.

Kim Nguyen, whose family hails from Vietnam, and Don Vongtheung, who came to the United States from Thailand, are both first-generation Asian Americans. Their passion for the banh mi sandwich was reignited when they hammered out a deal on a new restaurant called Banhdicted.

"Kim was living in San Diego around that time, and whenever she'd come to Tucson for a visit, I'd ask her to bring me 10 banh mi sandwiches from A Chau, one of our favorite Vietnamese restaurants," said Vongtheung, co-owner of Banhdicted, 1980 W. Orange Grove Road. "There aren't many good banh mi shops here and that started the idea for our new restaurant."

Vongtheung and Nguyen opened quietly last October but it didn't take long for lines to start forming at the counter. Vongtheung attributes the strong response to their nod to tradition, their multiple variations on the banh mi theme, and their overall business philosophy.

"The banh mi experience is all about the bread, and we wanted ours to be the best," he said. After sampling breads at seven local bakeries, they gave their business exclusively to La Baguette Bakery, which they claim is "distinct from the rest of the herd."

"These baguettes, made by an amazing local family, are lighter and softer than standard banh mi breads," he said. "Typical banh mis can be a little hard and crumbly, but ours maintain an interior softness even after they're toasted."

Banhdicted features six versions of banh mi on its menu, each with the classic line-up of pickled carrots and daikon radishes, liver pate spread, cucumber, jalapenos, and cilantro. The protein is the pivotal element, with the AZ Special with Vietnamese ham and pork belly holding the bestseller position.

"This one is the staple banh mi, and if you've never had a banh mi, this is the go-to," he said.

Vongtheung starts the process by brining pork belly for 24-48 hours in a secret sauce, steaming it for four hours, and chilling it for six hours. It's then sliced before it lands on the baguette and goes into the oven.

Other versions include lemongrass beef, barbecue pork, chicken, and tofu, as well as a breakfast banh mi with eggs and pork belly. Two new versions, with spicy Laotion sausage and Vietnamese meatballs, are expected to hit the menu in the next few weeks.

The couple's business philosophy is straightforward.

"Keep it simple, keep it easy, and focus on what you do best," he said. "Our specialty is banh mi, so we've decided not to expand our menu beyond these six to 10 sandwiches."

When they first opened the restaurant, Vongtheung and Nguyen were kicking out 10 pounds of pickled vegetables each week. Now they're up to 100 pounds every few days. That's quite a spike over a six-month period of time, which suggests that their business model is working.

"If you love what you do, believe in what you do, and listen to your customers, the money will come," said Vongtheung. And come it has, as the number of Tucson's certifiably Banhdicted continues to grow.

Contact Matt Russell, whose day job is CEO of Russell Public Communications, at mrussell@russellpublic.com. Russell is also the publisher of OnTheMenuLive.com as well as the host of the Friday Weekend Watch segment on the "Buckmaster Show" on KVOI 1030 AM.