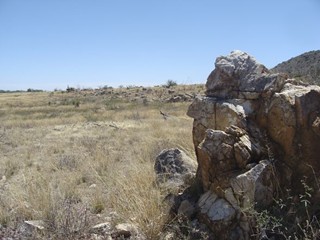 Mari Herreras
A view of where the Kinder Morgan pipeline will cut through at Melissa Owen's Sierra Vista Ranch in Sasabe.

Melissa Owen is the first to admit it's not an easy life living in the desert grasslands of the Altar Valley, but as she looks at the view from her Sierra Vista Ranch home porch she sees the Baboquivari Mountains and that makes the difficulties worth every moment.

Owen says since the purchase of their ranch property 11 years ago, the demographic of undocumented immigrants making their way across the desert has changed from families with children to drug mules. That coupled with incidents of violence has made it clear to the couple, that in their opinion, the border is not secure.

Which makes the ongoing proposal of a 60-mile long, 36-inch wide natural gas line, connecting from the Mexico border at Sasabe and going across the Altar Valley ranch lands to the Tucson Mountain Park, troubling to Owens, other ranch families and residents, as well as Pima County and the Board of Supervisors.

"First, it's a safety issue," Owen says, going over her concerns. "It isn't safe. Essentially this pipeline will create a highway for trafficking and make the situation even worse."

The next concern for Owen is the environmental impact of extending the gas line through the landscape. Since purchasing her property 11 years ago, Owen has worked to return her ranch land to its natural state, working on restoration projects and with the help of a U.S. Fish and Wildlife grant, Owen was able to restore two underground water tanks to use as a water source for local wildlife. A trip camera she installed has produced photos of the animals in the areas stopping for a drink—javelina, bobcats and other creatures, including snaps of those walking on her property illegally, from hunters to undocumented.

"We bought this land so we could protect and enrich it," she says.

"It's hard being down here. It's dangerous. But this view is my reward, which also makes (the pipeline) a desecration. It's shameful."

Pima County officials agree. During the Tuesday, April 8 Pima County Board of Supervisor's meeting, the board was expected to pass a resolution seeking mitigation for damages and costs to Pima County. However, the board decided to postpone a $12 million demand for environmental damages and security costs due to the construction of the Sierrita pipeline.

The county will continue discussions with Kinder Morgan, which now heads the project, but according to Supervisor Sharon Bronson, the county continues to look at legal recourse, too.

Bronson told the Weekly that she and other county officials continue to oppose the west route of the pipeline and hope Fish and Wildlife changes its mind to approve a route on Buenos Aires Wildlife Refuge along the roadway on property previously disturbed, not pristine like the route that cuts through the Altar Valley.

During the meeting and to the Weekly, Bronson said in her opinion Kinder Morgan has not acted in good faith, and Fish and Wildlife's decision has been disappointing.

"Without substantial dialogue and change in position, we will seek an appeal," with county staff currently talking with Kinder Morgan and researching legal options. "Perhaps they have the right to move forward with this project, but that doesn't mean it is right. From my view, besides acting in bad faith, they are bullies."

At the April 8 meeting, Pima County Administrator Chuck Huckelberry issued a memorandum with the proposed mitigation resolution to the Board of Supervisors outlining the pipeline project's two year history with the county, from the company's application process with the Federal Regulatory Energy Commission (FERC) to the community discussions with Fish and Wildlife.

"We have advocated throughout the National Environmental Police Act (NEPA) public scoping and environmental impact statement process for the selection of a route that would cause the fewest impacts and costs to Pima County and the residents of Altar Valley," he wrote.

"Now that FERC has issued its Final Environmental Impact Statement, this project will very likely be approved; and there has been no mitigation offered to Pima County regarding our concerns of how the construction and operation of this pipeline will result in an increase in illegal and unwanted trafficking."

Huckleberry wrote that the public safety issues and related services come at a cost, as well as the destruction of almost 860 acres of Conservation Land System habitat. At one time the county estimated that the project could generate about $12.4 million in tax revenues, but now Huckelberry says most of it would go to the state with only $7,334 going to the county. That can't cover projected costs of more than $1 million annually and additional one-time costs for habitat loss and law enforcement of more than $4 million.

"Kinder/Morgan should be required to set up a mitigation fund of $7 million to address and mitigate the long-term environmental degradation that results from this pipeline," he wrote.

Houston-based Kinder Morgan spokesperson Richard Wheatley, director of corporate communications and public affairs, told the Weekly that throughout the public planning of the project starting in early 2012, the company has had an open dialogue with Pima County officials, the state, other agencies, as well as ranchers and the Altar Valley Conservation Alliance.

"Dialogue continues with the county and other stakeholders," he wrote in an email. "In our view, during the course of the last two years, our dialogue has been constructive and at all times honest and transparent. It should be noted that the Sierrita Pipeline Project is and will be responsible for all of the restoration, mediation and monitoring of the pipeline right of way and will bear that expense, not Pima County."

Wheatley stated that he doubts Fish and Wildlife will change its mind and allow the pipeline on refuge land, but the company, despite the opinion shared during the April 8 Board of Supervisors' meeting, says dialogue continues with  Pima County and other stakeholders. The company believes the pipeline is good for the county with "approximately $1.6 million of annual property tax revenues that will be received directly by the County from Sierrita, and by approximately $3.3 million of additional annual property tax payments that will benefit local fire and school districts in Pima County."

While the county and Kinder Morgan continue to debate those facts in the next month or so, Owens says she sees the project and the fact that the company can condemn her and other ranch property to move the pipeline forward, as a way for the corporation to steal from landowners, as well as the county.

"The pipeline will cut across from here to there," Owen says, standing in the middle of the road on her property pointing out the stakes when the company surveyed the area. The pipeline will go along the edge of the ranch water tanks.

"This will be a permanent scar, and we're not fooled. They can't make it look the way it once did."