Rebuilding cities and propelling the economy through university partnership 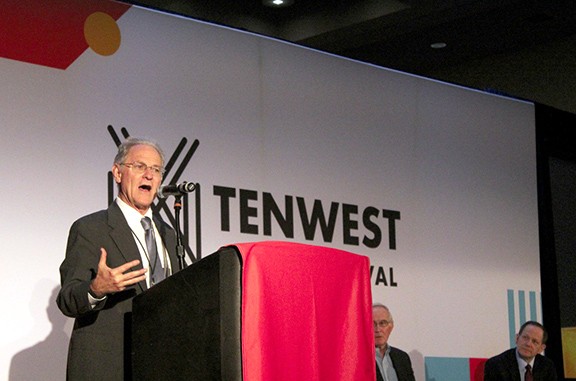 Jeff Gardner
Tucson Mayor Jonathan Rothschild organized the opening event at this year’s TENWEST Festival, a symposium about city revitalization.
The first event at this year's TENWEST Impact Festival set the stage for a week of innovation and inspiration, just as it should. The so-called Mayor's Symposium, facilitated by Tucson's own Jonathan Rothschild, gathered three former mayors from across the country to talk about the successes and struggles during their tenure. Despite hailing from different backgrounds and states, every speaker agreed on the same key point: Partnerships between universities and cities can propel entire economies out of depression and into the future.

Beside Mayor Rothschild sat Tom Murphy, three-term mayor of Pittsburgh from 1994 to 2005; Francis Slay, four-term mayor of St. Louis from 2001 to 2017; and Arizona Congressman Greg Stanton, two-term mayor of Phoenix from 2012 to 2018. Each of the four men emphasized how a partnership with a university system led to an innovation district, and revitalized a previously lacking area in their respective city.

"Local governments are in a position to be doing more and more with less and less," Mayor Rothschild said. "But if we work with smart cities, we can deliver more."

Murphy became mayor of Pittsburgh at a time of great industrial restructuring. The city, which once had a core of steel and raw materials manufacturing, was more recently home to more than 1,000 acres of abandoned industrial properties. Once the manufacturing center of the US, Pittsburgh experienced a large economic and population decline.

"In a seven-year period, we lost 150,000 jobs," Murphy said. "Not only was our city losing population, our whole area was losing population... And the people who were leaving were young people. It was a crisis."

Murphy said workers and developers needed to re-imagine Pittsburgh, including the construction of a multimillion dollar development fund. He said the key to urban revitalization and development was private/public partnerships, particularly with research centers like Carnegie Mellon University. This partnership strategy resulted in more than $4.5 billion in economic development in the city.

This development turned the city from focusing on manufacturing into focusing on skilled labor and research. He said although the city did not have an entrepreneurial culture or venture capital, a series of "big, difficult" decisions helped turn Pittsburgh around. Now, the city has the presence of tech companies like Uber, Google and Amazon, and an artificial intelligence industry run from Carnegie Mellon.

"The pace of change, the pace of technology, is one of the biggest challenges cities face," Murphy said. "But if you go to Pittsburgh today, you see billions of dollars of development."

In a similar situation, when Slay took office in St. Louis in 2001, there were roughly 150 vacant buildings in the city's downtown area. St. Louis was losing jobs and people faster than almost any other city in the nation. But during his tenure, St. Louis experienced a more than 133 percent increase in population, and just last year, Forbes ranked St. Louis number two on their list of the Top 10 Rising Cities For Startups. Slay said this turnaround, again, is thanks to public/private partnerships with local universities.

In St. Louis' case, these partnerships brought together universities, businesses and government agencies. This led to the "innovation district" in midtown, Cortex Innovation Community, founded in 2002. The 200-acre district is a hub for the life and biological sciences tied to Washington University, University of Missouri, and St. Louis University. According to Slay, the life sciences were a tremendous opportunity for the city, and resulted in the innovation district being home to 6,000 jobs and 450 science and engineering companies.

"We realized St. Louis must develop its own enterprises, rather than just export good ideas somewhere else," Slay said. "The intensity of Cortex's development has catalyzed our community and raised St. Louis' profile."

When Stanton became mayor in 2012, Phoenix was still recovering from the Great Recession. According to him, Phoenix was hit particularly bad because their economy was not rooted in innovation. To resolve this, Stanton partnered with what he saw as the home of innovation: higher education.

"We didn't wait for someone else to invest, we as a city invested," Stanton said. "We built a higher education nucleus in Phoenix."

The city invested millions into higher education, including putting $12 million into Arizona State University's College of Law via construction bonds, and $13 million to ASU's Thunderbird School of Global Management. Phoenix's partnerships also included reaching down to Tucson, resulting in University of Arizona's Cancer Center forming a presence in Phoenix.

Stanton also cites public transportation as a major boost for his city's economy. In 2017, Phoenix voters approved a $31 billion transportation package that added 42 miles of light rail and more than 1,000 miles of bike lanes. According to Staton, $11 billion of investment has occurred within a quarter mile of the light rail track throughout downtown Phoenix.

"It's created an unprecedented economic boost," Stanton said. "From 2012 to 2017, the number of tech companies in Phoenix quadrupled."

While looking at these three cities' struggles, and comparing them to Tucson, Rothschild agreed that all cities "face identical problems." And while the facts and solutions might vary, the key is the same: partnerships.

Tucson falls well in line with Pittsburgh, St. Louis and Phoenix, in partnering with higher education. The University of Arizona is one of the largest employers in the city of Tucson, and with city-backed developments like UA Tech Park at The Bridges and Oro Valley Innovation Labs, the campus is only expanding. In addition, UA's own new Strategic Plan involves partnering with more local developments, such as TENWEST, in order to "advance creativity-based education, innovative research and community engagement that celebrates the diverse richness" of the borderlands region.

"In order to get things done, you need to galvanize the community," Stanton said.