The year 2010 in review: good guys vs. bad guys, with a little marijuana thrown in 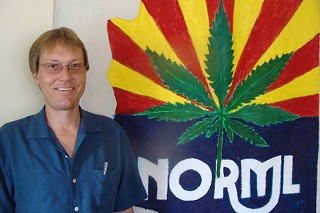 Mari Herreras
Jon Gettel: “I spent six months in the hospital, and four months in intensive care. I nearly died.” The only painkiller that didn’t make him nauseous was marijuana.

The craziness of Arizona in 2010 was enough motivation for some to move away, while others decided to stick around and fight.

In June, Jon Gettel talked to the Tucson Weekly about his fight to legalize medical marijuana ("Pain for Pot?" June 24). The director for the local chapter of the National Organization for the Reform of Marijuana Laws (NORML) was in a near-fatal car accident more than 10 years ago.

"I spent six months in the hospital, and four months in intensive care. I nearly died. I had to go through months of grueling physical therapy," Gettel remembered.

The only painkiller than didn't make him nauseous was marijuana, which he continues to use to help him with issues related to the accident. Gettel campaigned in Pima County for Proposition 203, the medical marijuana law which passed—barely—in the November election.

Now, Gettel is working with other medical-marijuana advocates regarding concerns with the state Department of Health Services' proposed regulations. They were recently released in draft form for public comment, and Gettel says final regulations are expected to pass in April.

The law only allows 124 dispensaries to operate in the state, and Gettel, who wants to open a dispensary, estimates that the DHS will receive about 1,200 applications. The draft regulations would require each applicant to pay a hefty $5,000 nonrefundable fee.

"That's a chunk of change that will go to the Department of Health Services (and is) supposed to help them support these new regulations—unless the state Legislature decides to sweep that money," he quips.

Also of concern are the proposed $150 patient-card fee and the required number of doctor visits before a patient can get a prescription. DHS wants proof of a patient-doctor relationship, but Gettel says he's not sure how many primary-care physicians will readily prescribe marijuana.

"Two visits are reasonable, but the four visits or more that they want to require is unreasonable," Gettel says. "And I believe $150 is the highest patient fee of any of the 14 medical-marijuana states. ... We are talking about people who are seriously ill and many, I'd say 90 percent, are people with restricted incomes."

Gettel says he fears that between zoning issues and the DHS regulations, the law could become ineffective by making it difficult for dispensaries to open and for people to get marijuana.

Gettel is involved in two groups: the Southwest Arizona Patient Alliance (SWAPA), for patients and caregivers; and the Arizona Dispensary Alliance. The groups are planning a January meeting for those interested in the issues.

To comment on the DHS draft regulations, go to www.azdhs.gov. On the right side, there is a link to information on the call for public comment.

In January, the Weekly talked to Sarah Jones, executive director of Emerge! Center Against Domestic Abuse, a Tucson domestic-violence shelter and counseling agency, as it was struggling with state budget cuts ("Nowhere to Turn," Jan. 28).

The state swept domestic-violence funds into the general fund to help balance the state budget. More than $500,000 was cut from the $1.8 million the agency had received in state funds—and Jones said she was warned by Democratic and Republican lawmakers to expect more cuts.

What made the crisis more worrisome was the lack of communication between the agency and the governor's office.

"We know (the Legislature) has swept away the domestic-violence fund, but we haven't heard anything official yet. The challenge is getting the information. The delay in getting us information is unreal," Jones said back then.

The good news is that communication improved; the bad news is that the organization had to deal with more state cuts, totaling $350,000. "To give credit to the state, we did have notice in April that in about July, there would be a cut of $170,000," Jones says.

The organization prepared for multiple scenarios by merging shelters and changing its delivery of counseling services and other programs. Some staff members were cut; worse, according to Jones, was the cut of 14 shelter beds.

Emerge! turns away about 23 clients per week. The organization works with area shelters, but most shelters do not have staff members experienced with trauma and violence victims, and don't have the needed security, Jones says.

Also at issue is a decline in donations. Jones says that in early 2011, the agency will kick off a campaign to raise money for the crisis line, which costs $200,000 a year to operate and deals with about 20,000 calls a year from victims.

"It's not duplication (of services in Tucson). For some domestic-violence victims, it is the first step they take to figure out how to leave safely," Jones says.

For three years, the Weekly has written about the high-end Saguaro Ranch development in Marana, developer Stephen Phinny, and his angry neighbors who feel Phinny and the town government are violating their right to walk and drive on a public easement on the property ("Smoking Gun?" Feb. 4).

At the beginning of 2010, a former Saguaro Ranch employee testified in a deposition that favors were given to Marana town administrators. However, this was overshadowed by a 54-page federal lawsuit, filed by Steven Blomquist and Sharyl Cummings, accusing the town of violating their civil rights.

Blomquist was arrested, jailed and charged with trespassing and disorderly conduct after he sat in part of the development's McClintock's Restaurant, which is allegedly built on the easement. Blomquist said he sat quietly and ordered a beer.

In June, the Pima County Justice Court dismissed the charges against Blomquist.

"It's the second time a court outside of Marana has disagreed with Marana's wrongful actions in regards to Saguaro Ranch and the public easement," Blomquist says. "My belief is that I was not trespassing, and obviously, I was not disturbing anyone."

Neighbors continue to walk the easement in protest, and Blomquist says the Marana Police Department doesn't respond to complaints by the restaurant staff like they had in the past, although there continue to be incidents.

On Jan. 10, Phinny and his neighbors will go to bankruptcy court to see if the court accepts his bankruptcy plan, which would allow the neighbors' easement lawsuit to move forward. On Jan. 28, Blomquist and Cummings will head to federal court for the first hearing in their civil-rights lawsuit against Marana.