After years of disturbing behavior, an Arivaca man is told by a judge to stop harassing his neighbors 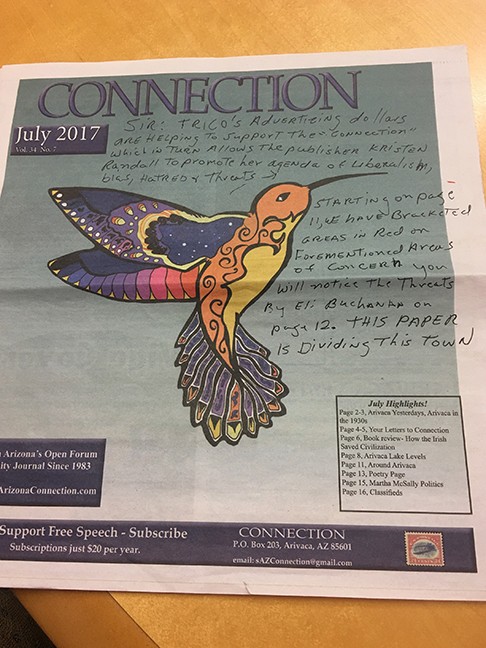 Courtesy
One of James Saeler’s letters he regularly sent to Arivaca’s monthly newspaper The Connection for the last three years.
The country's polarization of conservatives and liberals is never forgotten in the small town of Arivaca, all because one resident has made it his personal responsibility to verbally attack other residents who he disagrees with.

James Saeler, who originally went by the pen name "Arizonans Against Drugs and Illegals," began sending anonymous emails to The Connection, Arivaca's monthly newspaper, in July of 2015. He expressed his frustration with President Obama's administration and the left-leaning viewpoints held by the newspaper's editorial team and many of the town's residents.

The emails contained long-winded political rants responding to articles or editorials published in the paper. Saeler repeatedly called the staff idiots and other creative expletives and insulted a few of the females' bodies with uncomfortable detail.

This kind of response is nothing new in the business of journalism; it comes with the territory. But over the past three years, Saeler's expression of frustration has grown into relentless harassment, effectively terrorizing half the town.

Kristen Randall, an editor of The Connection and one of Saeler's main targets, said that this all started when the paper refused to run his hate-filled opinion pieces in their publication. After the staff continued to ignore his aggressive emails, Saeler started mailing open letters to residents and businesses all over town, including the companies that advertise in The Connection. It was then that the content of his messages shifted from political to personal.

"Somewhere around 2016 [the letters] started to become really personal about people in town," she said. "It really did take a turn in mid to late 2016 when [Saeler] started writing things about people, women mostly, about their bodies and about what he thought their sex lives were like. He would really concentrate on about 10 of them, and these letters would be sent to about 30 people and/or businesses every month, it could be more."

The Weekly obtained and viewed copies of all the letters, emails and even some Facebook posts made by Saeler.

In one of these open letters, Saeler claimed his "group," Arizonans Against Drugs and Illegals, must remain anonymous because "they" conduct surveillance on the town of Arivaca, reporting illegal immigrants and drug activity to Border Patrol and the Pima County Sheriff. But since Arivaca is a small town, the residents eventually discovered his identity, and after that he began signing messages with his own name.

The harassment grew worse month after month. Saeler began publicly posting the home addresses and personal phone numbers of specific people in town that he did not like. Randall believes it was an intimidation tactic, to show his enemies that he knew where they lived.

"I've always been heavily featured in his letters and harassment," she said. "I got a condo in Tucson in late 2016 because he posted my home address at the post office, and I was scared; I had just had a baby. So we got this condo to split our time between Arivaca and Tucson, and a few months later he found my address in Tucson and posted that around town."

Randall requested an Injunction Against Harassment in May 2018. It was served to Saeler, and he responded by requesting an injunction against her. Judge Ray Carroll was not convinced that Saeler required legal protection from Randall, so he called a hearing on Thursday, June 28, at the Green Valley Justice Court to bring both parties in and hear their testimonies.

Saeler did not show up to his own hearing, which had a full courtroom of witnesses and concerned community members. So Carroll dismissed his request for an Injunction Against Harassment, and listened to the testimonies of six other Arivaca residents who were also targeted by Saeler and requested injunctions.

Leesa Jacobson, a retired library employee and volunteer for a local nonprofit, People Helping People, was targeted by Saeler for her efforts to protect migrants' rights and expose racial profiling at the Border Patrol checkpoints in Arivaca.

In her testimony, she presented letters that Saeler sent to her employer, which claimed that because of her affiliation with this nonprofit, she was helping illegal immigrants, terrorists and drug traffickers cross into the US and was using library resources to do so.

After looking into the claim, the library's staff concluded that Jacobson's work as a volunteer for People Helping People was conducted away from library property. Jacobson said she is happy to be retired because her former co-workers don't have to deal with his malicious letters anymore.

Carroll granted Jacobson's request for an Injunction Against Harassment. The five other injunctions requested for protection from Saeler were also granted. Their testimonies varied from his attempts to shut down a local business because of resentment for the owner, to his public threats and rumors that he spread about people's personal lives.

Two of the individuals that gave testimonies said for years they felt afraid for their safety and the safety of their families, because until recently Saeler's identity remained anonymous, so they had no idea who was watching and threatening them.

"He believes that these women in town are inciting violence against him and that he's arming himself against them," Randall said. "He's trying really hard to not just be a pest but to ruin people's lives."

All six Injunctions Against Harassment were served to Saeler on Friday, June 29.